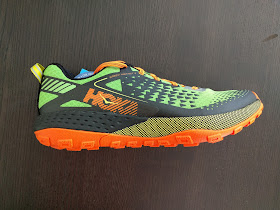 Historically, I've not felt much love for Hoka One One shoes.

They arrived at a time when the running community was enjoying a dalliance with minimal shoes, and when I first saw them, Hokas looked like clown shoes.  I dismissed them as a fad that would quickly be forgotten.

I was forced to take them seriously when they were publicly espoused by ultra-running royalty like Karl Meltzer and Dave Mackey.  However, when I tried them on, the foot shape just felt wrong.

The first Hokas that I actually liked were the (long-discontinued) Huaka.  I was given a old demo pair by the local Hoka rep, and while I still felt that the foot shape was not quite right for my feet, I really enjoyed the shoe and wore them until they had no tread left at all.

Fast forward a few years, and despite the fact that Hokas were becoming more and more dominant in the trail and ultra-running world, I continued to resist: every pair I tried on (e.g. Challenger ATR) felt shaped for someone else's foot.

However, when researching shoes to wear for Western States, I couldn't help but notice the really impressive cushion-to-weight ratio of the Clayton 2.  Although a road shoe, the outsole looked like it might have enough tread for trail use.  When I saw a Facebook photo of the great David Roche wearing Claytons at the finish line of a trail race, that clinched it.  I ordered a pair, and was pleasantly surprised.  They felt very much like the Huakas, and nothing else that I'd found came anywhere close to the weight. (~470 g/pair  8.3 oz/shoe for US M10)

Although I had a disappointing day at Western States [Editor's Note: coming back from an injury Dom finished 14th], the Clayton 2's performed well.  And the only minor issues I encountered were the lack of any toe protection (which I discovered when I kicked a root in the dark), and a few times getting jabbed by a sharp rock through the outsole cutout.  If I had to run the race again tomorrow, I'd pick the same shoe.

However, for a longer, more rugged race, like the upcoming UTMB, I want a little more protection.  So when I was offered the chance to review a pair of the Speed Instinct 2, I jumped at the chance. 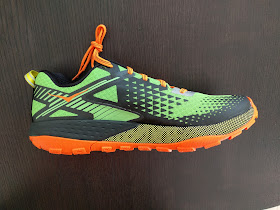 Executive summary: this is a really, really good shoe.

Now that I've got the spoiler out of the way, let me elaborate.

My initial impression was underwhelming.  I put the shoe on, and although the shape felt a little better than most Hokas, the forefoot still felt narrow, with a pointy-looking toe. 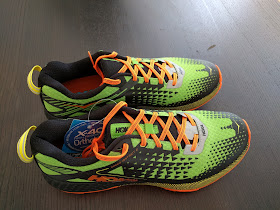 However, when I laced them up and went for a run, I was much more impressed. 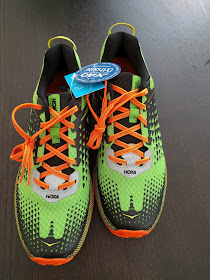 Due to some give in the upper, and the fact that the laces are stretchy, the toebox expands decently and manages to feel accommodating, if not spacious.  That's good thing, BTW, as this is the shoe that most Hoka trail athletes are going to use for races, and although a roomy toebox feels nice, you don't want to be sliding around inside the shoe on steep descents and sharp turns.

For the most part I found the shoe just disappeared.  It felt natural and comfortable and unobtrusive.  However it wasn't until I started to run downhill that shoe really shone. 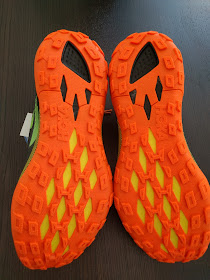 On technical descents, the grip was excellent and confidence-inspiring.   To my surprise, traction was good on steep, sandy, rocky terrain.  My foot felt secure within shoe without feeling constricted.  And -- Hallelujah! -- the heel is soft and rounded and doesn't have stabilizing wings or any other such nonsense.  I can put my foot down at an angle without the shoe trying to straighten it out.  And that means I can fly down technical descents.

The balance between rock protection and ground feel is excellent.  I felt that I had good sensation of what was going on under my feet, but also was able to stomp down on sharp rocks and prominent pebbles without feeling any pain.

I liked also the fact that the sides of the outsole are rounded and not sharp-edged.  The edge of my shoe often grazes my calf, particularly when I'm tired, and it's nice when the shoe doesn't feel like a lethal weapon!

The shoe has a low drop (3 mm) and runs well with either a toe or heel strike,  allowing rapid switching between the two -- which may be a big factor in why the shoe feels so nimble.

The heel counter is stiff but low, extending only about halfway up the heel collar.  It works well, stopping sideways slipping of heel while still allowing good ankle angulation.

On the short sections of pavement that I've run, the Speed Instinct 2's felt fine.  My only quibble is that the shoe has a 'flat spot', making the transition from heel to toe just a little more effort than a softer, more rockered road shoe.  But this is clearly not what the SI2 is designed for, and I'd happily trade this for the upside in stability on uneven surfaces.

Another minor issue I encountered is that the tongue has a tendency to wander off slightly to the (lateral) side.  It's not a big problem because the tongue stops before it has slid far enough to stop providing protection from the laces, but it does seem like a curious oversight.  Other manufacturers have taken different strategies to keep tongue centered: the Nike Terra Kiger has a burrito-style construction; Salomon shoes typically have a fully gusseted tongue; Montrail use two lace loops.

This is an outstanding trail shoe that will please nearly everyone.   The slightly wider, stretchy toe box will accommodate all but the widest feet or those who insist on extra room to waggle their toes.

Similarly the amount of rock protection will make nearly everyone happy.  I found that there was enough to charge with confidence over all but the most insanely unpleasant rubble.

But beyond such mundane aspects, the shoe just feels fast and fun.  On dry, loose, steep terrain, they feel nimble and grippy and (like the Hoka slogan) ready to fly.

I would wear this shoe over almost any surface and distance.  After a week of running in them, I'm pretty sure this is the shoe I'll wear at UTMB.

Although this feels like a race shoe, it is equally competent as a daily running shoe.

Hoka Speedgoat 2.  Although two trail shoes from the same brand, these are very different beasts.  The Speed Instinct 2 is more to my taste than the SG2.  The SG2 has poorer ground feel, and feels cumbersome in comparison.  But the Speedgoat provides more grip and more protection and would probably be a better choice for a 100-miler or for rough terrain.  The Speedgoat upper has noticeably less stretch. Weights of two shoes are remarkably similar: for US M10, Speedgoat 2 is only 8 g  (0.3 oz) per pair heavier (594 g vs 586 g), about 1.5% more.

Nike Terra Kiger 3.  I haven't tried version 4 yet, but Sam reports only minor changes from TK3.  The Terra Kiger in its various incarnations has long been one of my favorite shoes.  In terms of shape, the TK3 is a better match for my foot and may have the edge in stability.  The TK3 also has better midfoot hold.  However, the Speed Instinct has more cushioning and rock protection.  I've found that my feet start to ache in the TK3 after about 50 miles of trail: so I don't chose them for runs longer than 100 km.  I'm hoping that the Speed Instinct will still feel good for 100 miles, although the longest distance I've worn them so far is a trail marathon.  Mud/snow grip is likely better with Kiger due to larger, more numerous lugs.  Again both shoes are pretty much the same weight: I have two pairs of TK3's; one is the exact same weight (586 g) as Speed Instinct test pair, the other is about 20 g lighter.

Altra Lone Peak 3.5.  [RTR review] A little heavier than the two shoes above, around an ounce per shoe, the Lone Peak is a seasoned veteran of trail running.  I've worn the 3.0 version for several hundred-mile races, and I know that if I wear this shoe in a ultra, I'm not going to have any foot problems.  However, zero-drop shoes are not to everyone's liking, and nor is the wider Altra toe-box.  (Though the LP3's fit noticeably snugger than most Altra shoes.)

The Speed Instinct was provided at no cost. The opinions herein are entirely the author's.
Comments and Questions Welcome Below!
Visit our Index Page here for over 60 of in depth 2017 shoe and gear reviews
Visit our 2018 Previews Page here for 2018 run shoe, apparel, and gear previews