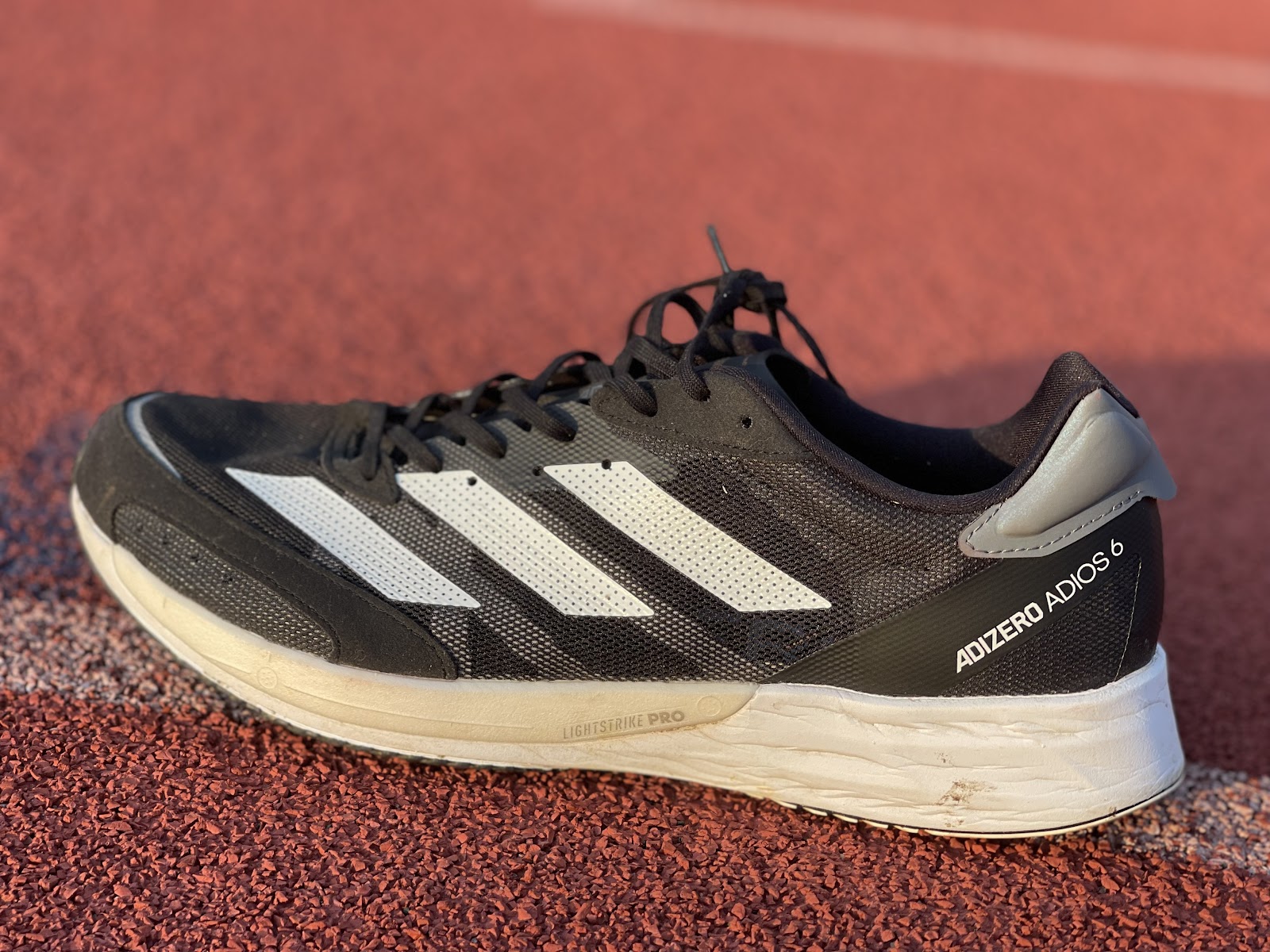 The Adidas Adios 6 is the latest in a long line of traditional, yet innovative racing flats.  Adidas describes them as “Lightweight Running shoes for Racing and Training.”  Adidas has increased the stack height to 32/24 from the 23/13 of the previous Adios 5.

Featuring the same Lightstrike Pro as in the Adios Pro in the forefoot/midfoot and EVA Lightstrike in the heel, the Adios 6 is a lightweight trainer featuring some of the same technologies as the latest marathon racers.  I haven’t run in an Adidas shoe for a while (my last one was years ago with lots of Boost), and while this one seems completely different in pretty much every way, I’m really excited to run in it.

Adam: Wonderful damping and rebound from the Lightstrike Pro in the forefoot

Adam: Snappy and direct yet not harsh ride, puts a smile on your face to run in

Adam:  The lack of stack height and rocker means that your calves and quads and feet have to work a little bit harder, probably good for you though

Adam:  Could maybe use a tiny bit more padding on the tongue

$120. Available now including from our partners Running Warehouse here

Adam is a cross country ski racer from New Hampshire.

Along with skiing, he’s a big fan of endurance sports in general and does a lot of running.  He’s much faster at skiing, recently participating in the  Covid curtailed NCAA’s skiing for Dartmouth College, but can run a 4:43 mile (in trail shoes), 16:20 5K in endorphin pros), and has won a few small trail races you’ve never heard of.  His mileage varies depending on how much snow is on the ground, but he trains about 700 hours a year including 1200 miles of running and 4000 miles of skiing and roller skiing.  You can follow him at his IG: @real_nordic_skier, his blog: https://adamglueck.wordpress.com, & on Strava https://www.strava.com/athletes/9267222 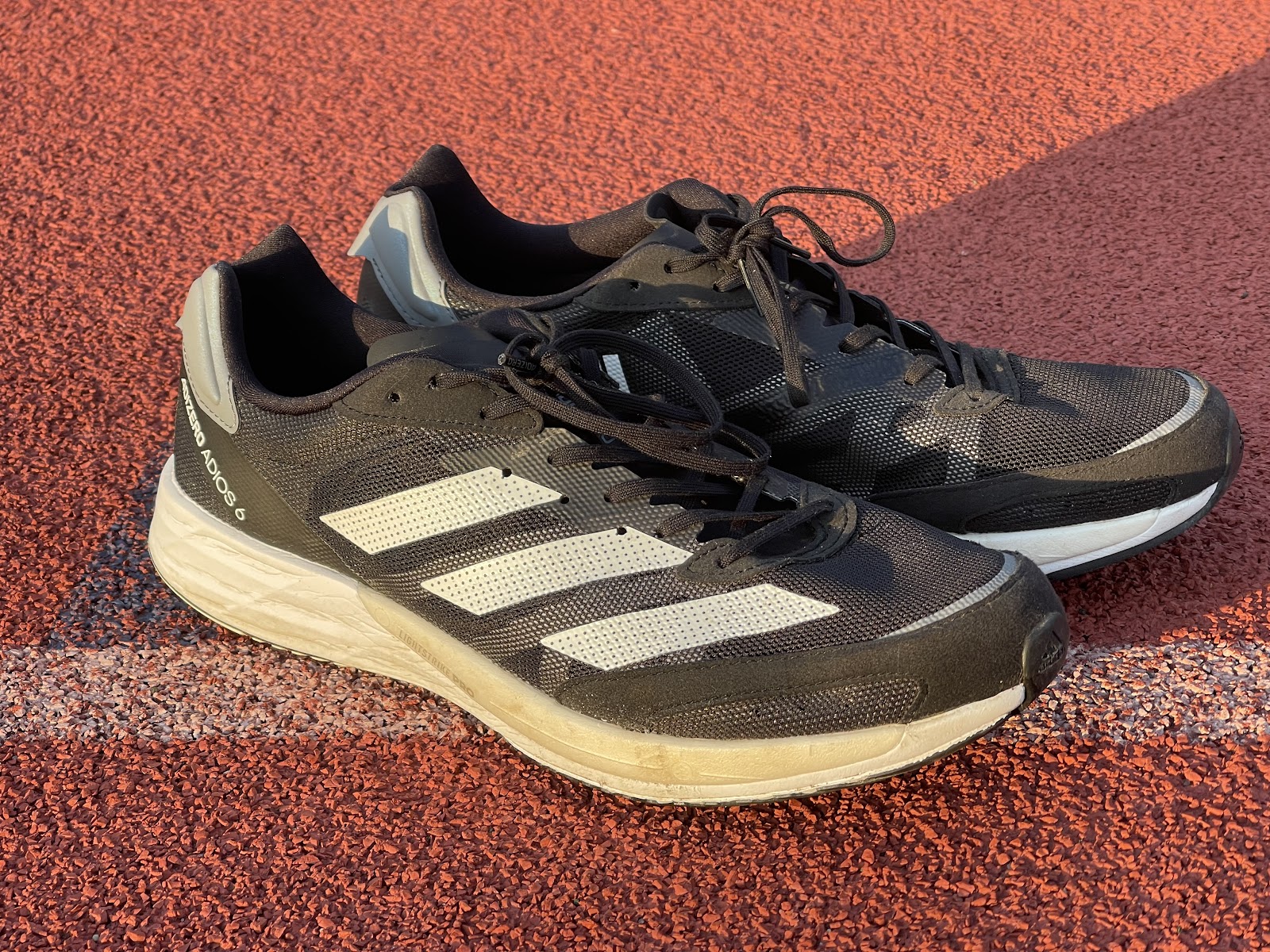 Out of the box, the Adios 6 looks fantastic.  It’s a striped back racer, with a clean white on black color scheme.

I could wear these casually and at a track workout and they’d excel at both.  On the foot the upper feels thin, breathable, and not particularly stretchy, leading to excellent lockdown. 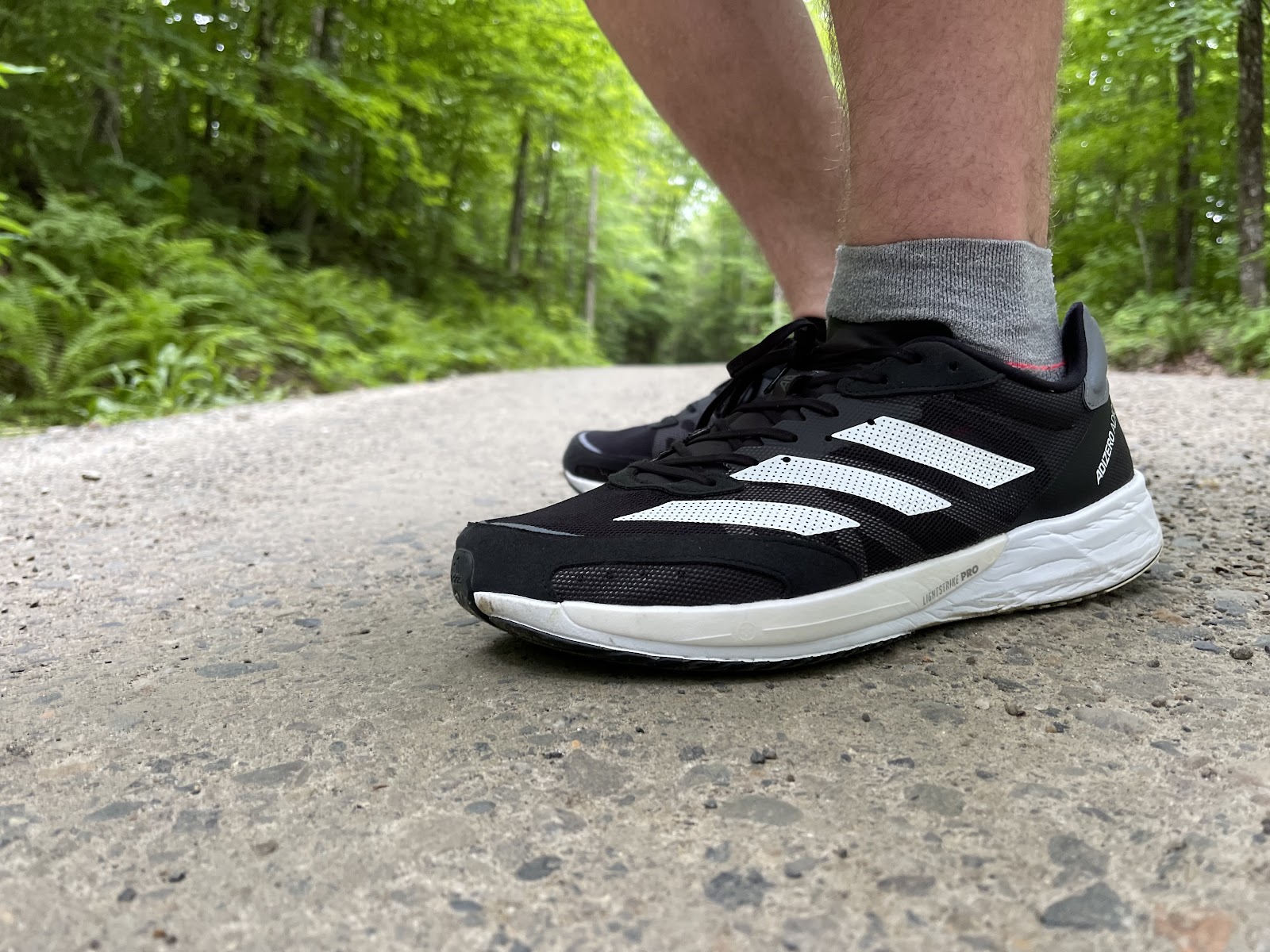 Walking around I can tell that the heel is firm while the midfoot and forefoot is smooth and bouncy. 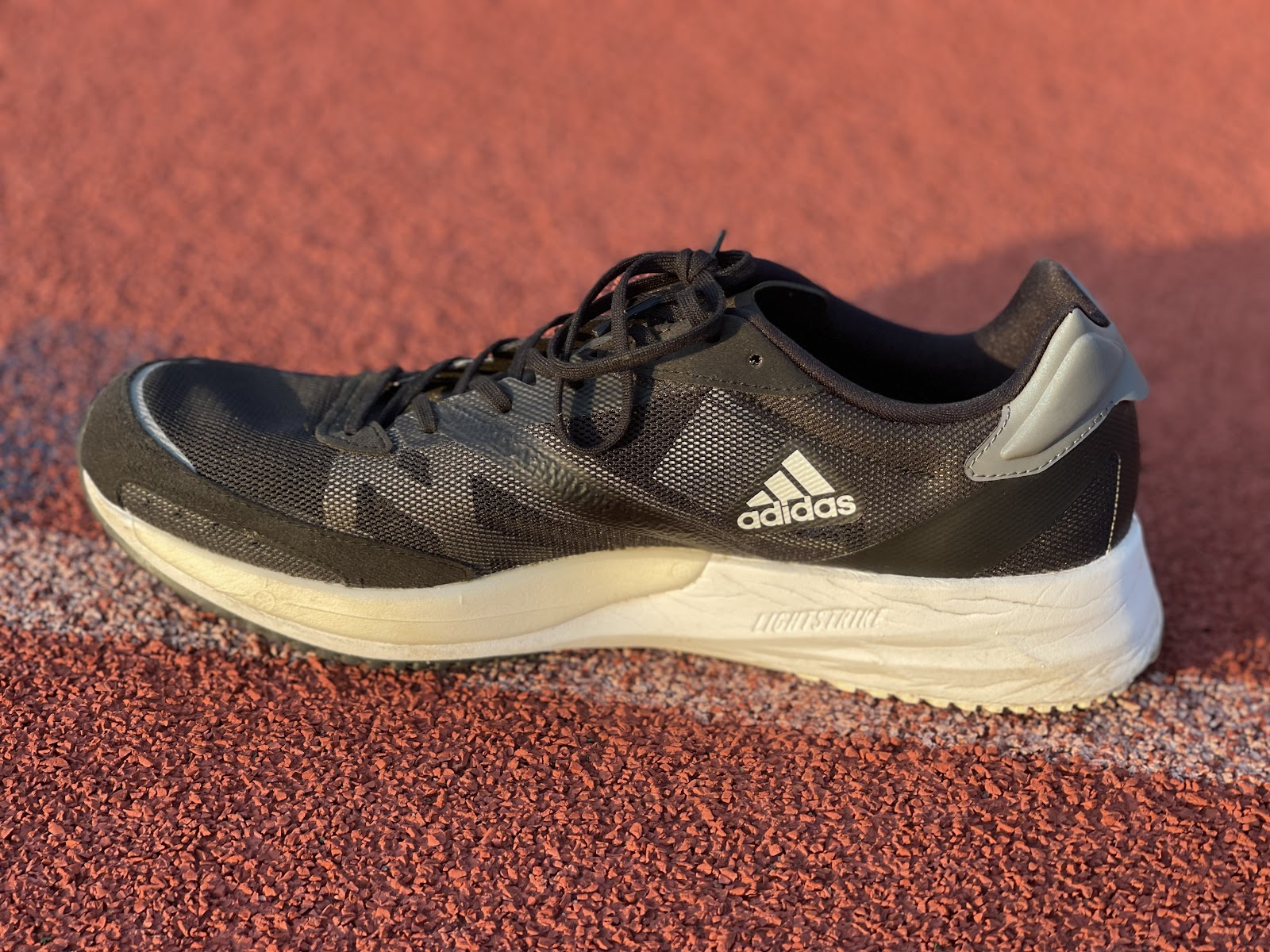 The Adios 6’s upper feels like that of a racing shoe.  It's an extremely thin mesh, yet rigid enough to have some structure.  The upper itself is thin and makes the foot look noticeably smaller than many comparably priced shoes (like the Nike Pegasus 38).  While my black version isn’t the most see through, I assume the white version would be.  I had some issues with heel slip, but Adidas included an extra eyelet further up that allowed me to adjust the lacing.  With this fix, I found the comfort and fit of the upper excellent.  It’s very breathable as well, and wicks sweat effectively on hot days.  Durability seems good so far, but the upper is quite thin and I could potentially see it being an issue over time. 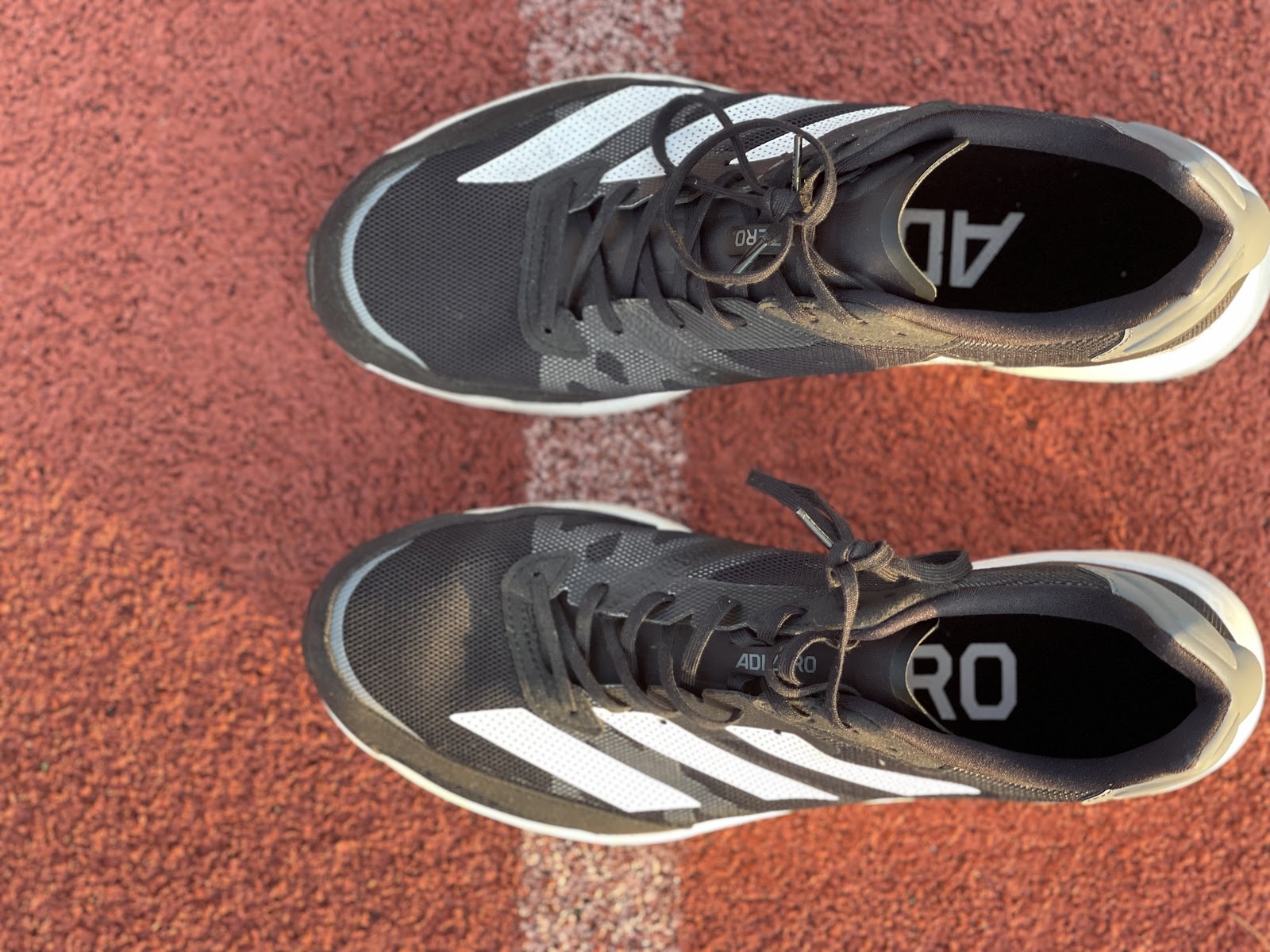 The tongue could use a little bit more padding, as when using the extra eyelet, the laces can press a little bit into the top of the foot.  I didn’t notice it over the course of my run. It could be slightly improved .  The heel has a pull tab featuring extra padding, yet is low enough not to aggravate my achilles.  This is an excellent upper clearly designed with maximizing breathability and minimizing weight in mind.  It matches the lightweight and precise personality of the shoe. 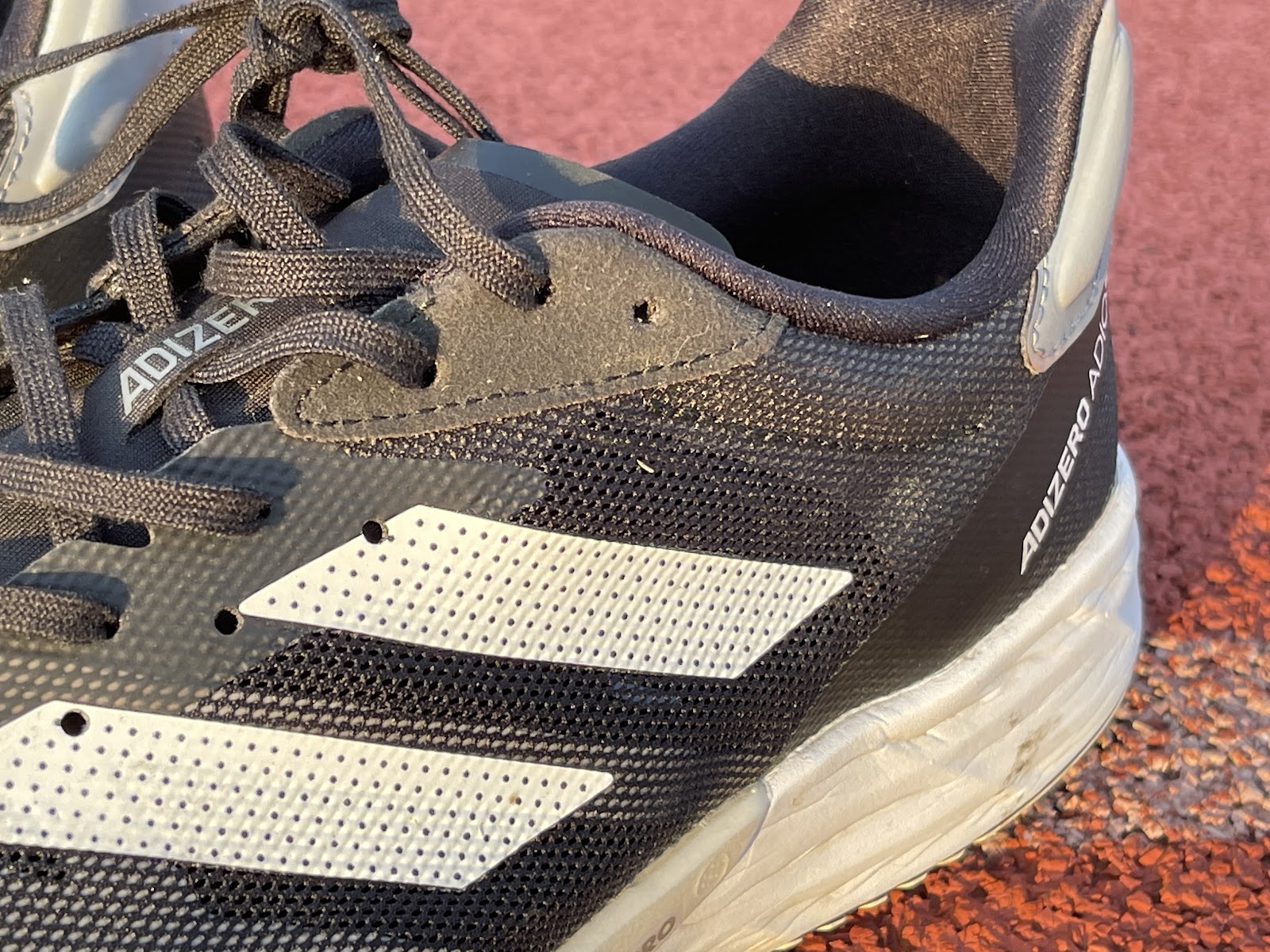 When you first see it, you think that it’s almost all Lightstrike, because it wraps around the entire base of the shoe, but when you look at the outsole, you can see that the Lightstrike Pro insert in the toe goes all the way from the upper to the ground.

This means that except for the stabilizing ring of Lightstrike around the toe and sides, you’re running almost entirely on Lightstrike Pro at the midfoot and to the front.  This differs from shoes like the Boston 10 where the entire layer above the outsole is Lightstrike, even if there’s an insert of Lightstrike Pro above it.

As a result, the feel of the midsole differs depending on whether you’re in the Lightstrike or Lightstrike Pro section.  If this entire shoe was Lightstrike, I think I would’ve found the midsole responsive if a little hit jarring and lacking the rebound that a softer foam could provide.

A black plastic Torsion System wraps around either side of the lightrike pro, further stabilizing the shoe and stopping the transition between the foams from feeling disjointed.

The Lightstrike Pro foam however greatly improves the character of the shoe.  It has impressive damping and rebound, without feeling soft, mushy, or uncontrolled.  While the midsole isn’t rockered, the firmness of the Lightstrike combined with the plastic torsion system on either side of the Lightstrike Pro make the shoe remarkably stable despite it’s narrow midsole and reasonable stack height. 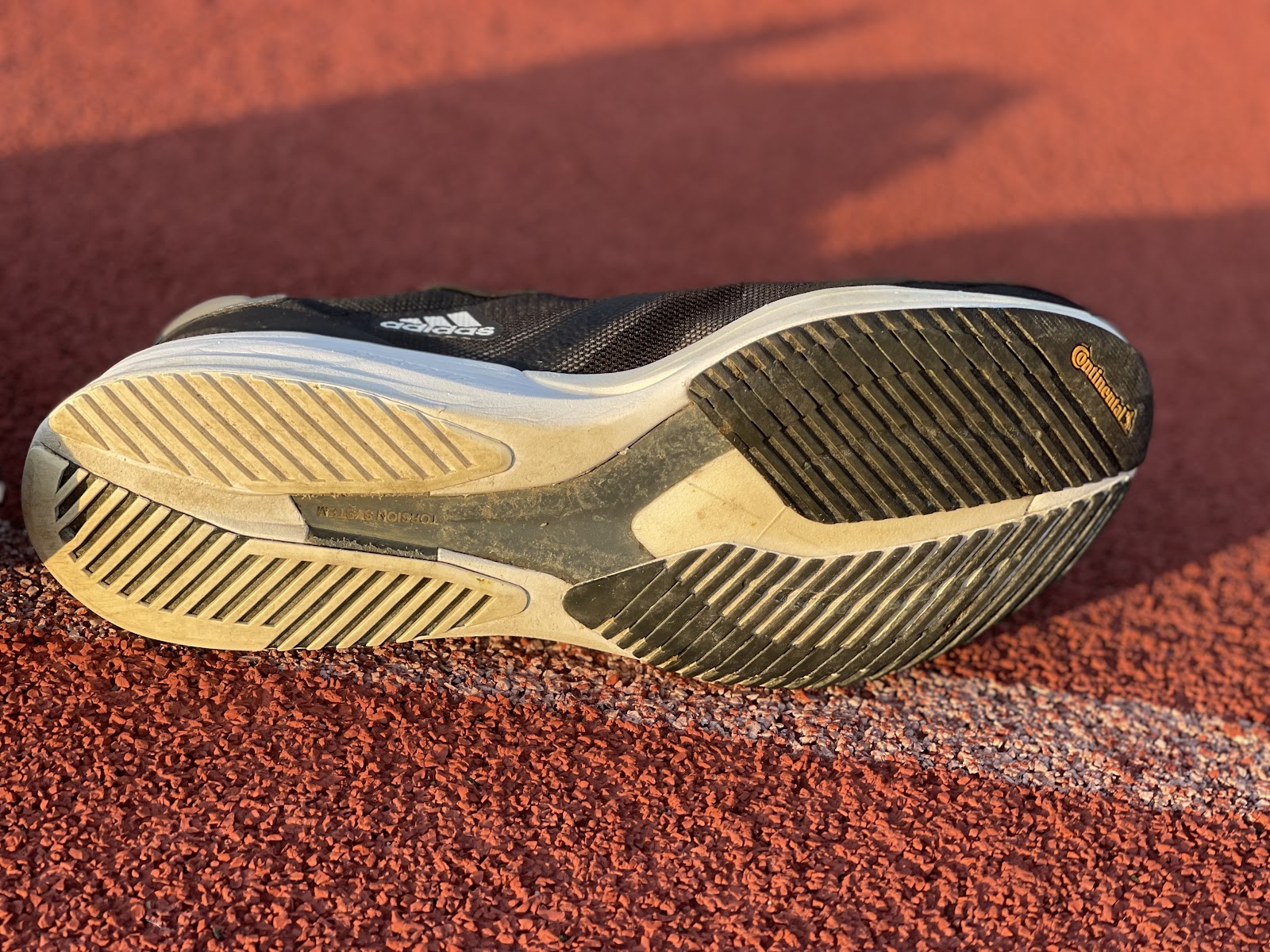 I’ve heard frequent stories about how the “Continental Rubber outsole on Adidas road shoes was incredible, but hadn’t had the chance to test it until now.  I can now confirm that this is the case as not only is the outsole on the Adios 6 light, it’s ferociously grippy.  I used to do most of my short road races in lightweight trail shoes (The Salomon S/Lab Sense 5, and 6)  because I found that the traction provided by soft trail lugs was aggressive enough to transfer power better. 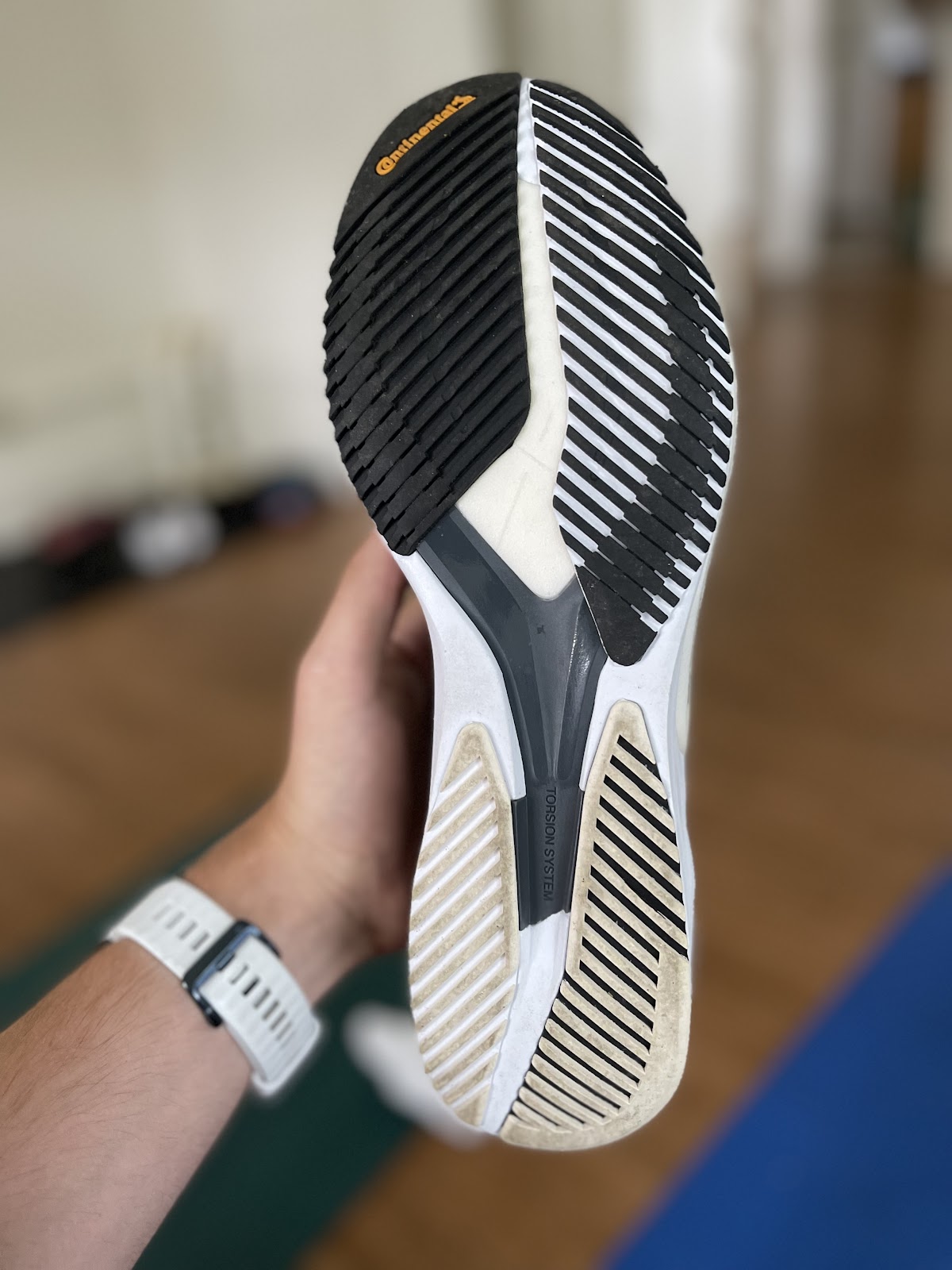 I had forgotten just how nice it was to have a true road shoe that could latch onto the ground for acceleration, turns, and wet weather. It is truly lovely! I even took these on an 8 mile run on dirt roads, gravel, and light trails. 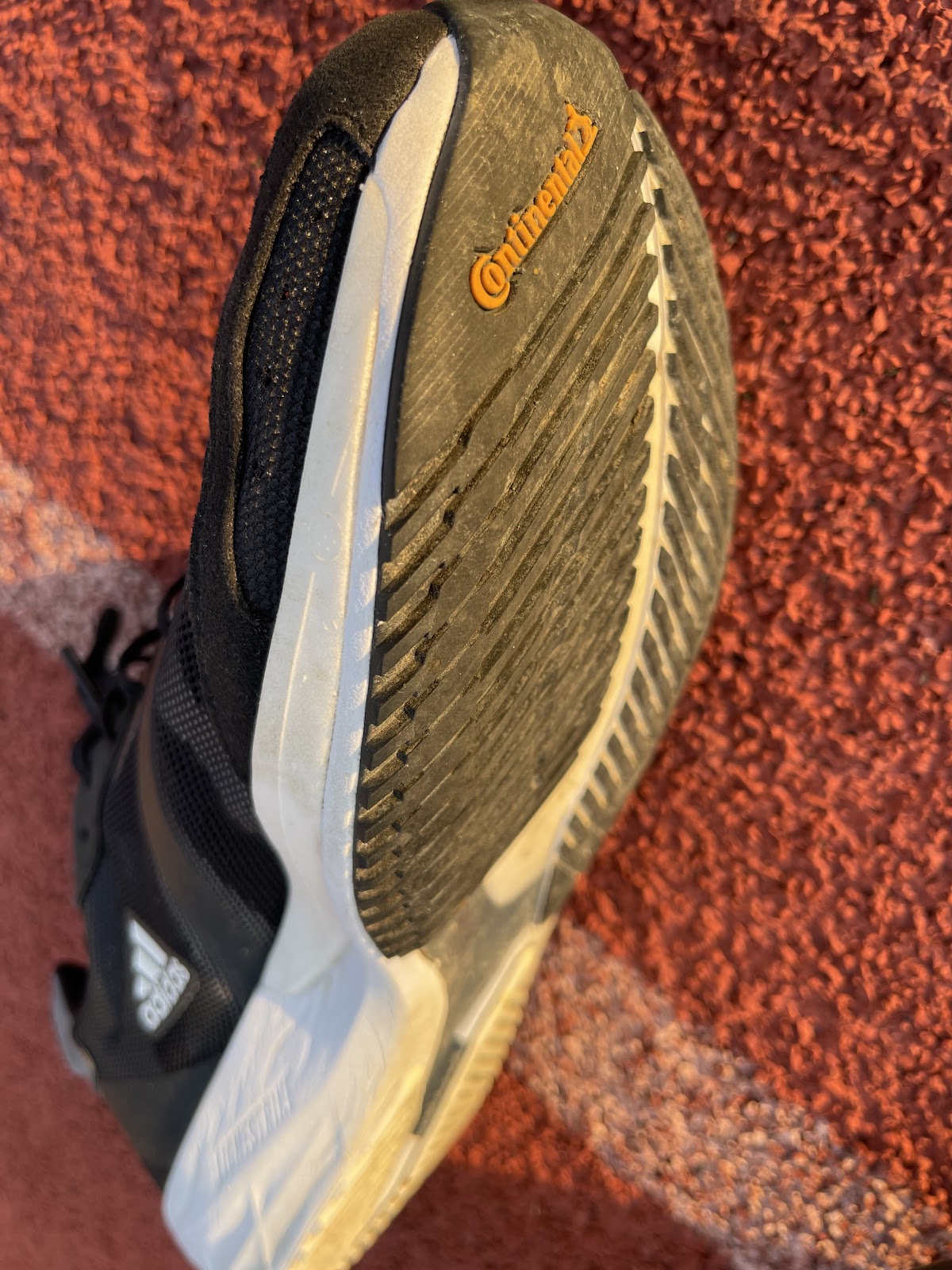 My only complaint is that there is a section of exposed Lightstrike Pro in the middle so I’d be concerned about the durability in trail conditions because of that.  However, this is intended to be a road shoe, and the traction for that is impeccable.  I don’t have enough miles on them yet to comment on durability, but haven’t seen any noticeable wear so far.

With pretty much everyone racing in a high stack height, bouncy, plated super shoe these days, I wasn’t sure how much fun it’d be to go back to a “traditional racing flat.”  With two foams in the midsole, I wasn’t sure whether the character of the ride would be dominated by the Lightstrike (EVA), Lightstrike Pro, or some combination thereof.  I’m glad to report that the two foams blend together beautifully to create a cohesive and greatly enjoyable ride.  Hard heel striking in these shoes isn’t that fun, but as soon as you get to the midfoot and forefoot, they’re incredible.  The heel is firm, but not overly harsh due to the stack height of the Lightstrike there.  Because the Lightstrike Pro up front is softer, they compress more in the front, complementing the 8mm drop and rocking you toward the toe, then rebounding  all together launching you forward.

The shoe is still flexible and very much unplated, working your calves and feet and letting you feel the ground, but it turns over quite quickly.  The Lightstrike Pro also has an impressive dampening effect, leading to a much less harsh and more bouncy feeling than pure EVA shoes.

Additionally, the grip on the Continental Rubber outsole helps the shoe lock onto the ground and accelerate at toe-off. Although the midsole platform is narrow, it’s firm enough with a low enough stack height and good enough grip to feel remarkably stable.

The Adios 6 feels far more controlled than something like a NB Rebel V2 (due to the Lightstrike heel and collar around the base of the Lightstrike Pro insert, yet with a snapiness and turnover that reminds me of super shoes with 10mm more stack height.   In short, the Adios 6 reminded me of all the things I loved about those low stack, traditional racing flats, with enough modern materials and engineering worked in to create something truly joyful to run in. 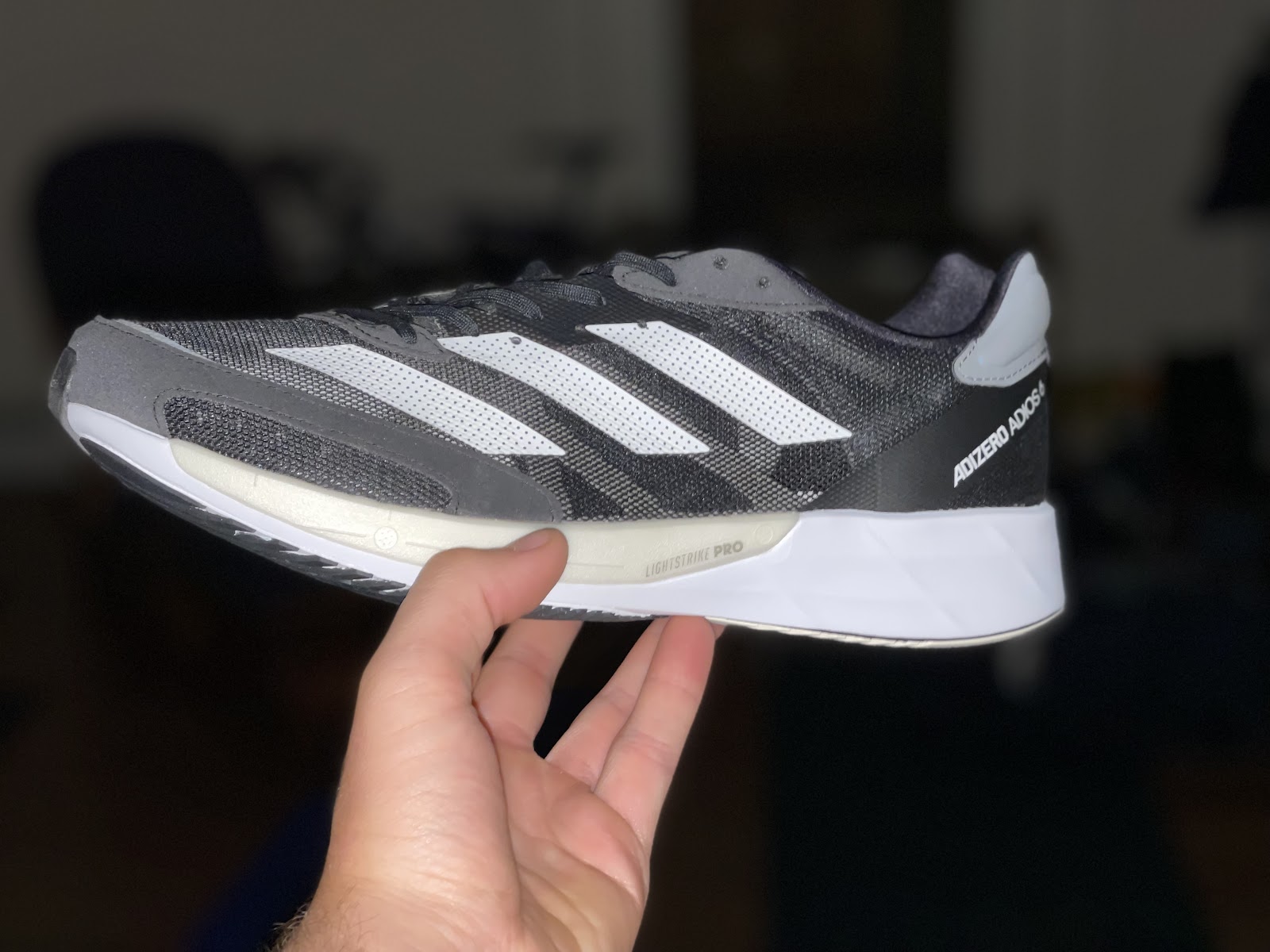 The Adios 6 is a fantastic modern interpretation of a traditional lightweight training and racing shoe.  It has a comfortable, precise, and breathable upper, a smooth, stable, and responsive ride, and a ferociously grippy outsole adding up to one of the best unplated shoes I’ve ever tested.  Although for runs longer than a half marathon and most racing I’ll probably stick to my favorite plated super shoes, I think it’s enjoyable and important to keep my feet and calves strong by running in something without a plate and rocker.  The Adios 6 is an excellent shoe for medium-fast training and racing that doesn’t make me feel like I’m missing something fun by forgoing a plate and higher stack height.  The low to the ground, direct, and snappy ride puts a smile on your face and makes you want to go fast.

Index to all RTR reviews: HERE

The Rebel V2 is my other favorite unplated training and racing shoe, and they take completely different approaches in pretty much every way.  Both have excellent uppers, fit TTS for me, and are incredibly fun to run.  The Rebel V2 is more flexible, softer, and bouncier all around with  the Adios 6 feels more directed, stable, and efficient.  On the track and for shorter races, I think the Adios 6 would be faster, even if the Rebel is more fun to run in.  I can’t pick a personal favorite and plan to keep running in both of these shoes, but if you want the softest bounce, go for the Rebel, and if you want better stability, controlled propulsion, and snappiness, go for the Adios 6.

The Sonic 3 Accelerate is also a lightweight trainer with mostly EVA foam and  features a vibration dampening Obtivibe insert at the heel which actually makes the ride smooth in a way similar to the Lightstrike Pro in the forefoot of the Adios 6.  This Obtivibe insert gives the Sonic a smoother heel strike that feels better on descents but that’s pretty much the only thing I prefer about it, and the Accelerate used to be a big favorite.  The upper, weight, ride, and outsole all feet better on the Adios 6.

The Adios 6 feels like what the Pegasus 38 should have been.  First, the upper of the Adios is far more precise, light, and minimal.  The Pegasus may be more durable, but it just doesn’t feel as premium or fast, that is in part is due to how much heavier it is.  Both feature a special cushioning feature under the mid/forefoot (Lightstrike Pro in the Adios 6 and an Air Zoom unit in the Pegasus), but for me the Air Zoom unit just adds harshness to the response while the Lightstrike Pro genuinely adds both smooth damping and propulsive energy to every stride.  While the Pegasus is a more cushioned shoe and definitely more versatile for walking around, it doesn’t put a smile on my face the way the Adios does, and the Adios 6 is clearly better at going fast. The Adios 6 is an excellent value featuring a sizable chunk of Adidas’s best foam with a premium upper at the same price point as the Pegasus.