The more minimal a shoe is, the more critical each component becomes. Designing performance shoes with such constraints is an art that, although nearly abandoned by most brands, has been maintained and perfected among the Asian racing flats. With these shoes, there are no gimmicks, no super foams, and no carbon fiber plates. And among them, the ASICS Tartheredge is a pinnacle of design that beautifully mates performance with classic style.

The Tartheredge is actually a model among the Tarther series of racing flats, including the Tarther-Japan and Tarther-zeal. “Tarther” doesn’t mean anything in any language, but this series’ name in traditional characters is 虎走, meaning “tiger run” - perhaps hinting at how these shoes are meant to be worn. Extremely porous upper has little to no rain protection

Comes alive only in higher paces and turnover

Right out of the box, the Tartheredge is unique, appearing like a shoe out of the 90s. There’s synthetic leather connected with simple, open mesh like the type found on trucker hats. At first glance, this approach appears to be uncomfortable. Leather and mesh: sounds like a stiff, inflexible construction. Yet the opposite is true upon first wear.

Relatively unknown in the West, the Asian last is a design popular among many of ASICS’ classically shaped shoes. These lasts are typically shaped with a larger and shorter toe box that quickly tapers into a narrow heel. The closest approximation in the U.S. is Altra’s fit; another is New Balance’s 2E fit.

The Tartheredge applies the Asian last with a sizing that is similar to a US-E fit with a slightly wider toe box but shorter overall length. The shoe should fit true to size but roomy for regular-footed runners, slightly hugged to those with wide feet, and overly roomy for narrow-footed individuals. Hence, those with narrow feet can be recommended to go a half size down, but caution should be taken given the shorter last.

Faux leather material is strategically used to create lightweight structure around the midfoot while providing specific openings for the mesh, especially around the toe box. These openings are anatomically aligned to where the toes splay, allowing the upper to gently stretch around the forefoot while running.

The heel counter has a similar effect. It’s anatomically molded, making it slightly difficult to step in at first. But once in, the feet feel completely secure, accompanied by a smooth feeling from the leather-like material. ASICS has done a superb job of creating a locked down yet gentle-as-air sensation. 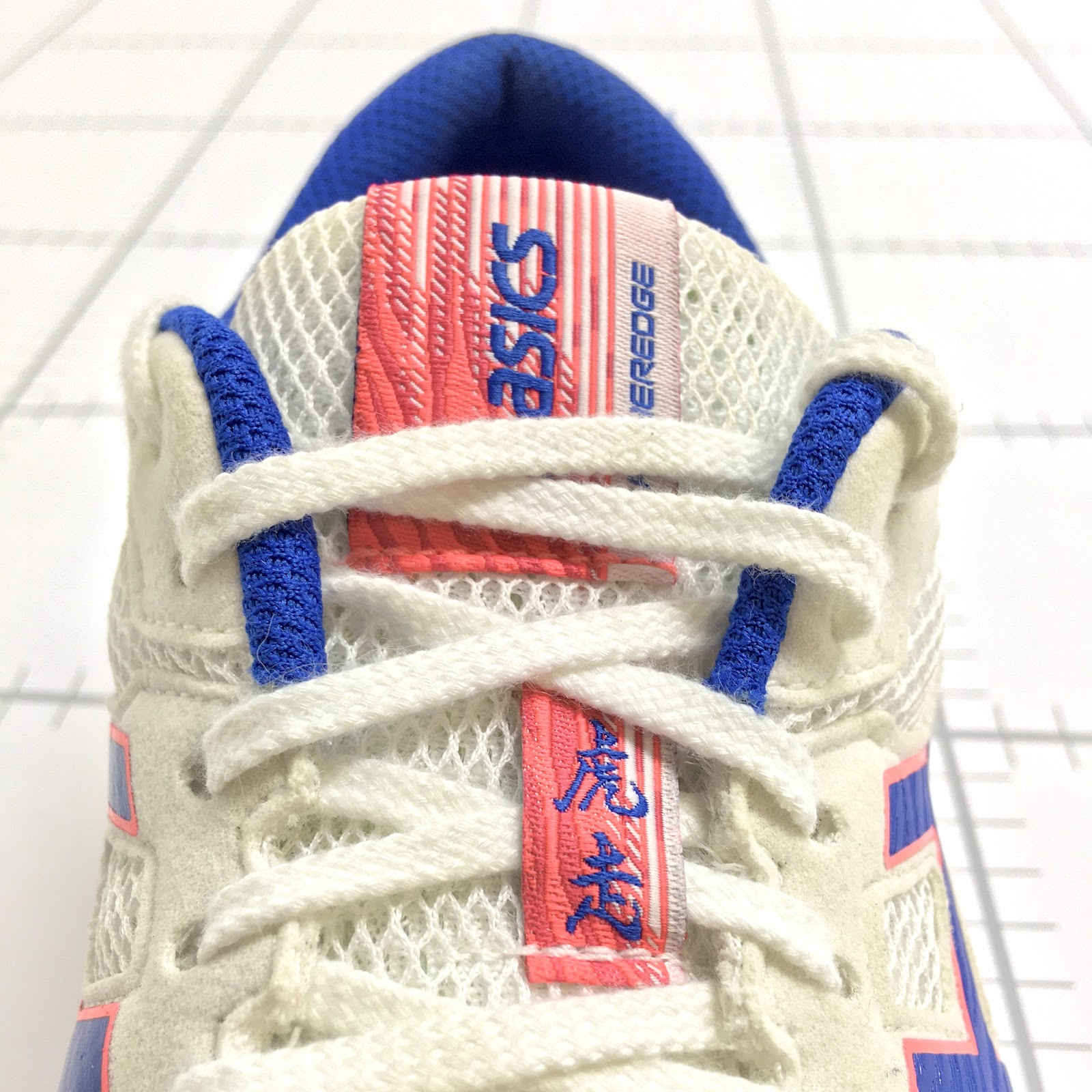 Taking full advantage of FlyteFoam Propel, the midsole feels more cushioned than it is. This particular blend of FlyteFoam is softer than those found on typical ASICS shoes and is far softer than others in this category. If the REVlite on New Balance 1400s has a softness of 3/10, then the Tartheredge’s foam has one of 6/10.

In addition to being soft, the shoe is also incredibly reactive, not in the bouncy Vaporfly kind, but in the responsive kind. The midsole works with the runner to efficiently compress and rebound. This sensation is not the type where more downward force produces more bounce-back, but the type where the more efficient the gait cycle, the snappier the performance. Much of this is also due to the unique outsole design, discussed shortly. 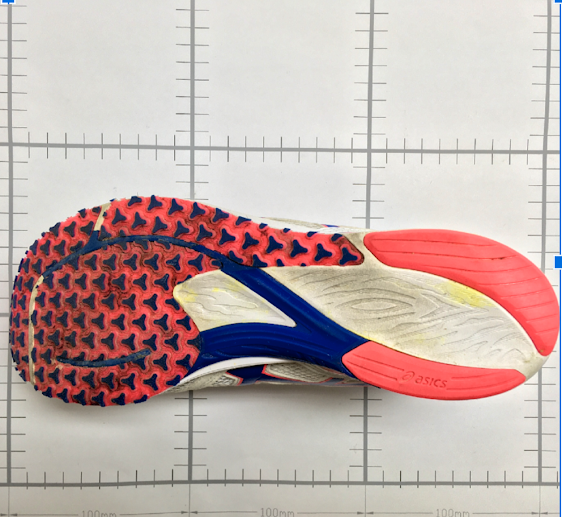 Dual Stencil Process, DSP: this is something rarely seen among brands and is heralded as a top-of-the-line outsole feature. It certainly lives up to its reputation.

DSP is an outsole technology that is proprietarily owned by one supplier in Japan. Therefore, the DSP used on a pair of Tartheredge comes from the same factory as the one used on the now-discontinued Mizuno Wave Universe or any other authentic application of this technology. The material is effectively a multilayered injection of high-grip rubber pods on a fabric-like substrate. This creates islands of individual rubber dots that can grip the road with a degree of independence from each other. The effect is a sticky, grabbing grip that even provides a noticeable cushioning effect. ASICS applied DSP mainly to the mid-to-forefoot aspect of the outsole. Striking at this area produces a crisp feeling of gripping the road accompanied by a crunching feeling (and sound) as the feet transition to toe-off. 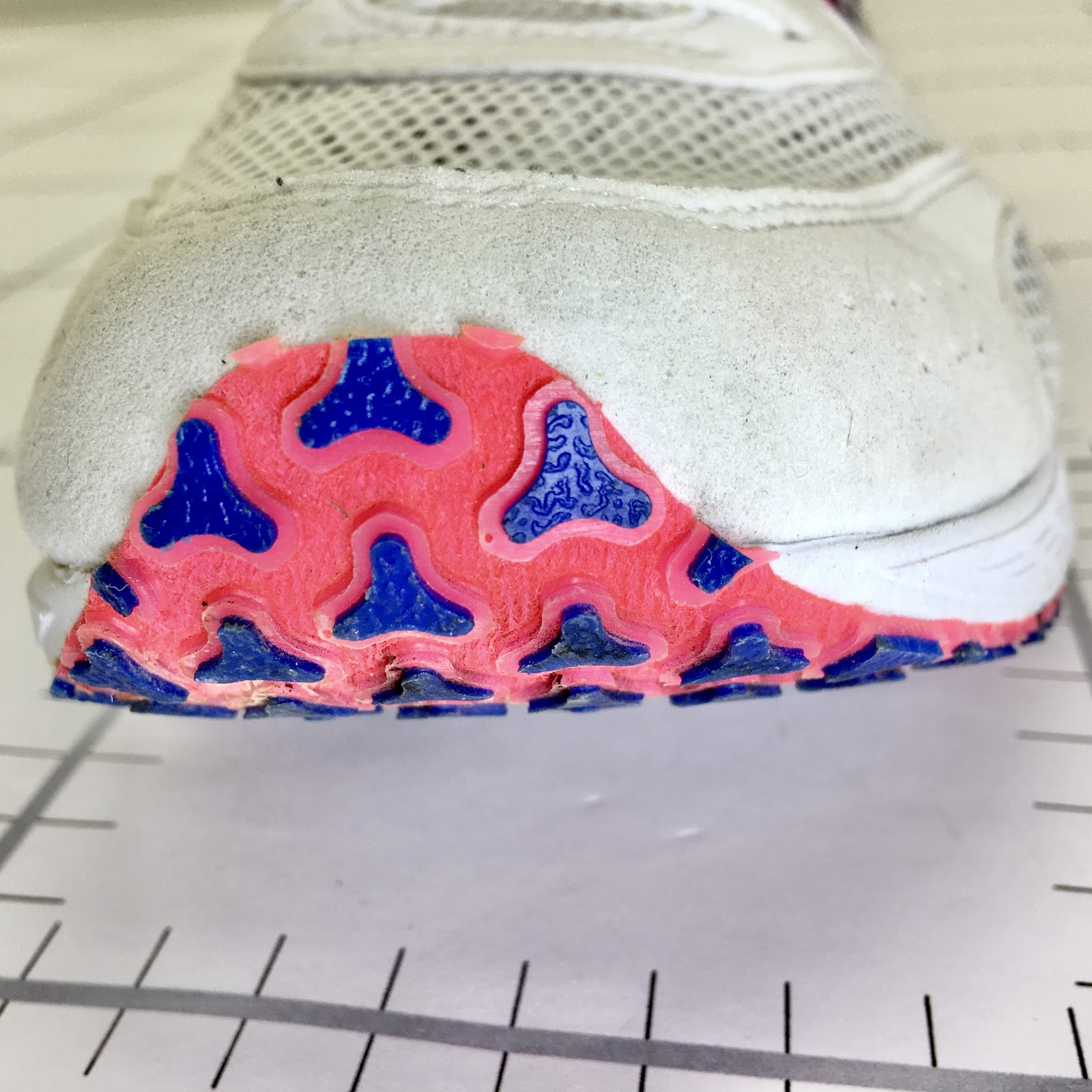 At the midfoot is the Trusstic system, which acts to stabilize the shoe while providing a noticeable snap. This is done by extending forked plastic segments into the forefoot, effectively acting as tension rods. While this may sound gimmicky, its effects can absolutely be felt not in the sense of having additional stiffness, but more in the way of responsiveness. Part of what makes a shoe feel unresponsive and sluggish is in the midsole not quickly re-shaping and following the feet throughout the gait cycle, especially noticeable during higher paces. The Trusstic system solves this by constantly snapping the midsole back to its original shape just in time for the feet to strike again. The feeling is one of the sole constantly hugging the foot without being overly stiff. Compared to the Takumi Sen 6, the Tartheredge is far gentler with its snap-back implementation whereas the former’s stiffer approach can become tiring.

ASICS High Abrasion Rubber (AHAR) is basically a hardened rubber and is applied in the rear. While AHAR is far less grippy than DSP, it is also far more abrasion resistant, hence the name. DSP can begin to wear off or even fall off before 100 miles, especially when one is doing many workouts. AHAR, on the other hand, doesn’t even show wear until 100 miles. Heal strikers can be confident in its longevity. While DSP, AHAR, and Trusstic can sound like overly hyped marketing memes in all CAPS, the true magic comes from the detailed tuning of their implementation.

Any brand could slap midsole shanks and DSP onto the shoe and produce similar marketing effects, but ASICS clearly took the design to another level. For instance, the DSP and Trusstic mirror each other at the midfoot with the pods on the lateral side and plastic bridge on the medial side. This makes anatomical sense in that runners at higher speeds tend to land laterally, pronating inward to spread impact forces before moving into toe-off.

The design’s lateral DSP provides the landing grip and the medial bridge assists in the transition. Further, there’s an additional outsole groove at the forefoot where the Trusstic forks stop, providing just enough additional flexibility at the toe without sacrificing the effects of the snap-back. It’s in these fine tunings of details that truly make the Tartheredge a step above its competition.

While the drop is officially 10mm, the ride feels a lot closer to 6mm. Part of this is due to the relatively soft foam allowing more sink-in and dispersion of pressure. There is plenty of rear stack to allow heel strikers to comfortable land and for forefoot strikers to tap-off when needed.

We live in a golden era of running shoes. Since the original Breaking2 project, brands have been releasing iteration after iteration of wonderfully fast super shoes to the point where the IAAF/WA had to implement limitations on the technological arms race. In this rush to maximal stack heights, the art of making racing flats has been quietly continued by a few. Here, it’s refreshing to see ASICS maintain this tradition; and in fact, at the time of this writing, there is already a second generation Tartheredge with an updated upper.

Looking back to previous generations of the Tarther series, one can observe that ASICS has been making stepwise improvements on this platform, slowly tuning and perfecting it over time. The Tartheredge is truly a unique shoe that represents a pinnacle of classic heritage. It is a perfect companion for those interested in training with a low-to-the-ground, light, yet protected shoe. 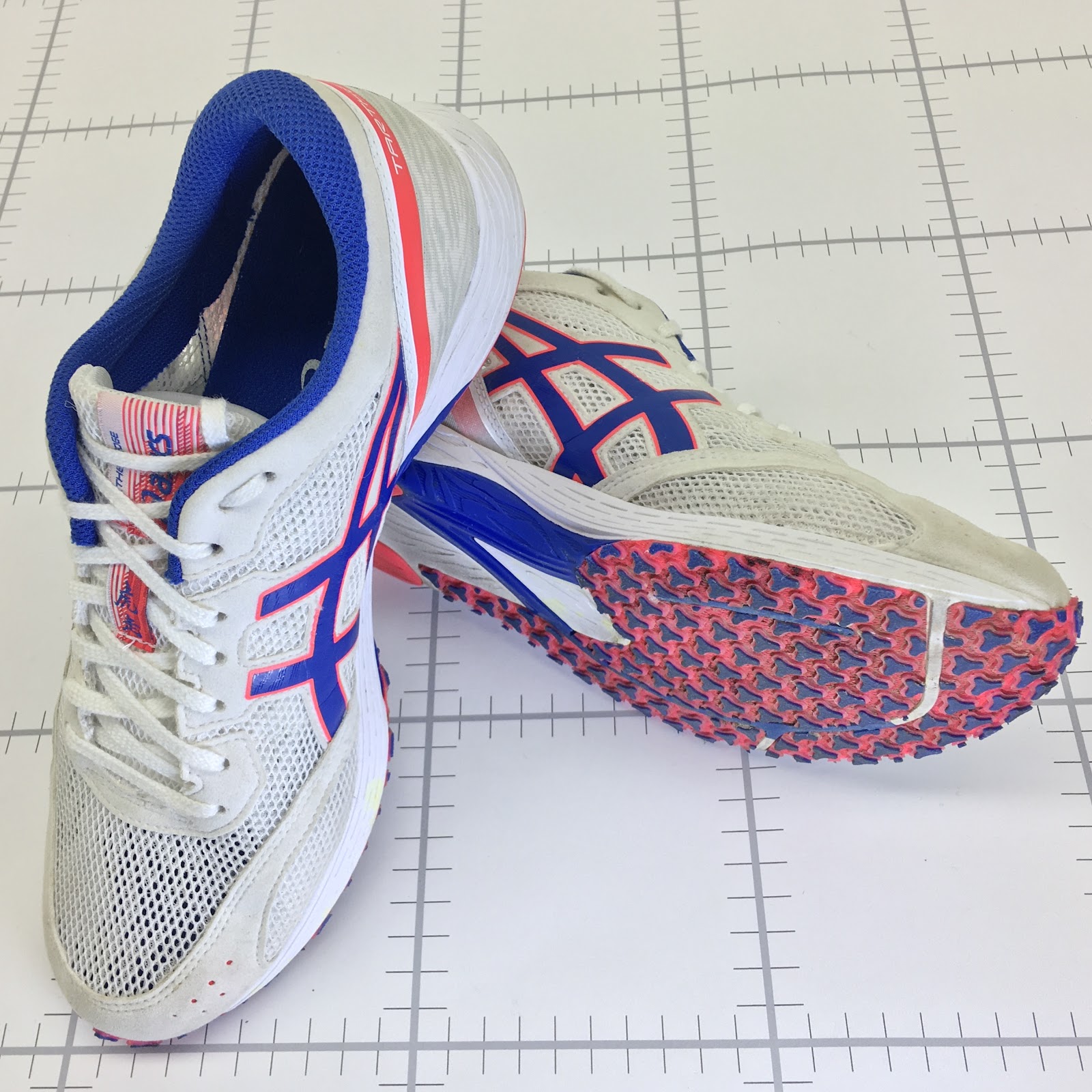 Value is low due to the compromised durability inherent to DSP and the narrow range of training for which this shoe shines. However, the classic white ASICS Tiger style is a look to behold!