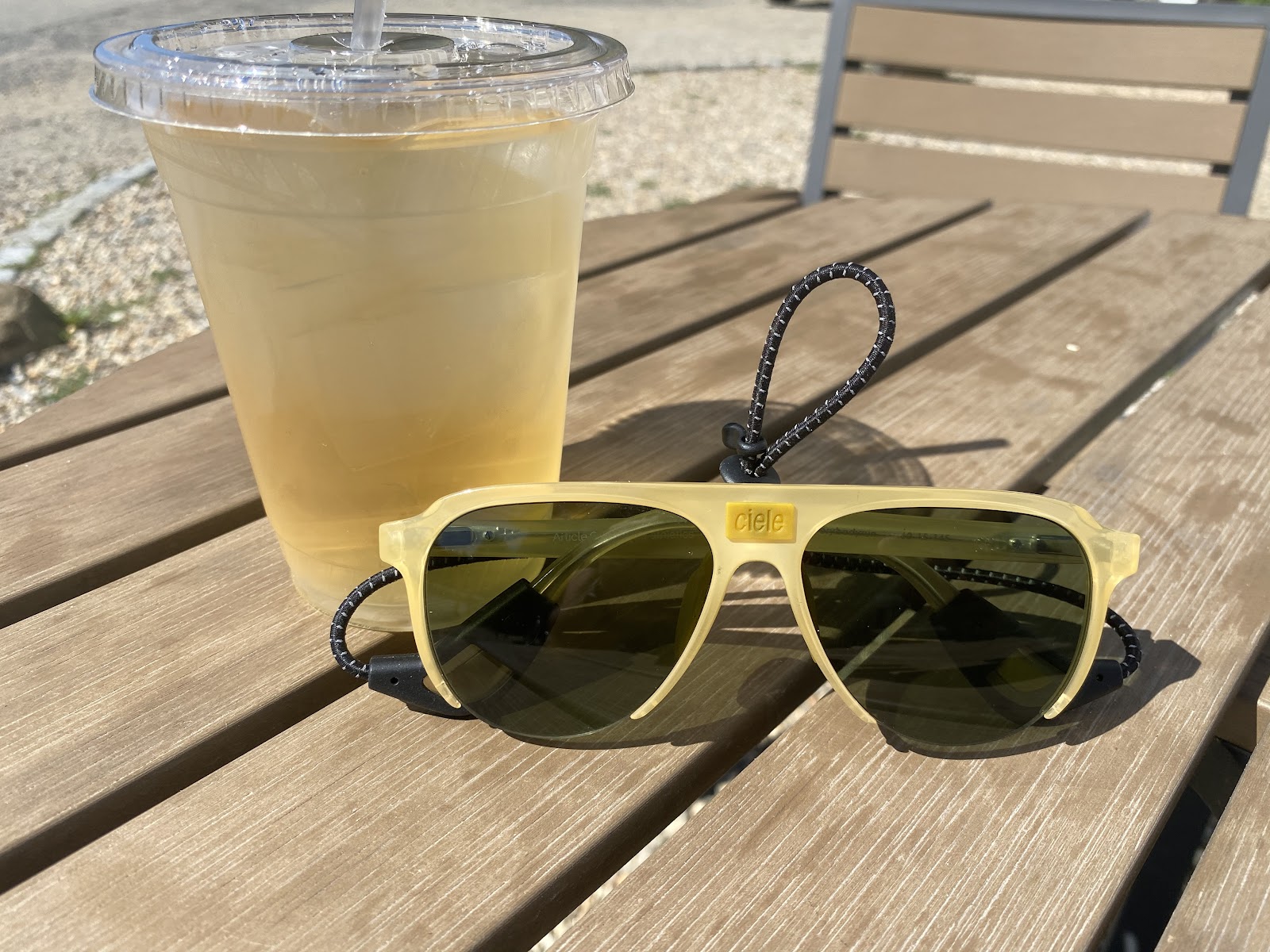 Sam: What do you get when iconic Montreal run cap brand Ciele Athletics gets together with Article One Eyewear designed in Flint, Michigan of all places and hand crafted in small family factories in the Dolomites of Northern Italy?

Both brands value performance and edgy style and the GTGlass we tested clearly seemed to have both. 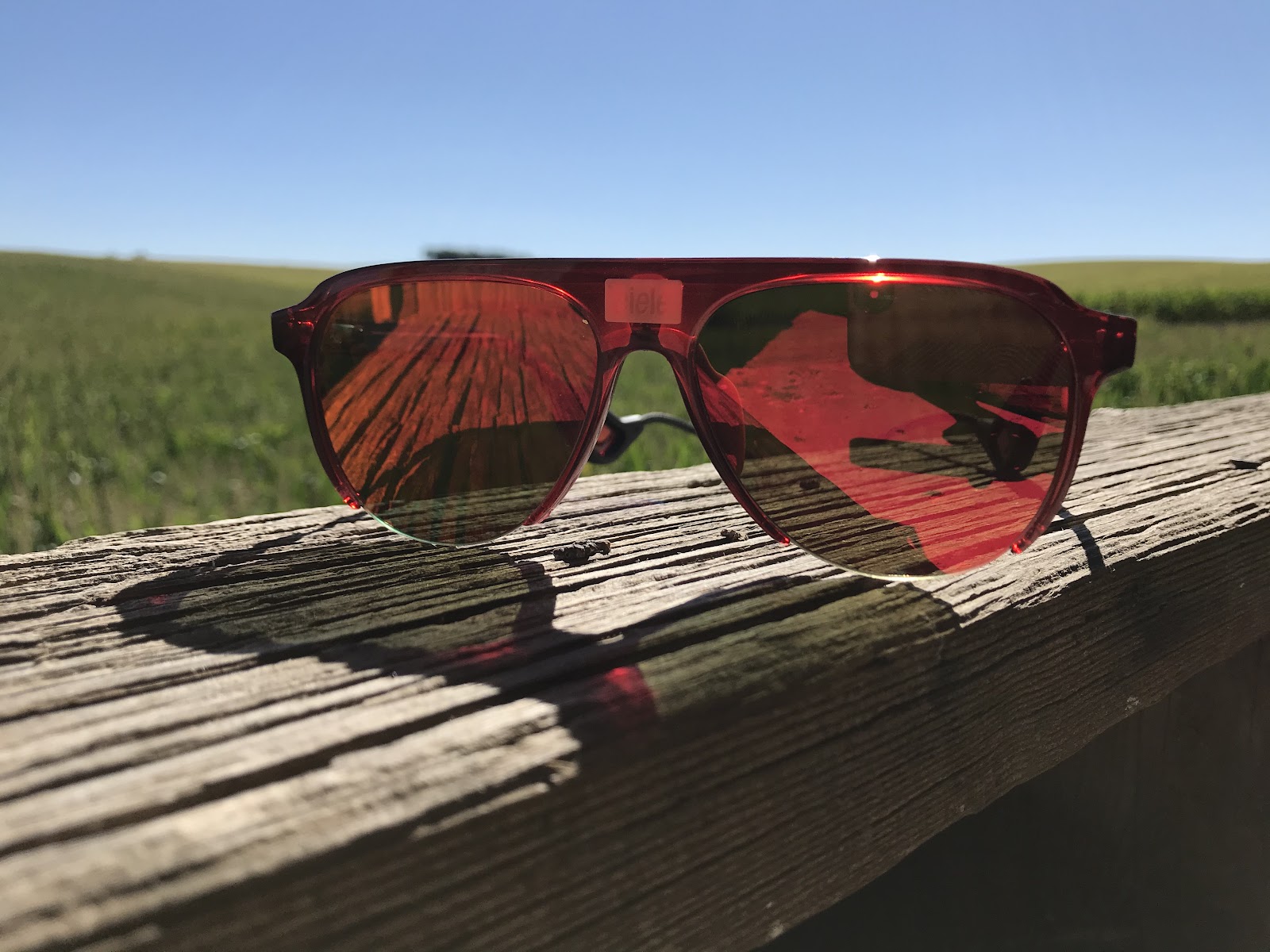 Renee out running the cornfields of Nebraska and Sam and Dominique on the New Hampshire coast and up in the rugged White Mountains set out to find out. As Article One puts it, would “heirloom eyewear become part of our story”? A loaded proposition to say the least!

The GTGlass was inspired by the golden years of running the 70’s and 80’s. Hey, those were my golden years of running in high school and college.  I can well see the styling cues but don’t recognize the functionality, secure fit, and beautiful styling and materials  we have here.  I remember fragile frames, thick lenses, and very loose fits.

My cars were a Plymouth Valiant, a hand me down Pontiac Grand AM, and now we’re getting there, in the early 1980’s a Watkins Glen worthy Ford Escort RS 1600i rally spec production version when I lived in Switzerland. The GTGlass would have been a perfect match! 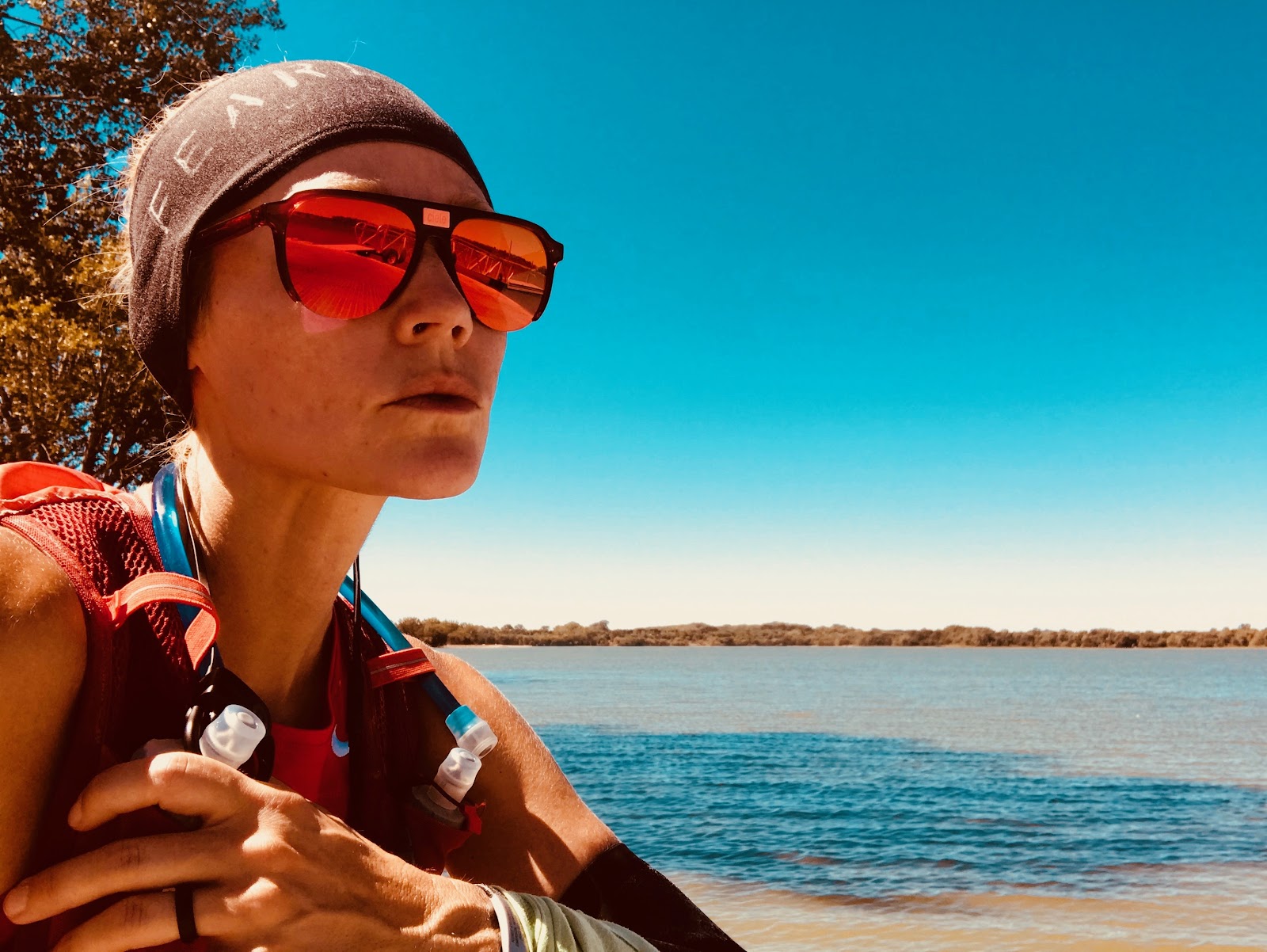 Renee: Do I normally run in $275 sunglasses that are hand-crafted in Italy? No. No, I do not. Although the price tag seems steep for a pair of sunglasses, the GTGlass is more than a casual-day fashion accessory: it is running gear that is durable enough to last forever.

Most runners spend $275 on carbon-plated shoes that will, at best, be wearable for a few hundred miles. And most runners spend several hundred dollars on GPS watches. So, if the price seems steep, remember: it is running gear.

1980s fashion is back. And a few other brands have 80s-ish running sunglasses (Goodr comes to mind). The GTGlass is not simply 80s inspired; these sunglasses are full-on straight from the 70s/80s. They look like how the Guardians of the Galaxy soundtrack sounds. And it is good. 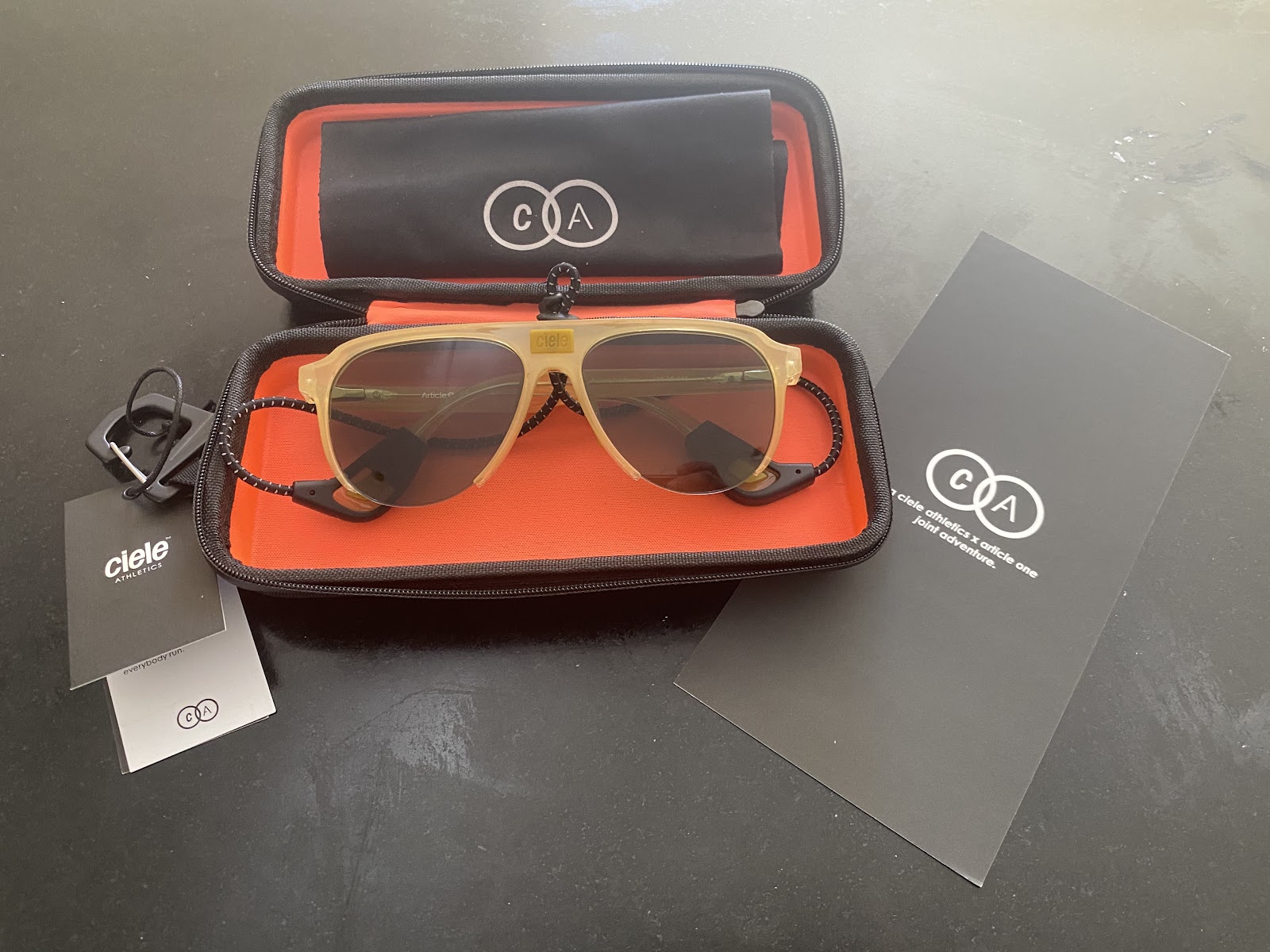 Opening the case with its mini carabiner and seam free zipper I was immediately struck by the translucent cream with a touch of brown frames’ deep and luxurious look set off from the green lenses. My frame color is Watkins Intl., in homage, I think, to the famous car racing track North of New York City where classic sports cars often duel, and while I have no classic sports car I have plenty of fast running shoes, most neon! 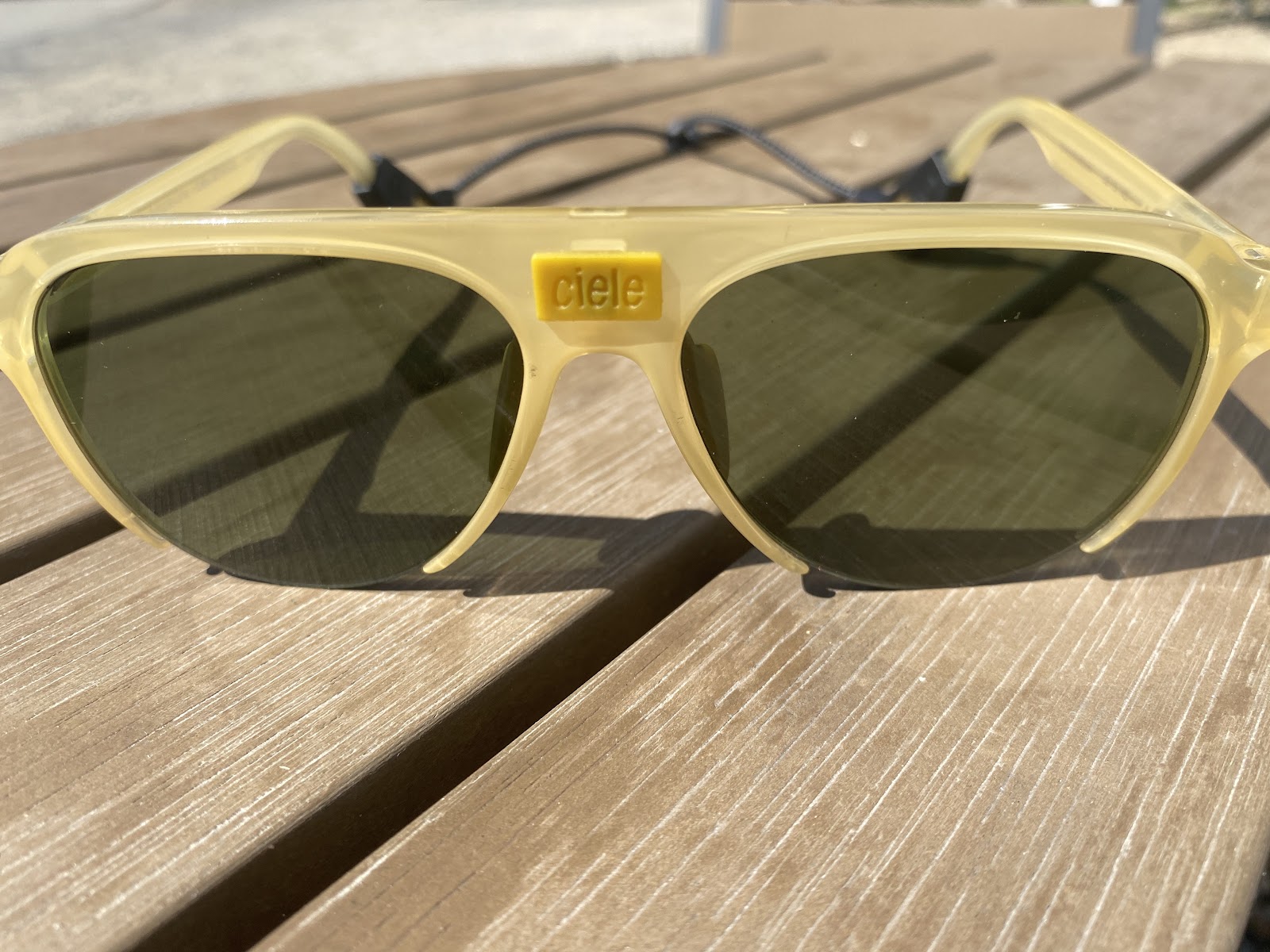 The AO Active frame is a TR90 polymer plastic which is soft, smooth, and with a little bit of friction feel. No hard plastic here.  The frame ends part way across the bottom of the frames. This allows a less impeded view when looking down and is a smart move for running uses. The frame size is: 60 - 15 - 145. 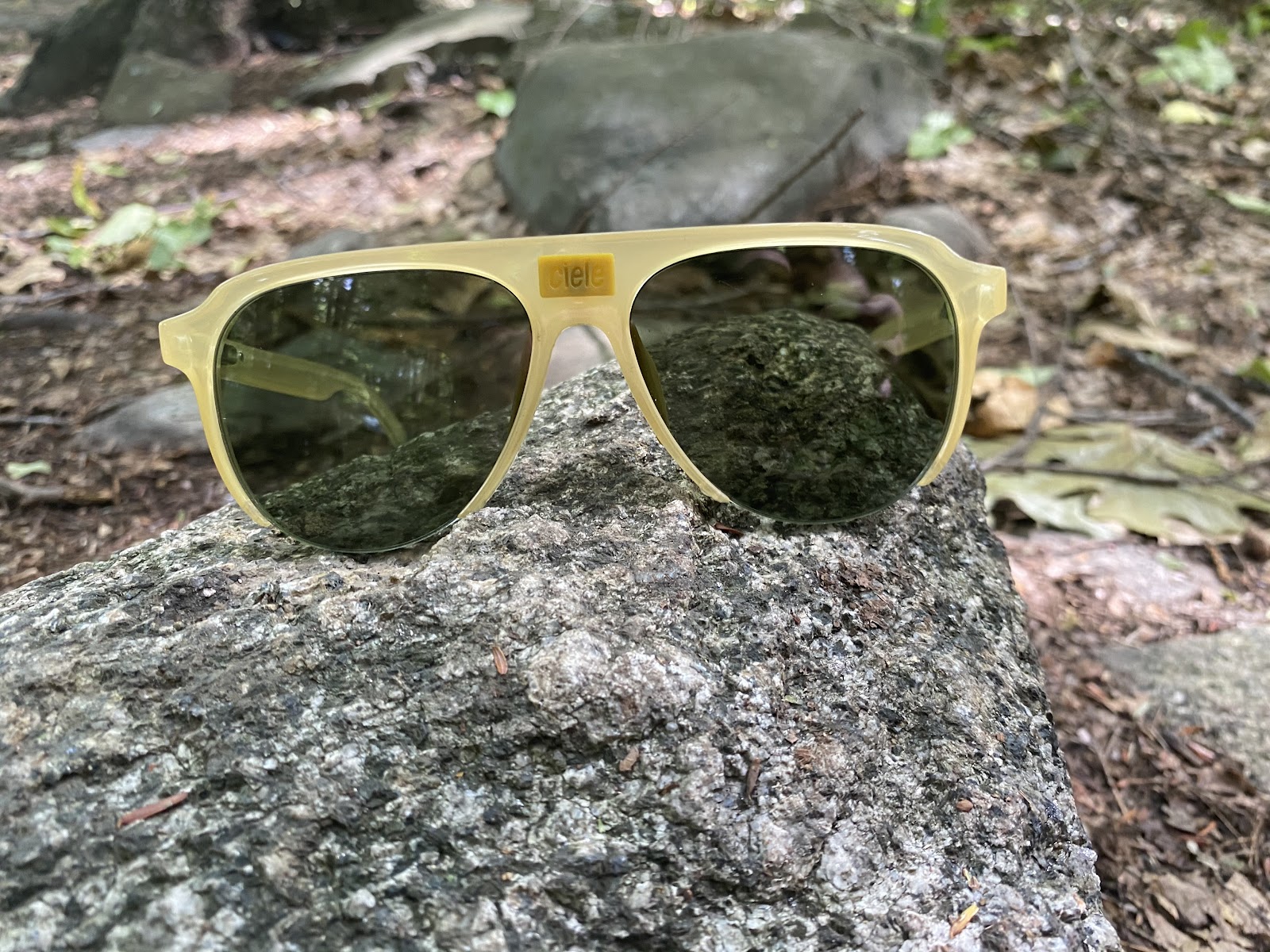 Unfolding them I was impressed by the decisive feel of the spring loaded hinge and the removable sport cord which unlike most was clearly not going to flop, had a small rubber pull and most especially slips over the sides of the broad temples flat completely and very, very securely. In a neat and useful twist the cords’ rubber holders  come off with far more effort than they go on. A good sign! 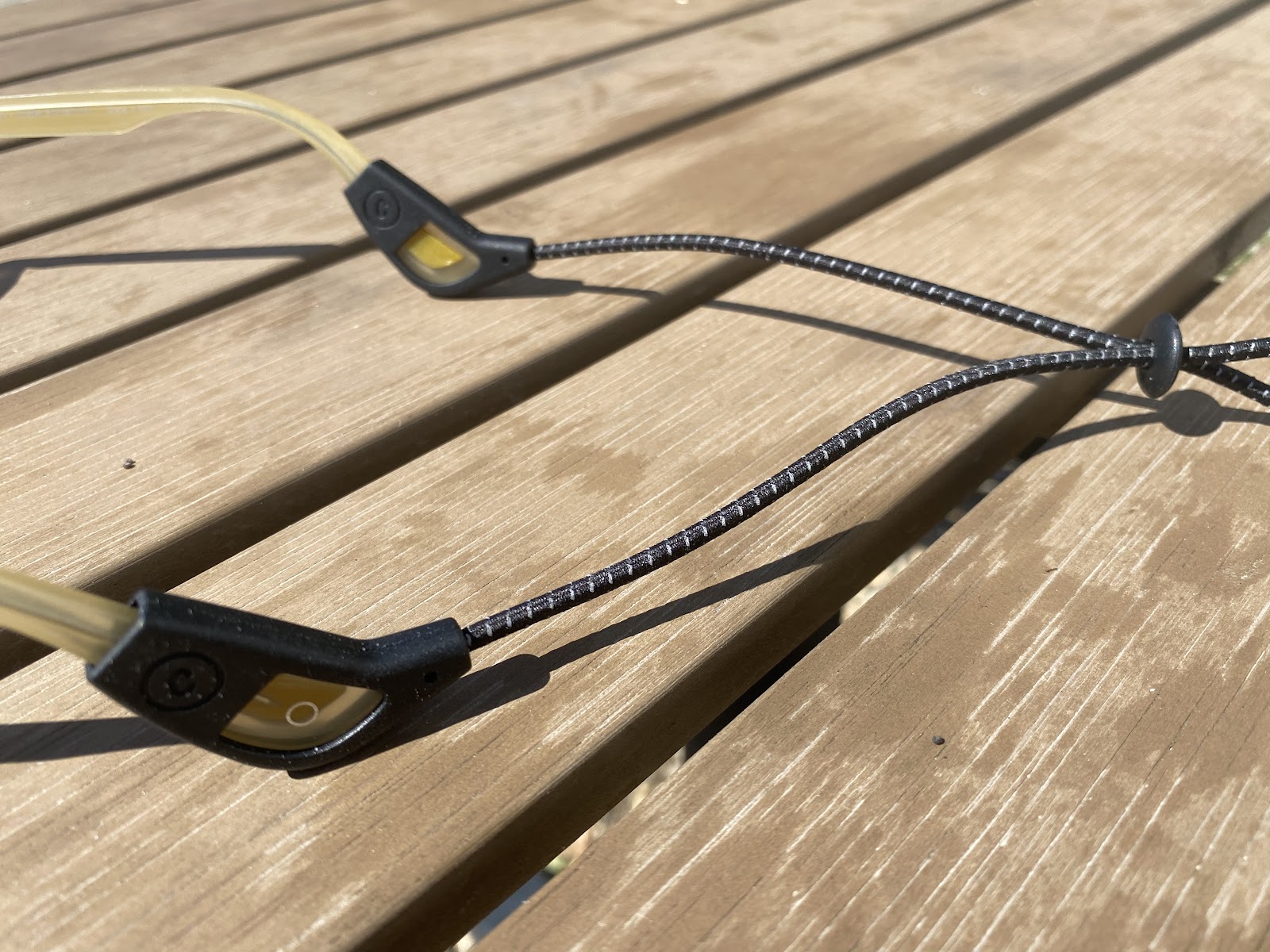 As I sometimes wear sport glasses over my small prescription glasses (shown below) I often struggle with bulky rubber sport cords behind the ears which loosen over time and can pop off. 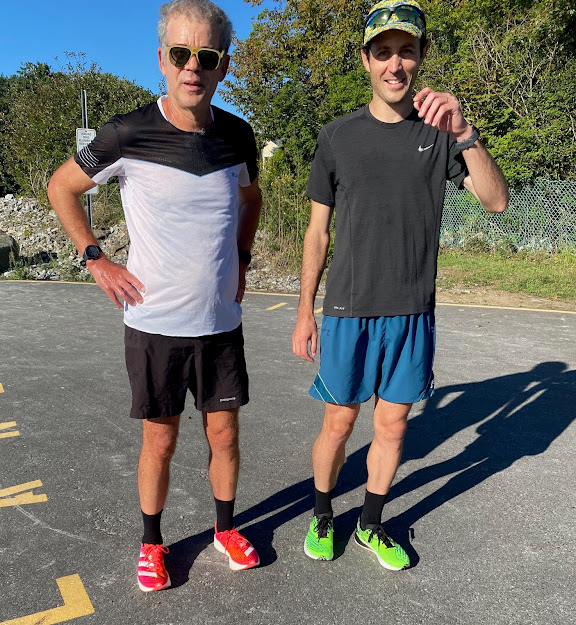 Hiking and on a faster road run they stayed put even over my specs with zero movement, no adjustements or any bounce. The strap and rubber temple pieces are key. The best fit for my weird "use case" of any sport glasses ever! 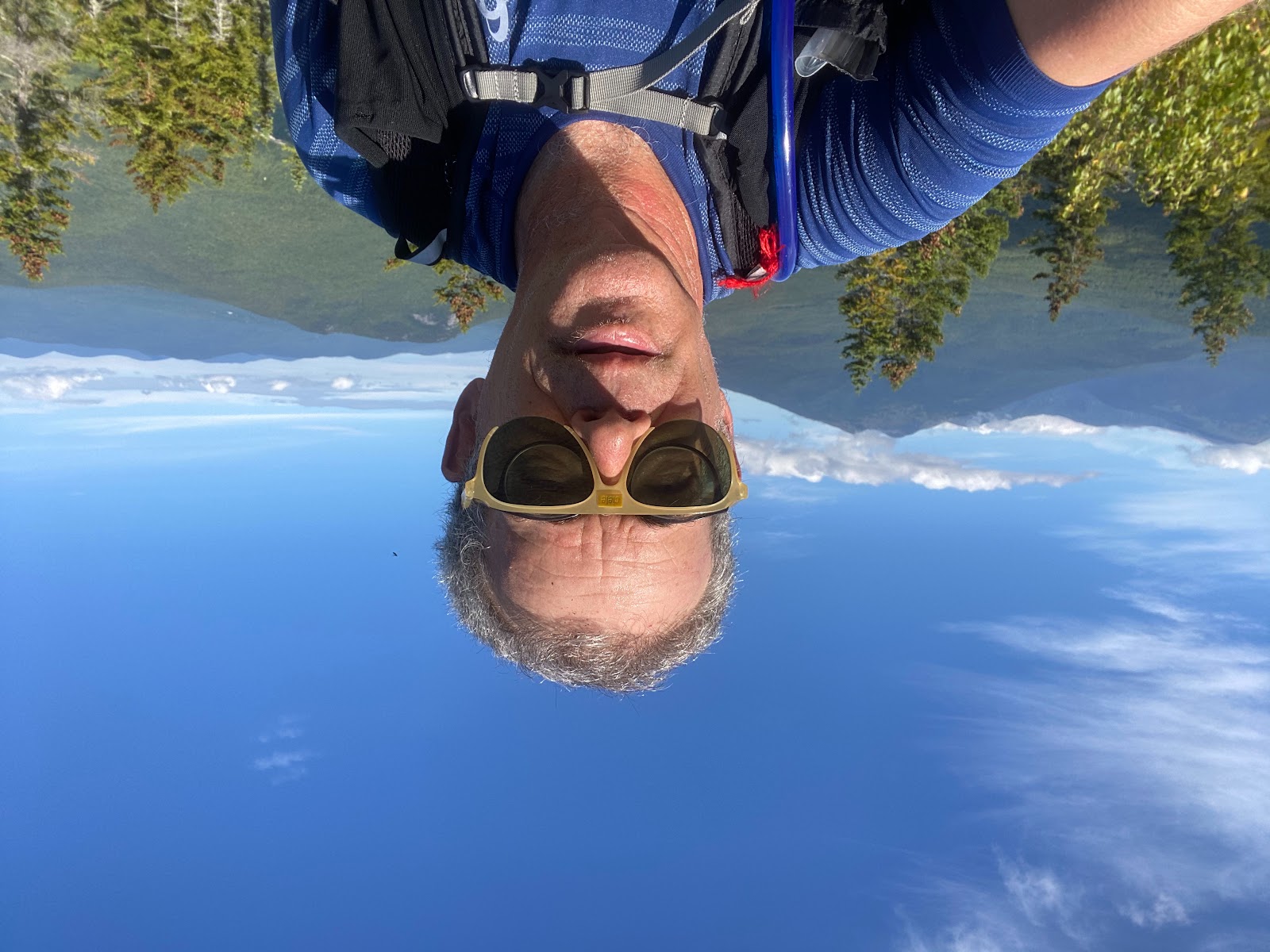 Here not a chance of losing or bouncing. You will not be losing your heirlooms if they get hooked on something. They should stay put! 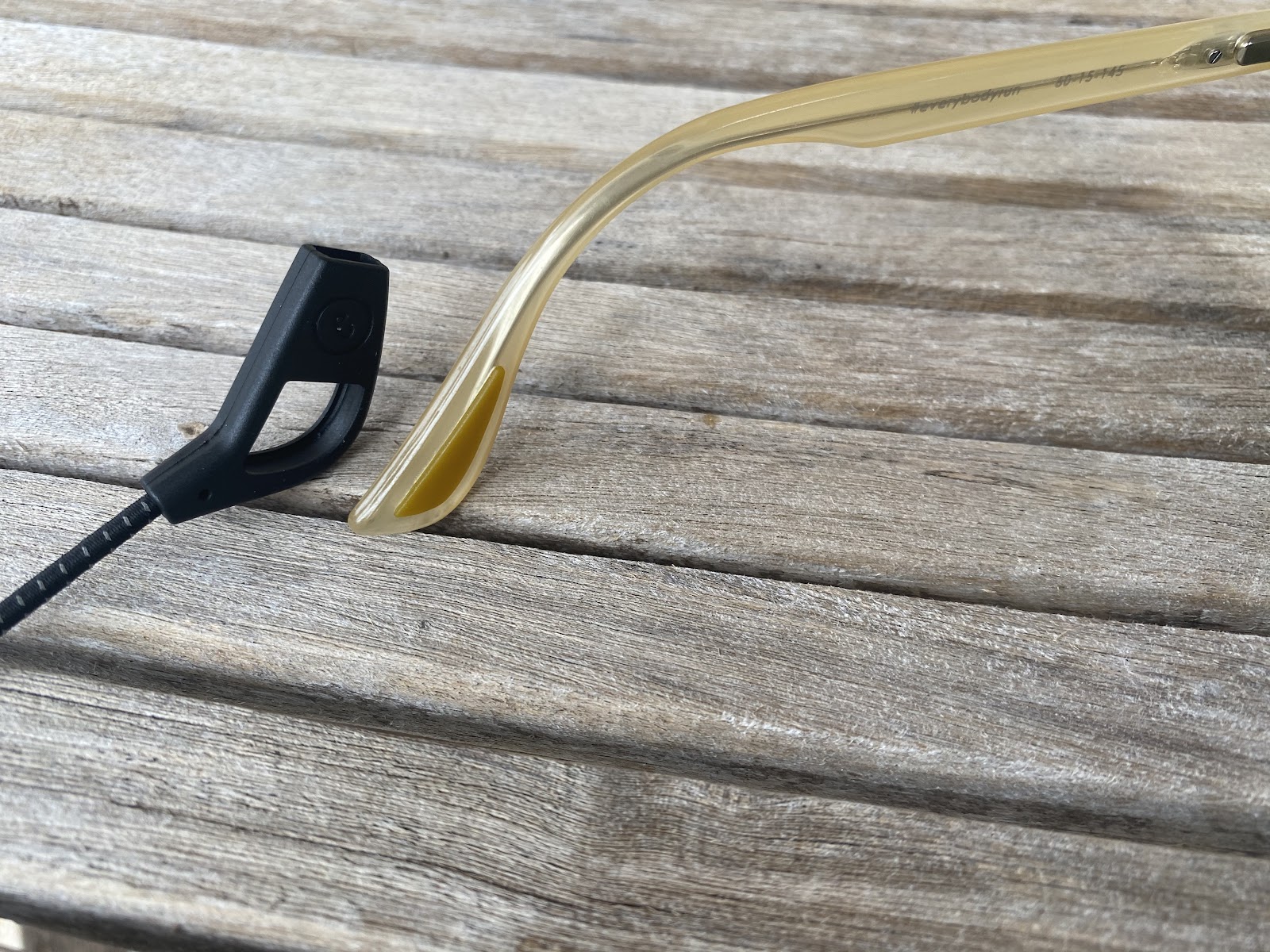 Taking the cords off you have broad temple ends which due to its shape and the silky almost soft nature of the frames stay on equally well and you can easily adjust the nose pieces with their embedded wire core. 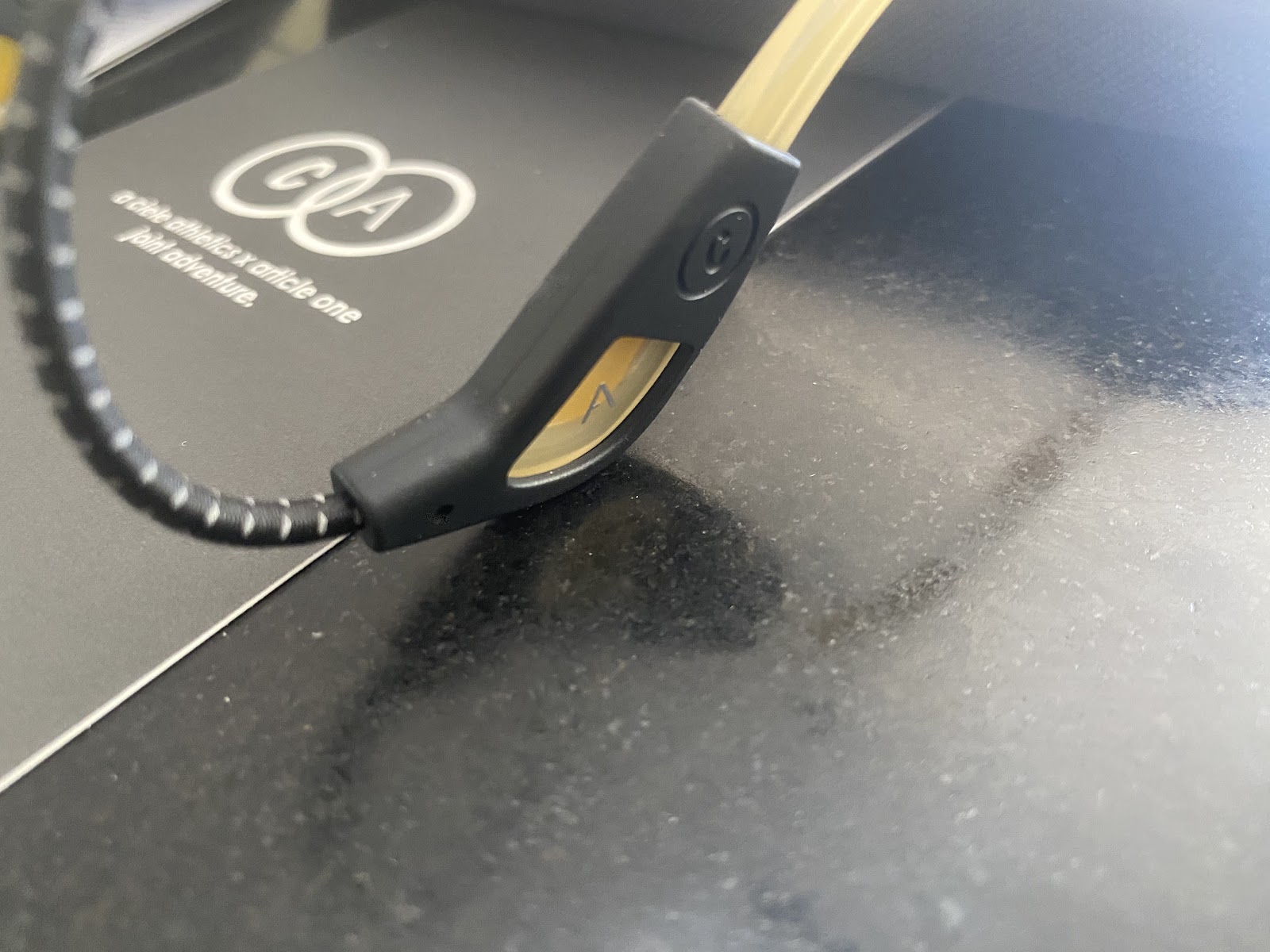 The substantial silicone nose pads are longer than usual, grippy without stick and feature a bendable internal wire core for a custom easy to dial nose grip. 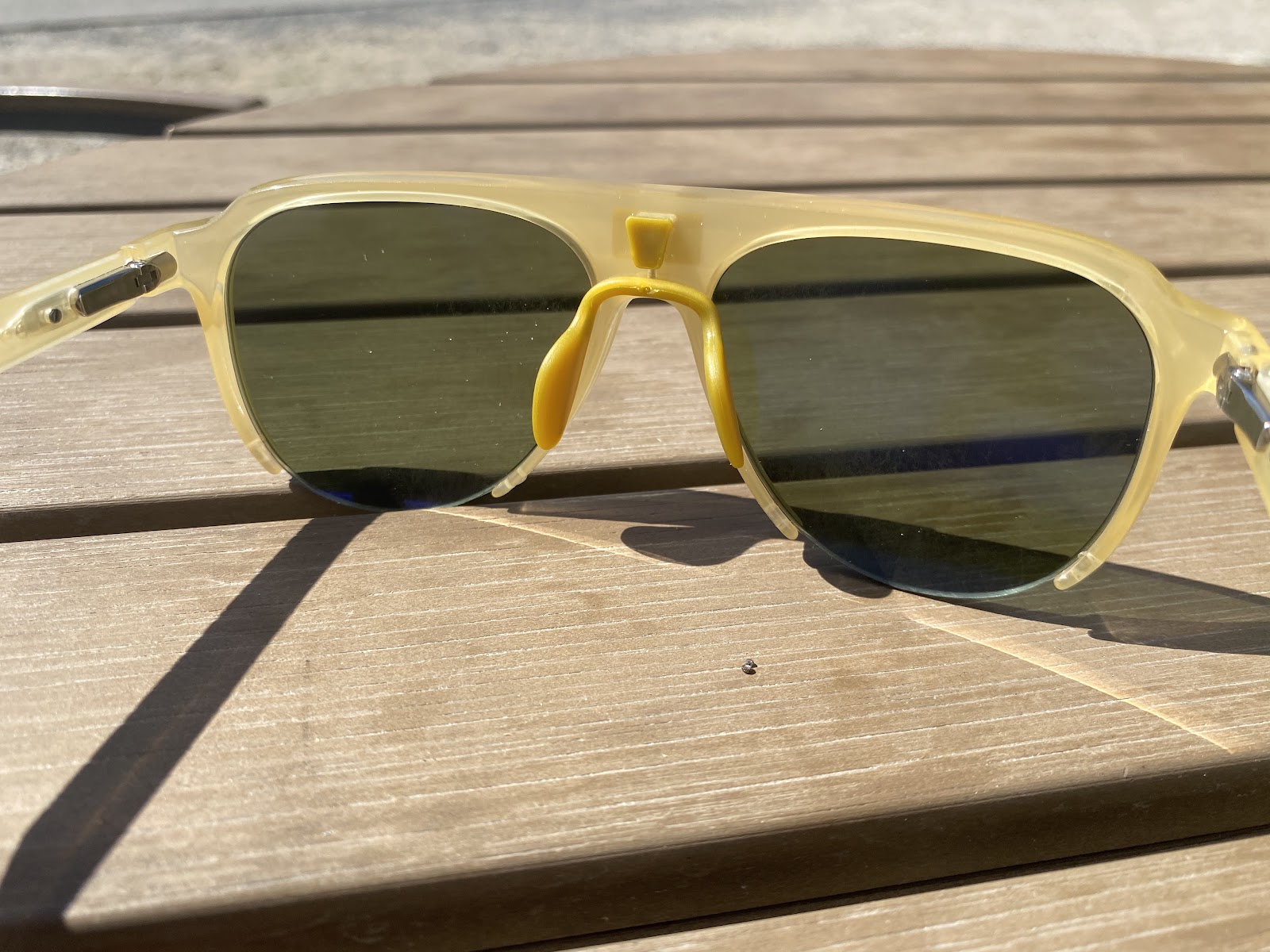 Of course lenses. Here we have an Italian made CR 39 polarized lens by Grivel with 100% UVA/UVB protection plus a backside and front side anti reflective coating. 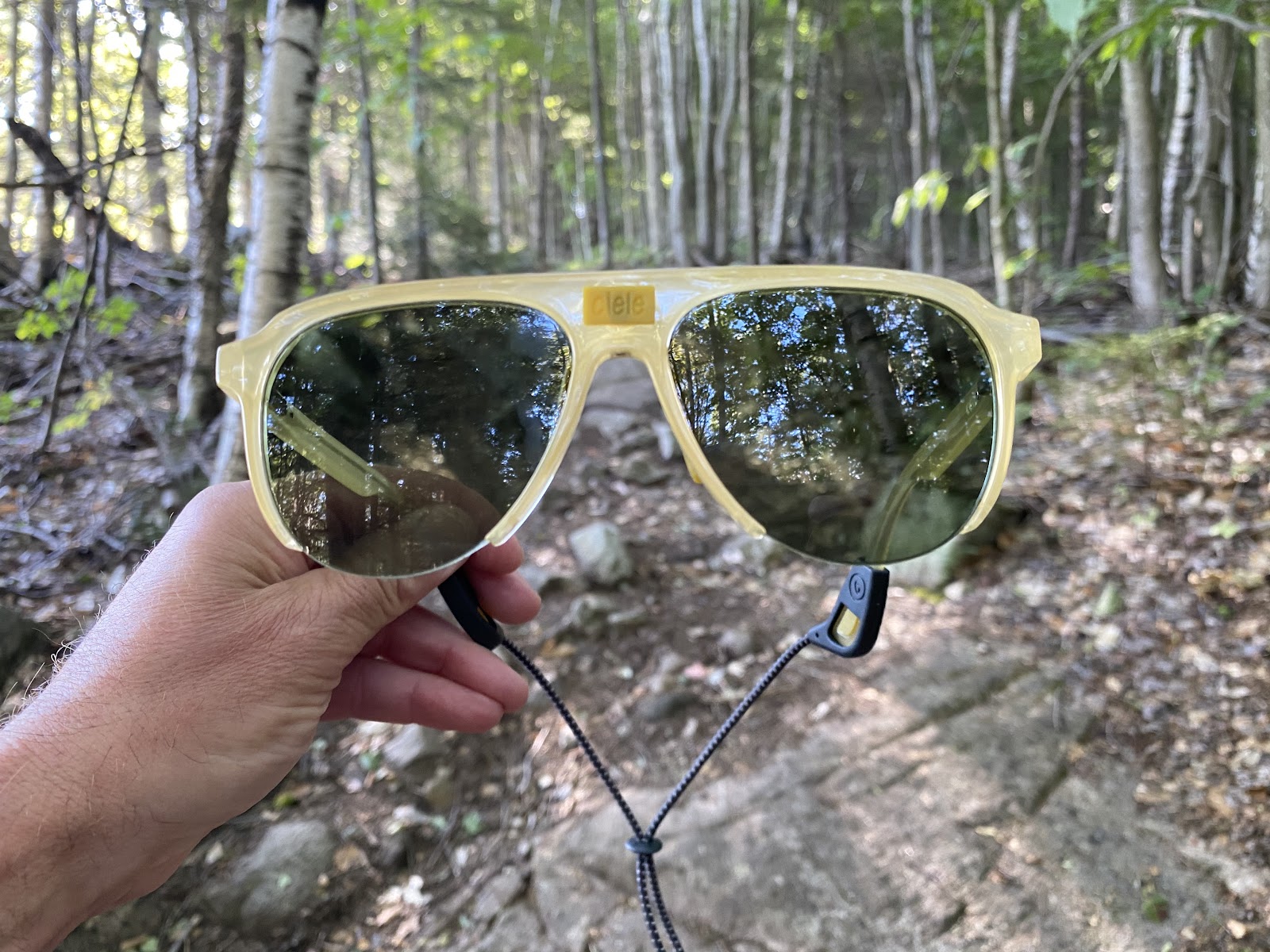 Unlike many polarized lenses, there is no sense of a shiny front face, just smooth deep green. Note that polarized lenses do not work with some electronic displays. While my watch and phone view was fine the heads up display in my car was not visible with them on. 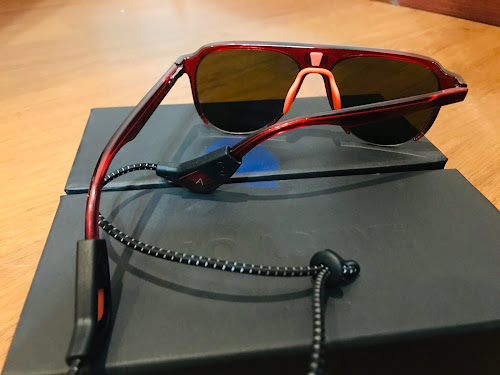 Renee: Sam covered the details very well. These glasses have style, so you better like the 70s/80s vibe because that is what you are getting. I tested the RedRocks color. 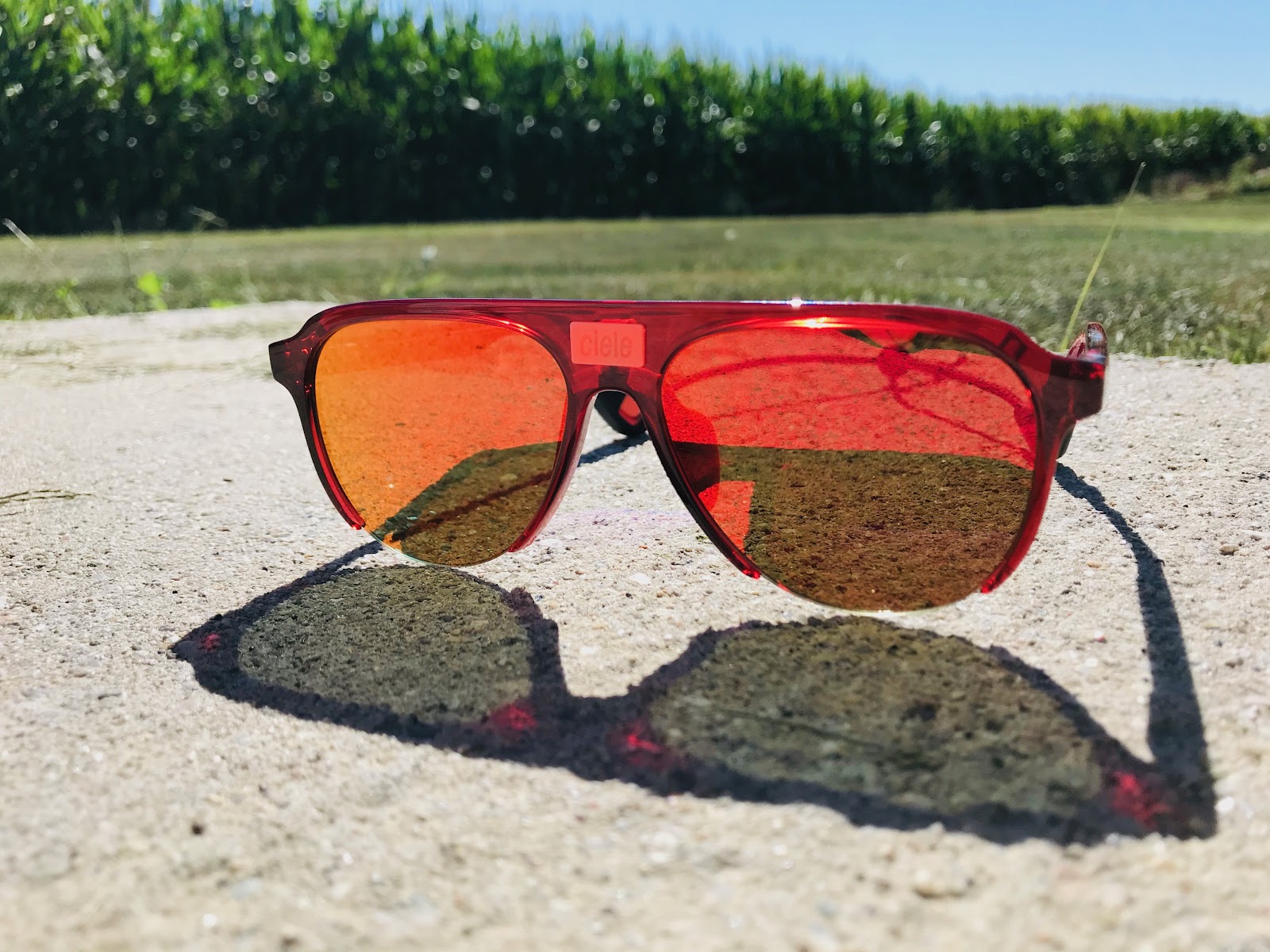 I found myself wondering if I was cool enough to pull off this look. 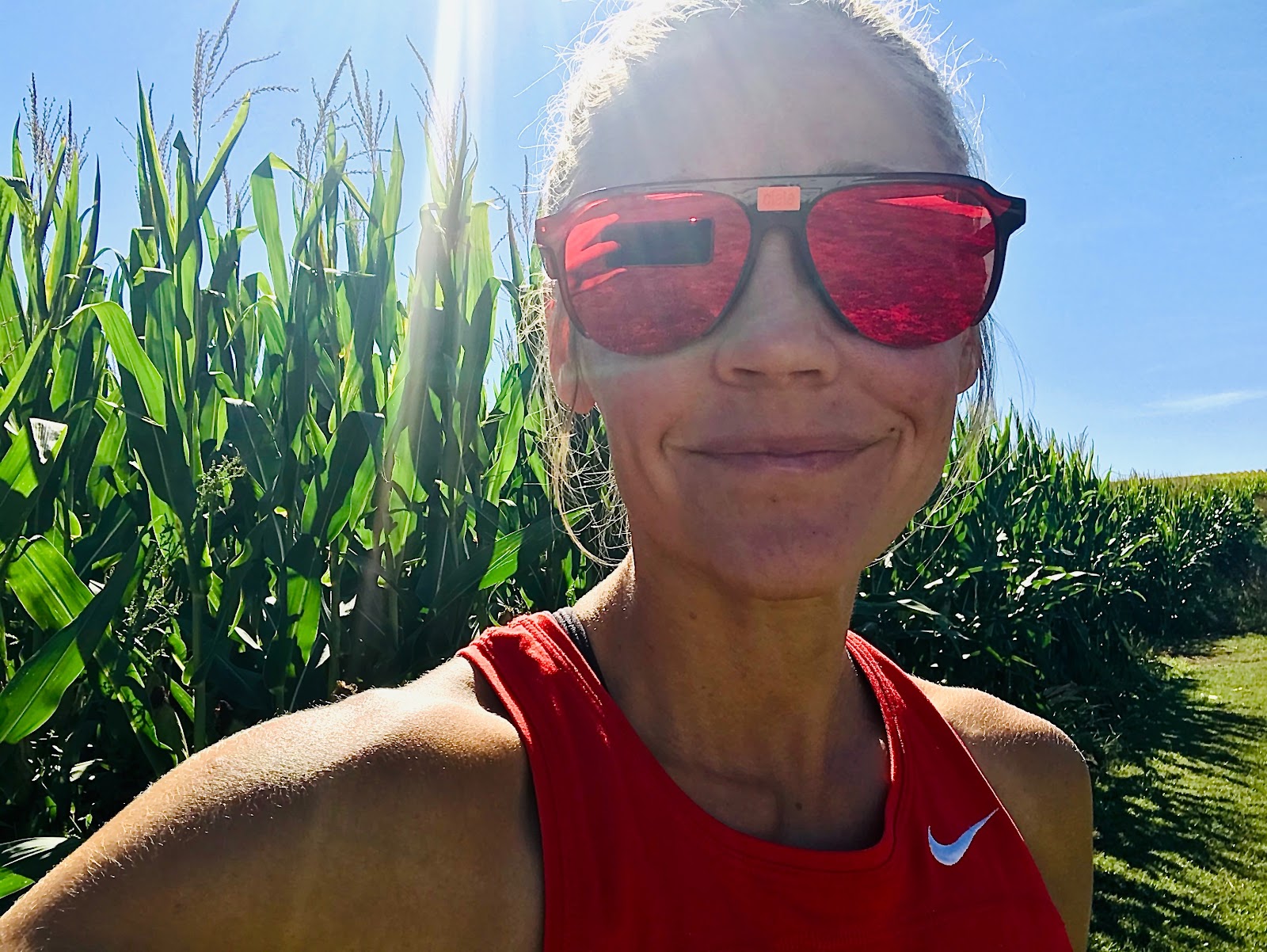 I found them to be a bit too large for my face, but that is not a negative on the fit: it’s just my preference. They are not heavy despite the large frame style. Otherwise, the nose pads were comfortable and unnoticeable while running, which is good. 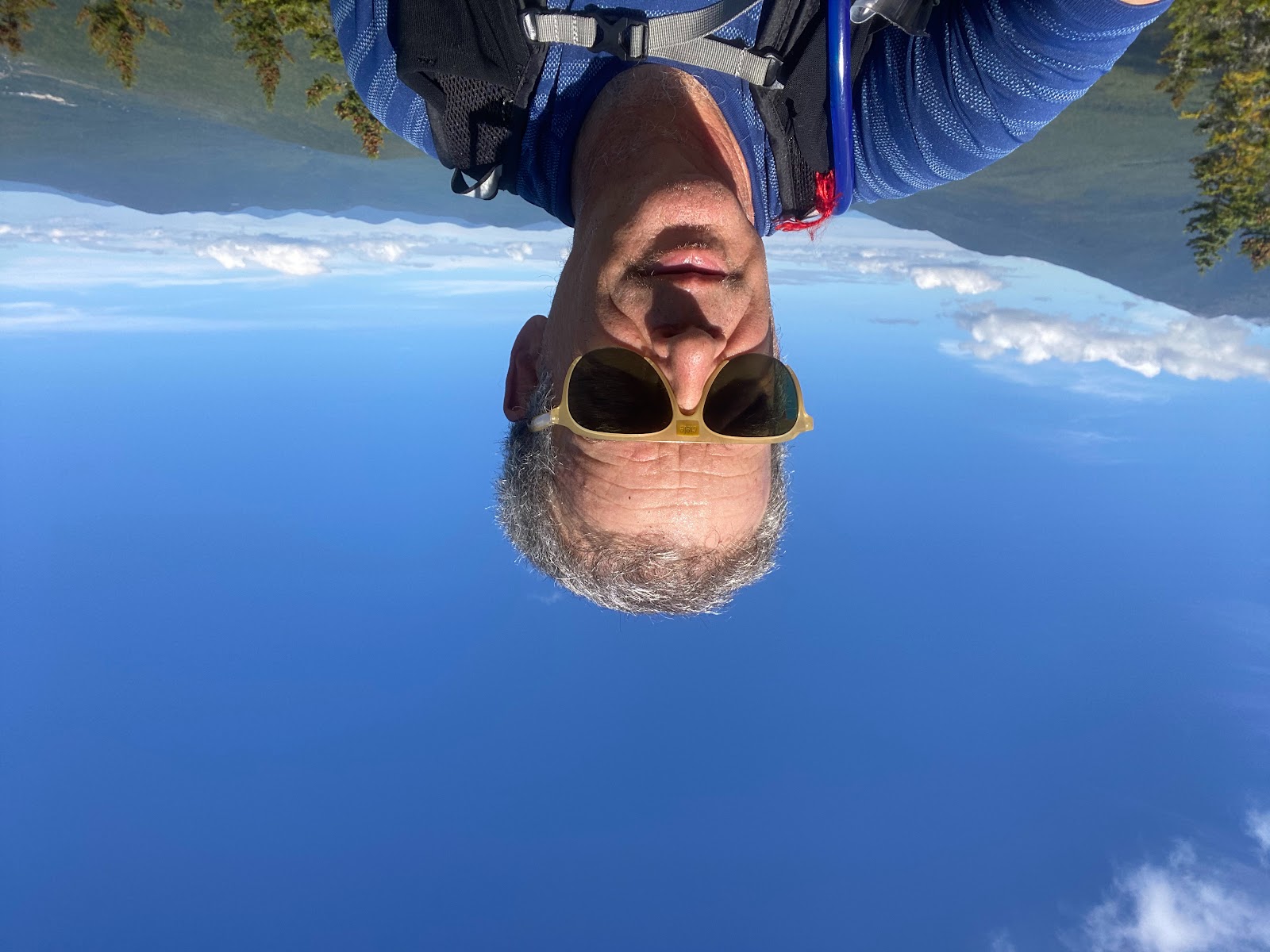 While I have only had the GTGlass a few days I was able to trail run with them, drive many hours to get to a hike in the White Mountains and then used them during the hike. Watkins International.. car racing and such.. I must say that they are fantastic driving sunglasses! 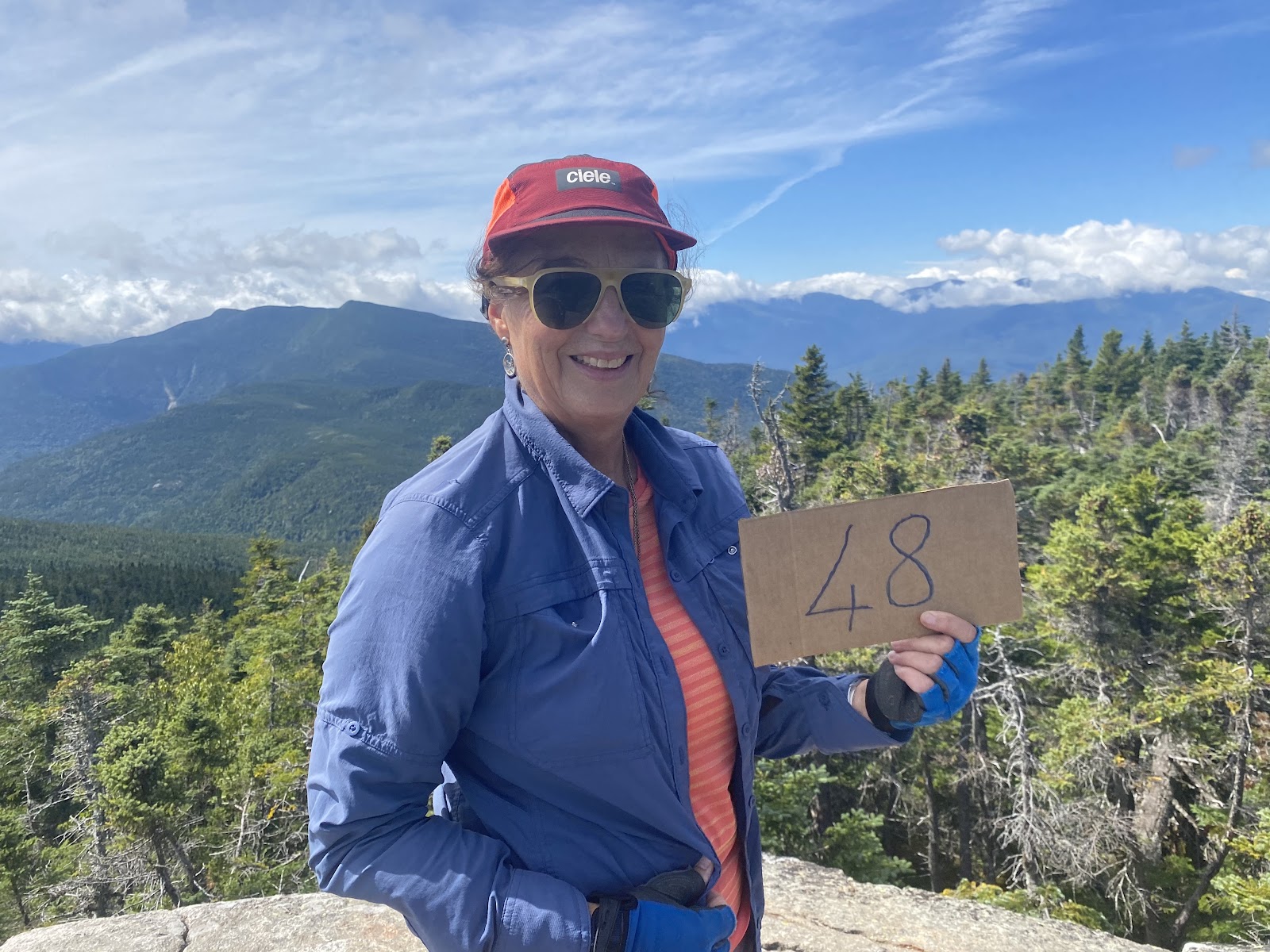 Dominique also tried them on at the summit of Mt Moriah, her 48th and last New Hampshire 4000 footer. She always runs and hikes in her Ciele cap! 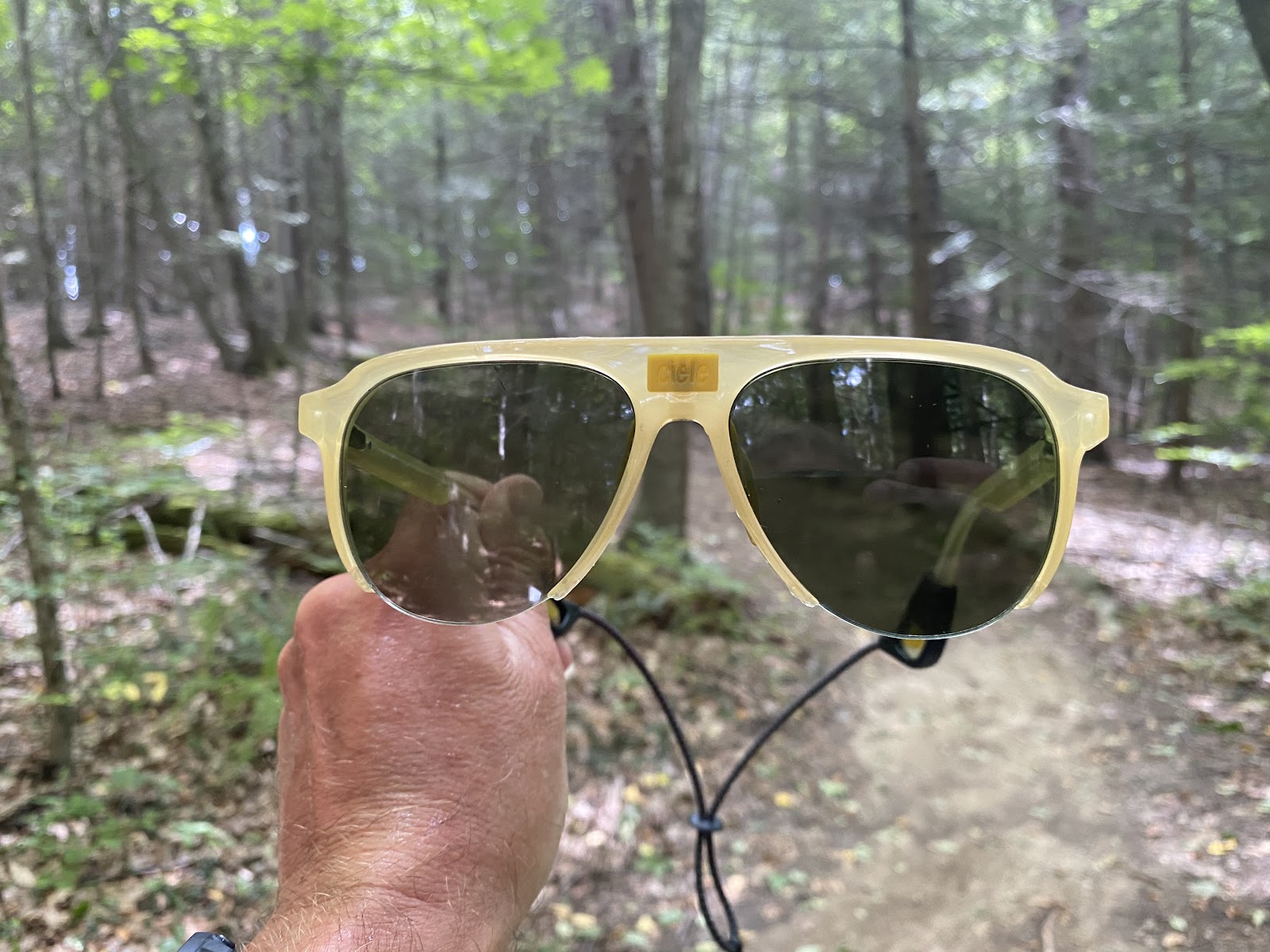 On the run, in part in very dark woods I found them a bit too dark and everything also too green so not as much contrast as say the red lens might give, totally understandable.

For such conditions I prefer a photochromic lens and have a Roka which has served me well. I do think for running versatility the shading could be a bit less dark.

On the flip side of that equation, in the car while driving in sun, photochromic lenses do not “react” or turn light or dark due to the windshield blocking the photochromic reaction so in bright sun photochromic are pretty much useless.

With the GTGlass I drove in all conditions from the beginning and end of day in dim light and in very bright light and they were fantastic. Not as deeply dark as my Revo polarized but with a broader range of useful hours.

Out in the sun on the run and hiking the clarity of vision is outstanding. Sharp without overdoing it, a mellow and fairly natural view of the world on the other side of the lens. 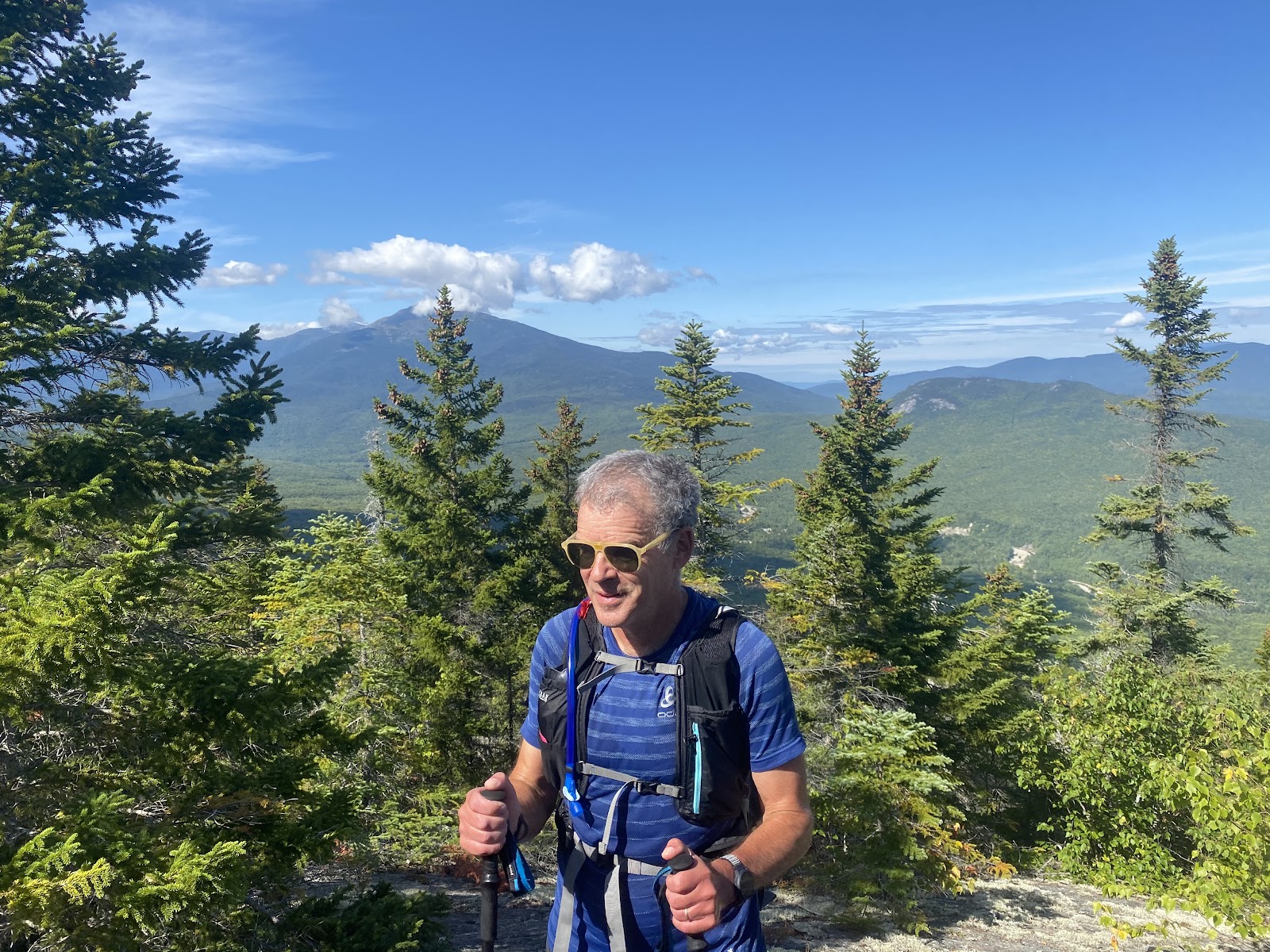 During our hike we were doing quite a bit of slab clambering on steep slopes and never with them on or up on my head, with cord in place, was I was worried they would fall off or even easily get knocked off by branches and such. A first for me with any glasses. The stiffer cord and the sliding rubber ring kept them put, and good.

Renee: My first run wearing the GTGlass was a 50k in full sun in 90 degree Fahrenheit weather. I have gone through four pairs of $25-$35 sunglasses recently and have turned to wearing a visor to keep the sun out of my eyes. I actually did not think I would go back to sunglasses because I found they make me sleepy while running. 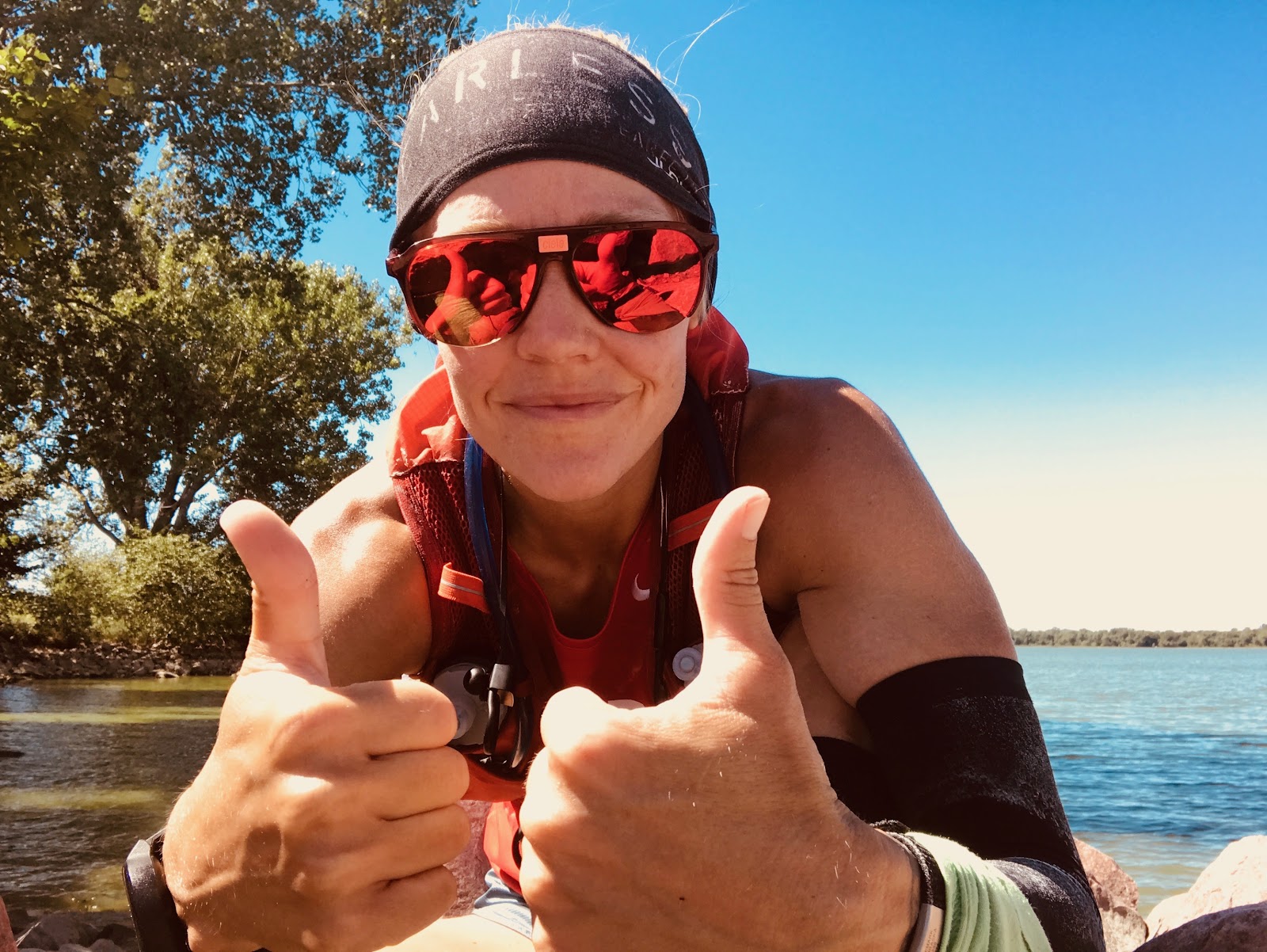 The GTGlass performs very well. I almost forgot I was wearing sunglasses the entire 50k run (I said ALMOST). I wore them with the cord and noticed zero movement and zero discomfort.  I had very little shade during this long run, so I had no issues with them being too dark like Sam did. That said, if I’m running in thick trees on a trail, I will not wear sunglasses, regardless. My only negative forthe GTGlass is I could see a reflection on the far outside of both lenses. Perhaps this occurs because the frames are too large for my face? A few times during my 50k run, I thought someone was running up behind me because of this reflection. 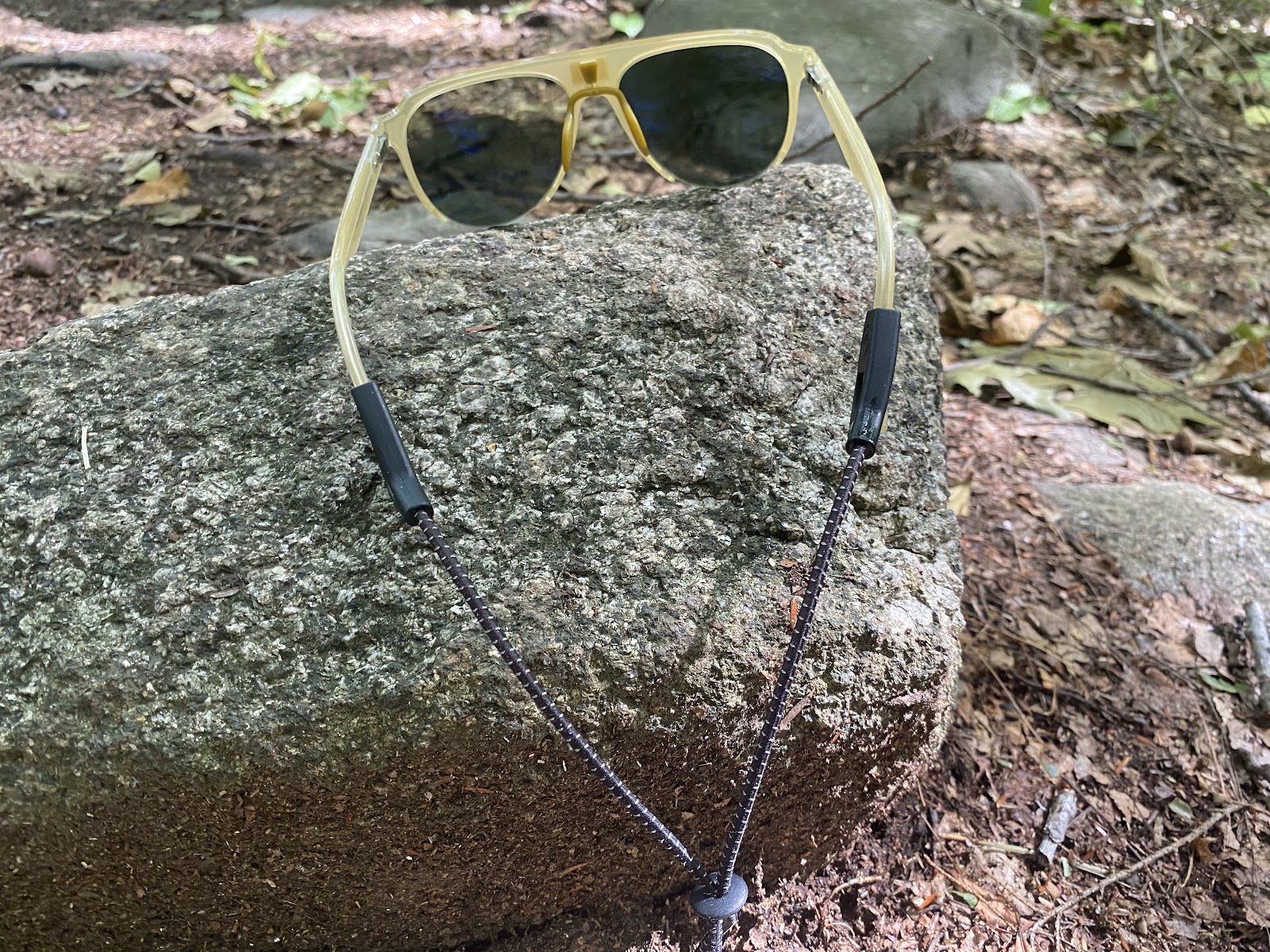 Sam: In need of an outstanding run, sport, and everyday ”heirloom” set of shades with some edgy and I would say also luxurious styling and with carefully considered and beautifully implemented sport features from fit, to lenses, to adjustable nose piece to the integrated but removable cord?

The GTGlass could be for you. They just feel, wear, and look the part in a special way. The styling and especially frame color is edgy but not overdone and exaggerated as “fashion” glasses can be. I don't see them going out of style anytime soon. 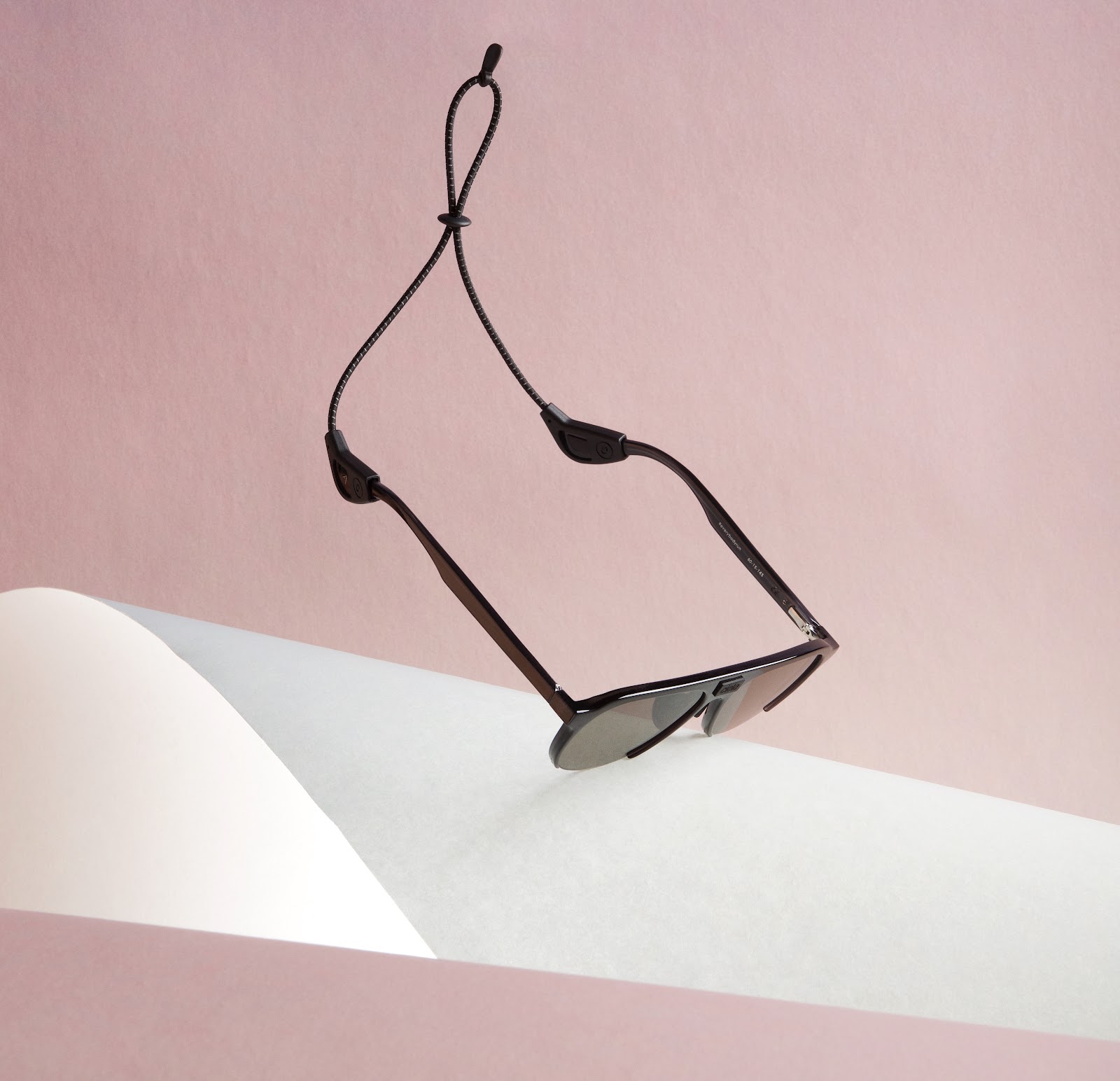 At $275 they are up in the stratosphere as far as pricing but they look, feel, fit and perform as they are priced, quite beyond anything I have tested or used in a running sunglasses and I have tested several at close to their price range, most more aggressively sport oriented in looks with less everyday use styling, even for me.  They were a special treat to test and for sure also jazzed up my looks, or so I was told!

Renee: Yes, $275. I know. I know. If you think about the GTGlass as a piece of running gear that lasts for years and years, the price is not bad (we all spend several hundred dollars on less durable gear, such as shoes and watches).

The style is distinctive with a very 70s/80s vibe. Not just a hint of these decades, a full-on flashback. I think the GTGlass is for runners who like the finer quality gear instead of the status quo (and runners who do not mind the price).

The price and quality are very noticeable ihere. You get what you pay for, in my opinion, which is a long-lasting, well performing, uniquely styled piece of gear. My only hesitation in purchasing the GTGlass would be whether I’m cool enough to wear them!  Also, as I wrote earlier, I could see a reflection on the far edge of both lenses. Otherwise, I loved running in them.

Available from Article One Eyewear and Ciele Athletics