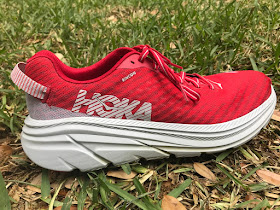 The Hoka One One Rincon have come along at a perfect time for me. Due to a recent foot injury (plantar plate tear=ouch), I have been instructed to wear shoes with little to no flex in them. The logical result of that prescription is that I have been running in various Hoka models over the past couple of months as they are the only shoes (except for the skechers Razor 3) that don't seem to hurt my feet.

That said, I've been frustrated with the Hokas I've been running in. I'm on the lighter side of things (around 145) and while my feet don't hurt when I run in the Bondi I also don't really enjoy running when I run in the Bondi. It's a lot of shoe and it feels like a chore for me to push them (especially after 10 or so miles or up hills). I picked up some Cliftons (Clifton 5) which were better, but still left me feeling kind of uninspired. While the Cliftons are a lighter than the Bondi, they still don't thrill me. I figured that I'd run in Cliftons until healed and then ditch them. 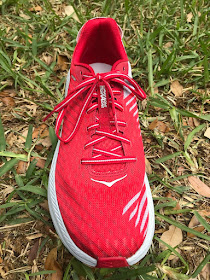 So along comes the Rincon. Ahhh, what a relief. These puppies are light (7.7 oz is the quoted weight--which puts them almost 2 ounces lighter than the Clifton), comfortable and a joy to run in. I've always wanted to really enjoy a Hoka--and have never been able to really enjoy any of their shoes (even when it got close there were fit or blister issues). That's all changed
with the Rincon.   This is an initial thoughts review, so I'm only 2 runs into the Rincon, but so far so good. 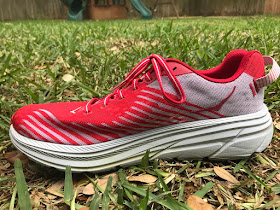 A great, engineered mesh upper that holds the foot really well, is ultra breathable and has no hot spots or blister issues. Toe box is roomy without being ridiculous. There's a great big tab on the back for putting them on or even hanging them from a carabiner on your bag. 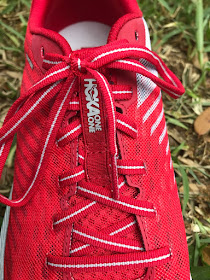 Lacing is simple and direct. These are going to be a great summer shoe. 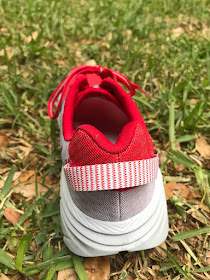 Midsole:
According to Hoka this is a more dense and slightly firmer midsole. It feels great. There's a really good amount of cushion (it actually feels pretty soft--in a good way) and plenty of energy return. For me they're a little softer than the Clifton 5 but also return more energy. 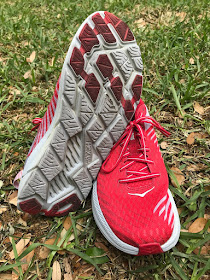 This is the only potential trouble spot on the Rincon so far. There are sections of blown rubber and a lot of exposed outsole. I'm not so worried about the exposed material as I expect that to show wear, but after only about 14 miles there's some wear on the blown rubber that seems like a potential problem. I'll keep an eye on it, but there's a little more wear than I'd like to see early on.

Ride:
Oh. So. Smooth. The Rincon is in a really sweet spot for me. It's soft without being mushy, protective without being clunky and light without being insubstantial. It feels really good at any speed and I'd easily use it for long runs, a daily trainer and tempo days. The only thing I'm not sure about is real speed. I haven't tried a true speed workout in them yet, but they may be just a tiny bit soft to be able to get turnover as high as you might with a firmer shoe. I'll report back after some more runs. 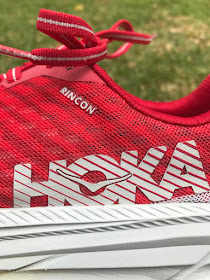 Conclusion:  By far my favorite Hoka to date, this will be a great shoe for lots of different runners. I'm eager to put it back to back against the Skechers Razor 3 and a couple of other shoes for comparison. It's a great ride with a very comfortable upper and looks terrific too. 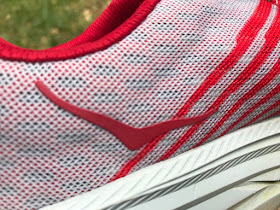 Jeff Beck
After one seven mile run in the Hoka One One Rincon, I'm more impressed with this shoe than just about anything else I've put on my feet in the last twelve months. It feels like the midsole is the absolute perfect level of fast cushioning. My feet don't feel like I ran anything at all, and since today was supposed to be an easy run I spent most of the time trying to slow things down. The shoe doesn't quite have the same spring feeling the Vaporfly does, but the closest comparison would be the Skechers Razor 3 Hyper - only more cushioned, and a little faster turnover. 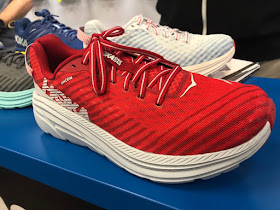 I'm always skeptical of Hoka toe boxes, even with their recent Challenger 5 and Stinson 5 releases that brought forward human foot shaped shoes. The Rincon isn't massive up front, but it is big enough, and the upper is stretchy enough to give that little bit more.

Early in today's run I thought the Rincon would likely be a great half marathon shoe, but not much more, but now I think it could be an ideal marathon shoe. I'm looking forward to running more in this shoe, and getting a better feel for it. We'll see how it holds up to speed work and a couple long runs, but my initial take away is that Hoka has an absolute monster on it hands.

I know there are a lot of Clifton, or early version of the Clifton, comparisons, but I don't see that at all. I ran in the first Clifton at release, and was largely underwhelmed by an oddly fitting shoe that was very lightweight with a nice plush cushioning, but it didn't result in a great running shoe for me. The Rincon isn't nearly as soft, and the shape of the sole makes this an ideal uptempo daily trainer. 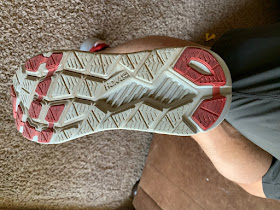 There is a lot of exposed midsole instead of outsole, and it will be interesting to see how it hold up. Seven miles in and there's already noticeable wear in multiple places, but it could be similar to the Epic React where the first 25 miles had lots of wear, and then it slowed down after that. Not a concern yet, just something to keep in mind.

Watch our YouTube initial Comparison of Rincon vs. Clifton 6 below

Read reviewers' full run bios here
The product reviewed was provided at no cost. The opinions herein are entirely the authors'.
Comments and Questions
Welcome Below!
Please Like and Follow RoadTrailRun
Facebook: RoadTrailRun.com  Instagram: @roadtrailrun
Twitter: @RoadTrailRun You Tube: @RoadTrailRun
RoadTrailRun receives a commission for purchases at the stores below.
Your purchases help support RoadTrailRun. Thanks!
SHOP AMAZON FOR HOKA ONE ONE HERE