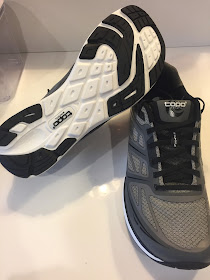 For those just following along, Topo was started by Tony Post, formerly of Vibram. The first Topo shoes had a split toe and they've been inching towards more traditional running shoes. Their toe boxes are anatomical and roomy to allow toe splay. This is going to be a short  review--read on to find out why... 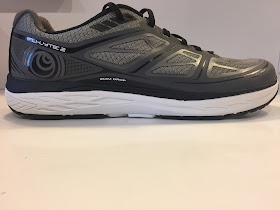 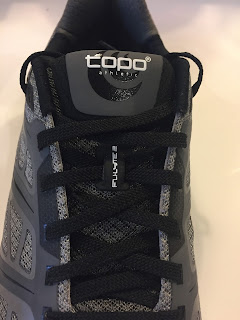 The upper is made of a very light mesh with a fair amount of overlay. They hug the feet nicely and the foot is held well. They're not the most exciting looking shoe out there, but they're not ugly.
The big issue I have with the Fly-Lyte is the material at the base of the tongue. The first pair I received had a relatively huge flap of fabric hanging over the spot where the tongue is sewn onto the upper. Topo were kind enough to send another pair, and while they were slightly better, there's still a big friction spot where the tongue is sewn on. 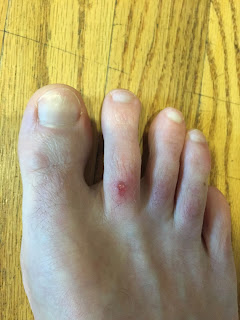 It protrudes onto my toes and causes blistering on both feet. I don't think it's a manufacturing error--I think it's a design flaw. For me it makes the shoe a non-starter. I just can't run in them because it hurts too much. If you try them and don't have a friction point there, they're a nice shoe. it's a shame because other than that I really like the ride of the shoe.
Editor's Note: I checked a pair in my local running store and felt the same very large flap. Far larger than for other shoes and brands I checked. 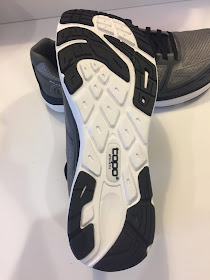 The midsole is full-length EVA foam at a nearly ideal level of firmness and cushion. Topo says it is slightly softer and more flexible The outsole is very decent full-length rubber.


Ride
The Fly-Lyte 2 rides really well. it's a really nice transition from landing to toe off, a good balance of firmness and cushion and largely disappears on the foot as the miles tick by.

Conclusion
Unfortunately, I can't run in the Topo Fly-Lyte 2 because it digs holes into the tops of my toes. I wish this wasn't an issue because I generally like the ride and the feel of the shoe. I'm hoping the next version of the shoe corrects this issue.


Comparisons
Fly-Lyte vs. Skechers GoRun 5
The Fly-Lyte is a bit firmer than the GoRun, but has some of the same 'lace-em up and go' elements. Of course the GoRun doesn't dig a hole in my foot, so...
Fly-Lyte vs. Altra Escalante
The Fly-Lyte is more shoe, a bit firmer and probably more protective for longer miles. Again, if you don't run into the tongue issue, it's a great option.

For over 60 of in depth 2017 shoe and gear reviews visit our index page here
We have reviews for the excellent Topo MT-2, Terraventure and Ultrafly which did not have tongue defects at the index page.

My running career got off to a slow start…in high school I was told I ran like a race walker and was thus relegated to race walking on the track team. I got back into running about 15 years ago and then into triathlon. Triathlon really rekindled my love for running, so about two years ago I hired a coach and really focused on the half and full marathons.  I broke a bad habit of putting in tons of moderately hard miles (and no easy or hard ones) and after plateauing at 3:25 (with some disastrous marathons in there), this past year I brought my marathon under 3:00 and my half under 1:25. Along the way I’ve developed a bit of a shoe problem.

Comments and Questions Welcome Below!

Topo is available from the stores below