Editor's Note: We are thrilled to have Dominick Layfield the 2017 winner of the Spine Challenger in the UK and California's Quicksilver 100K review the Lone Peak 3.5. 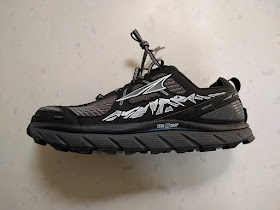 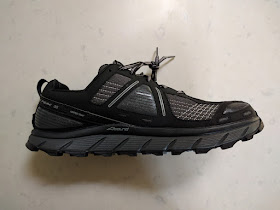 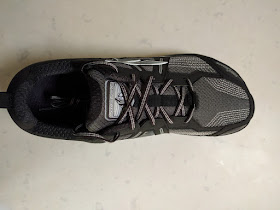 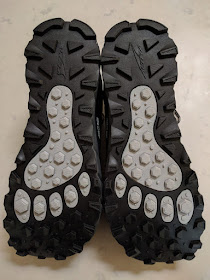 Background
Almost exactly at this time last year, I received a pre-release pair of Lone Peak 3.0 to evaluate, a few days before the Quicksilver 100k.  I tried them on, went for a short test-run, and decided they were good enough to race in.

At Quicksilver, they performed -- for the most part -- excellently.  The one hiccup occurred late in the race: as the day progressed and warmed up, it became very hot.  I filled up my soft-flasks and repeatedly doused myself with water to cool off.  Water trickled down my body and soaked my shoes.  Then on the steep final descents (the course is veritable yo-yo) I found that the insoles started to slide around inside the shoe, eventually flapping out the side at the finish line.

I'd owned Altra shoes previously, but though I enjoyed them for training, I'd always found the upper fit was too loose to make them a viable choice for racing.  The LP3 was the first Altra I wanted to race in, and I embraced them wholeheartedly.

Since Quicksilver, I wore LP3's again and again, both in training and for long races.  I wore them at Scout Mountain Ultra Trail, at Speedgoat, at Angeles Crest, at the Spine Challenger, at Sean O'Brien, and most recently at Georgia Death Race.

I find it hard to put my finger exactly on what makes the LP3 so great.  They don't stand out from the pack in any one area.  They are not the lightest, or the most stable, or the most cushioned.  Mostly, it's a shoe that gets everything about right.  I know I can rely on them.  I know that if I wear the LP3 I will have zero foot issues.  I know I can run over any terrain, no matter how rocky and harsh, and not want more foot protection.  I know that they are stable enough that I won't twist my ankle.

Neither am I the only one.  I've seen a ton of these shoes at recent trail races.

It's worth noting, however, that a lot of people are underwhelmed by the Lone Peak for a variety of reasons. In their RTR review of the LP3, both Sam and Jeff found the shoe lacking in some way.  Sam commented on "a feeling of instability at the rear of the shoe" which he attributed to a low heel collar, while Jeff found that "heel hold is excellent".  Jeff commented that "on technical downhills ... my feet were slopping around some inside the shoe", while Sam felt that "everything in the front of the shoe back to the end of the laces is impeccable with great hold".

Issues with the Lone Peak 3.0

Despite the fact that I reach for the LP3's again and again, the shoe has numerous small flaws.

1.  Insole slippage.  As described above, the LP3 insole slides around when wet.  I experienced this at a couple of races, crossing the finish line with the insole sticking improbably half out of the shoe.  However, this was a quick and easy fix.  A dab of Krazy glue (cyanoacrilate) under the forefoot, and the problem went away.

2.  Feels hot. Without actually going for a hot run with different shoes on each foot, this is somewhat subjective.  But I think the LP3 feels a little hotter and less breathable than other shoes I run in regularly.

3.  Doesn't drain well.  Many ultras involve unavoidable water crossings.  (Not to mention self-administered water dousing.)  I'm used to squishing along in wet shoes for a while afterwards.  However, the LP3 always seems to take an unusually long time to dry out afterwards.

5.  Initial length quirks.  When I first tried on the LP3, they felt a little short.  I could feel my big toe brushing against the front of the toe box.  This never evolved into a real problem, and after a single run, the shoe had stretched/broken-in enough that I never thought about it again.   I mention it mostly because Jeff observed the same initial fit issue in his RTR review, and because this may have deterred a lot of potential LP3 customers.

6.  Localized durability issue.  My first pair of LP3 were pre-launch samples, so when the upper started to wear through on the inside of the toe crease, I was inclined to think this might be an early manufacturing hiccup that would be fixed in full production.  But my second pair are also starting to deteriorate in the exact same location.  This is particularly annoying as everything else about the shoe seems bulletproof and built to last a long time.
Changes with Lone Peak 3.5

Despite my quibbles enumerated above, there was not much wrong with the Lone Peak 3.0.  Unsurprisingly with the 3.5 update, Altra don't seem to have changed much, and that is a good thing.

1. The most obvious change is to the upper fabric.  The mesh used in the LP3 is replaced with a softer-feeling stretchier material.  The new stretchy fabric is reinforced with some contrasting stitching that (presumably) is there to limit or tailor the stretch in certain areas.

2. Location of overlays has been tweaked, most notably in the forefoot, around the toe crease.  The toe-box reinforcements have been moved further away from the crease, an area of high mechanical strain.  I'm hopeful that this modification, coupled with the change to a stretchier fabric, will solve the premature wear issue that I experienced with the LP 3.0.
3. A number of small holes have been added to the overlay around the periphery of the upper.  I assume this is to help the shoe drain better when soaked.
4. A second overlay has been added, forming a sling around the heel.  This may be partly to reinforce the heel collar, which Sam found a little loose and insecure in the LP3.  (I should note that I had no issues with the LP3 heel, so clearly this is subjective.)   More obviously, however, the new overlay includes a couple of unstitched areas on each side into which a gaiter can hook.   I like this idea: Inov-8 use a similar system to secure their gaiters, and I've found it works well, to prevent ingress of snow and mud around the side of the shoe.  The previous gaiter retention points are carried over unchanged from LP3: velcro tab on heel, metal loop at front of lacing area.

Nothing much else has changed.  I had hoped Altra might ditch the conspicuous abstract mountain print on the side.  But no.  I guess this is a signature look of the shoe now.
Weight

I had hoped that the 3.5 revision might trim a little weight, but current indications are that it is pretty much the same or very slightly heavier than before.  I can't give a definitive answer because the sample I received of the 3.5 is size 10.5, and I'm comparing these to a pair of LP3's in size 10.0.  The larger pair of LP3.5 weighed 656 g, which I estimate puts 1/2 size smaller around 622g.  My old pair of LP3's weigh 618g with a little rubber worn off, and a good amount of dirt stuck to them.

And How Does It Run?

Short answer: the LP3.5 feels almost exactly like the LP3.0.

It has the same creamy, "roll over anything" compliant underfoot feel.  The upper has same overall shape as before: if you found that the LP3 was the wrong shape for your foot, chances are you will feel the same about the 3.5.  If you liked the LP3, you'll probably like the 3.5 even more.

A few devotees of the Lone Peak 2.5 complained that the toe box had become narrower in the LP3.  The slight stretchiness of the LP3.5 upper may make it more tolerable to this group, but don't expect a big difference.

I'm a size 10 US, and found the LP3.0 (once broken in) fit true to size .  Unfortunately Altra didn't have any size 10.0 Lone Peak 3.5 available from their limited pre-release stock, so they sent a pair of size 10.5 for evaluation.  Consequently, my observations about the fit and performance of the upper are compromised.  I did notice the new stretchiness.  Otherwise everything felt familiar and comfortable.

While the roominess of the 1/2 size up is fine for gentle training runs when the terrain is not too steep, my foot doesn't feel secure enough in the shoe that I'm willing to risk racing in it.

The elephant in the room is the new Speedgoat 2 from Hoka (RTR review here).  The old Speedgoat was not very popular, and something of a niche shoe.  The SG2 is significantly improved, and should see a much wider audience.  Personally, I don't much like the shape of Hoka shoes, finding them narrow in the forefoot with poor mid-foot retention.  But if you have a Hoka-friendly foot, then the SG2 is a very strong contender for ultra-distance trail running, and comes in about an ounce lighter than Lone Peak 3.5.

Dominick Layfield's Run Bio
Dominick Layfield lives in Southern California after several years in Park City, UT.  He is an avid trail runner who likes to race.  He holds a PhD in biomedical engineering from MIT, and has worked as a researcher in orthopedic biomechanics. So he knows the difference between a ligament and tendon :-).
In 2016, he raced, among others, the Angeles Crest 100 (2nd place), Scout Mountain 80K (1st place), and Georgia Death Race 68 miler (3rd place).  His 2017 achievement include first place in the dead of winter 2017 108-mile Spine  Challenger race in the UK, breaking the course record by an hour and first place in the Quicksilver 100K in California. He will be running both the Western States 100 and UTMB in 2017.

The Lone Peak was provided at no charge. The opinions herein are entirely the author's.
Photo Credit: Dom Layfield

Comments and Questions Welcome Below!