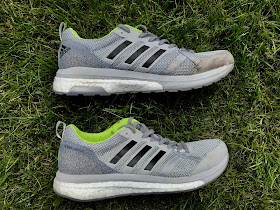 The Tempo 9 is a performance trainer with underfoot support features focused on stabilizing the foot from mid foot to forefoot. I would call the Tempo a "serious shoe" for fast comfortable well supported training. I did not run in the Tempo 8 but have the Boston 6, adios Boost 3, and Energy Boost (4), review soon.

The Tempo 9 is not a traditional posted pronation support shoe where the focus is on stabilizing the foot in the early part of the gait with most commonly a firm "post" of foam on the medial side nearer the heel.  I absolutely can't stand traditional stability shoes with such a construction. Tempo on the other hand represents a great blend of features for any runner who seeks  protection, a touch of forefoot stability, and responsive cushioning for their uptempo running or daily training. It reminds me a lot of the excellent Altra Impulse with similar mid to forefoot stability features and my 2015 shoe of the year, review here. 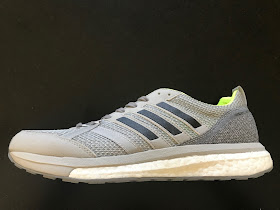 Looking at the lateral side above everything looks much like a neutral shoe.
Neutral runners, and I am one, should not be scared away from the Tempo if you seek a stable fore to mid foot platform and a more responsive and stable ride than say the Boston. The main stability action is over on the medial side, see below. 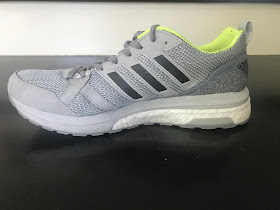 The Tempo 9 represents a next evolution of adidas Boost technology. Boost, a TPU based midsole with springy rebound has found its way into many adidas performance running and lifestyle shoes. Boost midsoles alone are soft and hard to tame. In the Tempo adidas for the first time uses a dual density Boost, with firmer material under the arch. It's called "Energized Stability". It is present and felt but not overly intrusive. It represents as far a I know the first example of a dual density Boost midsole. 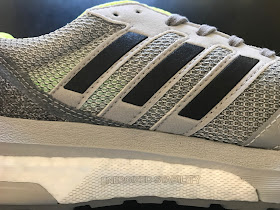 Other key features include: 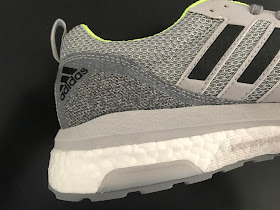 The EVA dips down earlier than the Boston on the medial side and at 60% Boost content is considerably less Boost than the 85% in the soft Energy Boost, less Boost a good thing for me.
While all this does add up to some added weight it also make the Tempos a more suitable more supportive daily up tempo trainer than the Boston with more forefoot cushioning than the adios and certainly a more fun to run and responsive shoe than the next adidas model up, the considerably heavier and bouncier Energy Boost 4 (review soon). 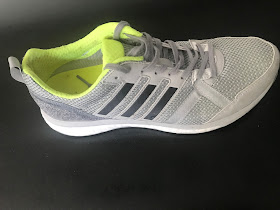 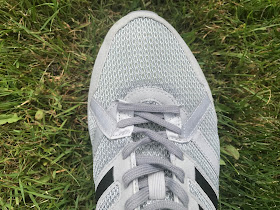 It is on the narrower side up way up front. Care must be exercised to make sure they are laced snugly as the mid saddle soft suede adidas 3 Stripes is not that substantial in thickness, even less substantial than the either the Boston or even the adios Boost. When combined with the open flexing area around the last lace up due to the adizero Webbing, I have had my foot slide forward to touch the front if they are not properly and relatively snuggly laced.
Rare that an adidas can be called relatively unstructured as this upper given adi's fondness for plastic stripes and "cages". I think they went a little to far here, even the plastic strips of the Boston at the saddle would help hold the foot better in combination with the open adizero Webbing at the metatarsals.

The heel collar is lightly padded. 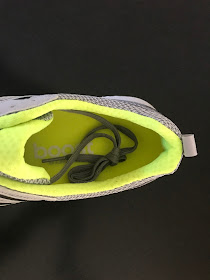 Tongue is similarly padded to the Boston but is not the slick fabric of the Boston so I have noticed less tongue slip side to side. 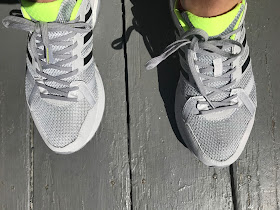 The pointy very front of the shoe is clearly noticeable in the photo above. A slightly more rounded front toe box in combination with a more substantial mid foot saddle would be an improvement although the soft suede toe bumper is accommodating.

Outsole
The outsole is adidas excellent Continental rubber here in a wide fuller coverage with square lugs. Tempo has excellent grip and contact from heel to toe, if maybe a bit overdone and adding weight under mid foo,t given all the other stability features there: Torsion plate and denser Boost 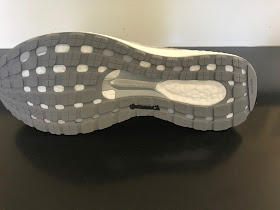 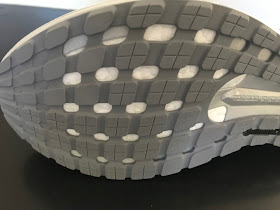 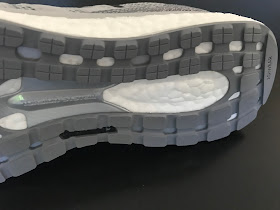 Ride and Conclusions
The Tempo 9 is what I would call a "serious" ride best for stable, secure faster training, sort of like a fine Audi or BMW. Even its understated gray and black says serious business here. It is firmer than the Boston and even the adios Boost per mm of stack, understanding the adios is of course lower by 3mm front and back due to the Tempo's thicker EVA layer and this I like.

The ride is more stable from heel to toe, and firmer than other performance Boost shoes such as the Boston. It is firmer than the Energy Boost and more forgiving especially under the forefoot than the racer adios Boost. Shock is well cushioned without being mushy. Strangely the upper does have a relatively unstructured foot hold that could use a bit more of the support and security at mid foot to lock my foot down and away from the narrow tip of the shoe.
I have run slow and fast in the Tempo and it is adept at and suitable for any pace. This is not a natural underfoot ride where maintaining good form is required to stay on track.   I felt less sloppy on longer runs as I tired than in most shoes and more directed and in the path of travel at faster tempos. It could easily be a better marathon shoe for me than the Boston, if I can lace them securely. This said, for sure, I lean towards the adios for half marathons on flatter course. It is clearly less agile than the adios Boost and heavier but also is more versatile than the Boston or Energy Boost. Recommended for neutral runners in need of a bit of stability and mild over pronators.

Score 9.7 out of 10
-0.2 for less than ideal front of the shoe hold and narrow tip of the shoe after a relatively wide rest of the upper
-0.1 for weight, the outsole could be trimmed down under midfoot, at least for me the denser Boost is not necessary and the EVA maybe made a bit thinner.

Comparisons
Boston 6 (RTR review)
While I very much enjoyed the Boston it's thinner EVA layer and lack of both the medial rear Torsion plate on the midsole and longer front Torsion medial plate makes it to soft and unstable in comparison to the Tempo 9 for me as a trainer and potentially as a marathon shoe.
Altra Impulse (RTR review)
I would give the forefoot and mid foot stability Impulse a slight nod as it is lighter and more agile for shorter distance racing, up to a half, over the Tempo.  I am fine with Altra's Zero Drop, but not day in day out or for a marathon, so for versatility the Tempo gets the nod.

Sam Winebaum's Bio
Sam is a 1:38 half marathoner on a good day and doesn't mind at all going into a new decade age group in 2017. He runs approximately 40 miles per week. He is the Editor and Founder of Road Trail Run and has been running for 45 years and has a very dated marathon PR of 2:28. Sam is also the Senior Contributing Editor for Wearable Fitness Technology at Competitor Magazine.
The Tempo was provided at no cost. The opinions herein are entirely the author's.