Apple Watch
The Apple Watch Series 2 was eagerly awaited by this runner as it is supposedly 2X brighter and adds on board GPS and swim rated waterproofing.

Battery Life
Battery life does not improve, if at all, over the original Apple Watch, now named Series 1.
Apple's official tests claim 18 hours of use including a 30 minute workout. If the watch is fully charged in workout mode Apple claims the following:

Up to 8 hours
Testing conducted by Apple in August 2016 using preproduction Apple Watch Series 1, Apple    Watch Series 2, and Apple Watch Edition, each paired with an iPhone; all devices tested with prerelease software. Tested with workout session active, heart rate sensor on, with iPhone. Using the built-in GPS of the Apple Watch Series 2 without iPhone, workout time is up to 5 hours. Battery life varies by use, configuration, and many other factors; actual results will vary.

Not to bad, but no where near a dedicated GPS watch or even the Polar M600 which is rated at 8 hours  on the run with GPS and HR and it is unclear if one can listen to the built in music player for those 5 hours.

Screen Visibility
A big issue for me with the original Apple Watch was screen visibility in sunlight.
It was far less visible than dedicated GPS watches or even the new Android Wear Polar M600. The new Apple Watch has more than double the NIT brightness at 1000 of the original. So, curious I went to my local Apple store to see one in action...

The staff member helping me had a first generation Apple Watch. We set the brightness to identical levels, the Apple Watch 2 demo unit being locked at about 3/4 brightness. Both watches were the larger 42mm size, a 38 mm size is available. We first looked at the watches inside the fairly brightly lit store. The Apple Watch 2 on the right below was clearly brighter and crisper despite having the same resolution screen as the older model. The new model has what Apple calls a "Second Generation OLED Retina" display. More on this later... Both watches have an Ion-X glass screen cover.

Next we went out in the very very brightly sunlit mall atrium and started the built in run app.

While the picture is a bit hard to see both watches were hard to read. We both agreed the older model was slightly easier to see. We were both very surprised. While this is a single test and we can't be positive the demo watch is fully up to speed,in bright sunlight , the new watch is clearly not as bright as the older one and certainly not 2X as bright in these conditions. You can see that there are 4 data fields and the most visible is the yellow color one. As with the new Fitbit Charge 2 having overly small fonts or to many data fields makes readability even more difficult in bright sun.

What may be going on?
OLED displays unlike LCD's found say on most fitness GPS watches have less reflectance. All or most all of the light you see is generated by the electricity to the pixels in the display. LCD displays have a reflective element to boost what you see. I can only assume that this second generation OLED has even less reflectance but more brightness by spec. Outside there is no way the pixels generate enough visible light on their own. Interestingly the Polar M600 while not having quite the resolution of the Apple Watch, but still very sharp has a  color TFT LCD display and has been adequate in my testing in bright light.

There is hope for runners... The Apple Watch Nike+ while having exactly the same display technology as the watch shown above,will, within the Nike+ Run Clug watch app ,have a high contrast yellow on black scheme and will enlarge the fonts to feature one key stat per screen. This should help sunlight visibility.  I wonder if they will also auto adjust the brightness to maximum when in bright light.  I would recommend that if one of the main purposes for the purchase of an Apple Watch is running you should get the larger 42mm size. I should have a sample by early October and will report back the results as the demo watch may have been less than optimized for screen brightness. 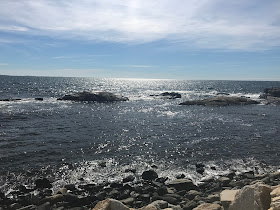 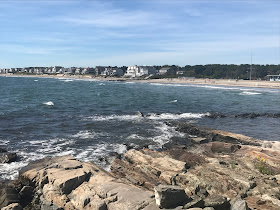 I received my iPhone 7 yesterday and of course took it out for a run today. I upgraded from a 6S and am giving it to my daughter. I updated hers to iOS 10 the day before I received my new phone and almost regretted getting the 7...
Everything seemed much faster and the new features make it like a new phone. Update: while not sure it is iOS 10,the iPhone 7, or the clean install of my back up but  battery life in day to day use is significantly longer than with my iPhone 6S.
The iPhone 7 features which seemed valuable for running were the increased water and sweat resistance, no swimming rated IPX 67 so sealed from dust and safe up to 30 minutes in 1 meter of water so even a fall into a pool as Apple showed in their keynote you're fine and of course the improved camera. While I cannot yet judge the water resistance which should mean no more zip lock bag, I did test the camera today and am very impressed with the improved quality of my pictures. While not a perfect test I even snapped a picture while running and bouncing around to test the new optical image stabilization. Here it is 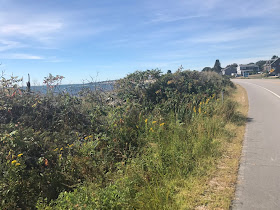 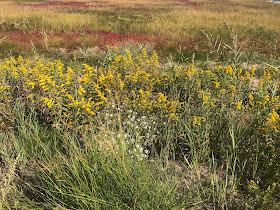 An emerging issue for iPhone use in winter. The iPhone 7 no longer has a mechanical home button so it cannot be clicked with gloves on according to this Verge article. Some conductive gloves are even said not to work. A work around will surely emerge.