One of my very first stops at OR was at Hoka One One. I have followed Hoka since 2010 and tried multiple models along their journey swimming against the now receding"minimalist" tide.  With rising popularity and  funding and energy from new owner Deckers they do not disappoint with their fall 2014 offerings.

I focus here on 3 new models (Mafate Speed, Clifton, and Huaka), with the 11.8oz Conquest just now releasing with notes on other stalwarts such as the Stinson, Rapa Nui, and Bondi all receiving or having just received updates.

Mafate Speed
This is a brand new 12.8oz.version of the original Hoka, the Mafate.  The Mafate 3 (14.7oz) stays in the line. With a supportive Speed Frame upper and a durable RMAT (blue) outsole midsole with harder rubber patches over Hoka's CMEVA under foot this is the trail beast in the line.

Update: Road Runner Sports reports the Mafate Speed will be available around July 1st, 2014 and can be pre-ordered now.


Huaka
Update 7/14:  I have been running in the Huaka, over 100 miles of road and trail. Fantastic versatile, flexible, and light Hoka that is still... a Hoka with great and now responsive cushioning.
Review here.

A 2mm drop 8.9 oz racer/trainer  with the entire midsole made of the new RMAT material. A bit heavier than the Clifton which comes in at 7.9 oz so I am guessing the RMAT is a bit denser and heavier but more responsive. Likely takes away a bit of the mushy feeling at speed in Hokas.  Some patches of harder rubber. Technically a road shoe but with more than adequate lugs for most trails.  Sage Canaday a recent convert to Hokas, and one of the top ultra runners at less than 100 mile distances, just ran a 2:22 road marathon in Huakas to finish 2nd at the difficult Carlsbad Marathon. I believe a world record for Hoka shod marathoning.  While the drop is lower than I like,  I can't wait to try Huakas potentially retrofitting them replacing the flat insole with an insole with a bit more heel lift. 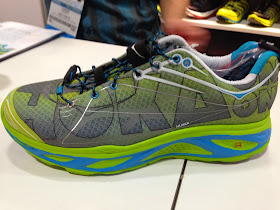 Note the deep carve outs in the outsole to reduce weight and increase flexibility.

Clifton
The Clifton will be "value" priced by Hoka standards at $130. Entire midsole is made of CMEVA. Remarkably light at 7.9 oz. 4mm heel toe drop.  This is the shoe I am most interested in as a long haul road runner and marathon shoe. The other "lightweight" Hokas the Bondi 3 and Rapa Nui 2 come in at 10.8 oz and they are fine shoes indeed.

Update: Boulder Running Company and Road Runner Sports report Hoka One One Clifton will be available around July 1st, 2014.

My understanding is that the Mafate Speed, Huaka, and Clifton will launch for Fall 2014 so July.

Across the line common themes emerge: