The Pearl Izumi N1 Trail is a 9.8 oz,  $115, highly versatile trail runner, a prototype of which took Tim Olson to a record win at 2012 Western States 100. Pearl Izumi planned to launch the E:Motion line a few months ago but wisely pulled the first production pairs and destroyed them as the midsole was too firm. At OR they offered to send me the N1 for a second look. They had  earlier sent me a pair of road N2 which I found painfully firm and along with feedback from me and others did the right thing to get it right.  They have!

The N1 is a fabulous shoe on...the road. Road because due to all the snow and slush here in NH,  I have not been able to run them on trails, yet. Adequately lugged, with a thin rock plate and with a well designed, supportive upper I am confident they will be fantastic on trails. After all Tim Olsen thought they worked just fine for 100 very fast miles.

Upper
If I recall, Pearl Izumi was the first shoe company to reduce the number of seams by using welded overlays and glued seams. Everyone is doing it now to reduce shoe weight but Pearl Izumi has really made the seamless, simple streamlined upper an art form in its N1.  The single layer mesh is tightly woven and soft. The toe box while not as roomy as Altra's has absolutely no overlays, yet is not sloppy due to a low outer bumper wrapping to a point at the first eyelet. They fit me a half size small, 9 instead of 8.5.

Some of the upper magic is hidden inside. In addition to the thin overlays on the outside, there are 4 thicker welded overlays on the inside on both sides (pink arrows)  surrounding the mid foot. Note  that in addition to a tongue lace holder further down as one would expect, there are 2 tongue lace loops (green arrows)  between the first and second lace eyelets. Tongue stays put and this system contributes to wrapping the mid foot all around.  I have the found the upper supportive without being constrictive in any way. 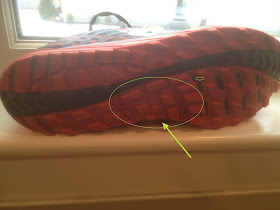 The outsole is more than adequately lugged for most terrain up to real deep mud with a small plate of outsole material (yellow arrow) under the arch for a touch of pronation support.  There is also a denser cookie embedded under the arch in the midsole from what I understand. The rock plate is visible through the forefoot above. The rear lugs are wider for what I assume is some braking effect on steep downhills.
I can report that while a bit "slappy" due to the lugs and rock plate the outsole is also fantastic on the road.  A firm ride directed ride the N1 is not pillow soft but has plenty of cushion. This is the first truly hybrid (road/trail) shoe I would not hesitate to take on any road or trail run or race up to marathon distance.

Ride and Midsole
The ride is really determined by the E:Motion's midsole geometry. I can say the geometry is super smooth and natural. I have a sensation of landing on my mid foot and then easily rolling forward to toe off. With the zero drop Atra Torin, another shoe I am enjoying running in as I prepare for Boston, I have a sensation of landing flatter on the forefoot but then having to push off and up to toe off.

Pearl Izumi prefers not to talk about heel toe drop  but with the real and distinct sensation of a  mid foot landing and then very natural feeling push off as one goes to toe off. Pearl Izumi call this "dynamic offset" and below is described in an email from Chuck Sanson, Run Guy at Pearl Izumi :

"The “dynamic” in dynamic offset is due to the unique shape. In the simplest terms we moved   the take-off point which is traditionally under the 1st met head or ball of your foot, approx 25mm rearward. By doing this we effectively created empty airspace under the balls of your feet when you are at stance. As your ankle and knee come over the top of the shoe moving forward, your forefoot falls into this dead airspace in a smoother fashion with the effect of a smoother transition and less slap."

Here is the dynamic offset and heel toe drop data for the E:Motion line:
So, the heel toe drop as measured from the mid and outsole materials is 1mm. When the forefoot is loaded at stance it has a "dynamic offset" of 4.5mm or effectively 3.5 mm. I believe this means that if the forefoot was against the ground in the picture below my heel toe drop would be 3.5 mm. Running Warehouse has the heel at 23mm toe at 16mm which I assume includes the insole. Insoles can add ramp to a shoe.

Below a picture of the Altra Torin and Pearl Izumi N1 nose to nose. The airspace under the toes on the N1 clearly extends further back.

Summary
The Pearl Izumi E:Motion N1 Trail is a smooth running trail shoe with a very comfortable supportive upper. The overly dense midsole foam problem of the prototypes is clearly resolved. I believe it will be equally adept on moderately rough trails, snow, mud, gravel, and roads.  I have very much enjoyed my first runs on the road in this shoe. The simple yet highly effective midsole geometry of the E:Motion line contributes to a distinctly fluid and natural sensation at landing, loading and toe off.

Disclosure: Pearl Izumi provided me the review pair at no charge.
Sam Winebaum at 9:25 AM
Share