Just announced.  MOTOACTV is an Android based fitness tracker with music player. Includes GPS and accelerometer (for elliptical machines only initially according to an excellent first overview by DCRainmaker ). $249 for 8gig model plus $29.99 for wrist or arm band. Comes with headphone/mic as the system will also give audio workout feedback. Optional headphones add wireless heart rate through in ear sensing.  If you have an Android phone it will notify you of caller identity on screen which you can chose to answer or not. Not really an interest of mine but includes a full music player. The MOTOACTV looks to be a very clever blend of a typical fitness GPS watch and an iPod Nano. 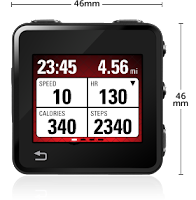 Some immediate comparisons to the Nike+GPS I currently use, enjoy, and have reviewed:


I have written Motorola for answers to the following questions:

"Can I get regular in workout stats via audio on the headset, stats in addition to heart rate?  I really miss the audio feedback I used to get with micoach on the Nike+GPS.  How would these be accessed if they work? If I had an Android phone would the loudspeaker be able to play the stats if I did not wear headphones? I usually run outside without headphones.
I like the readability of the screen. Can the screen stats be customized?
Does MOTOACTV have average pace? This was a big missing stat in the early release of Nike+GPS? How about current lap pace? A simple stop watch mode?
I see it includes an accelerometer. Can it accurately track distances run indoors on a treadmill?
Which settings be customized away from the computer? Nike+ is very limited. For example you can't change the stats lay out or the lap or interval length/time when not connected to the computer."

Update: I am seeing early online reviews indicating that battery life may be less than 2 hours when underway with GPS and music . A serious consideration for those of us who exercise/run for longer periods. Quoting a review at Amazon:

"I've taken this device on three hour-long runs now, each time fully-charged. I've returned home with the unit down to less than 25% power level. This was using the MP3 features, Bluetooth on to wireless headsets, and GPS tracking. Given this rate of battery burn, I doubt the device would last more than 1:30-2:00 which, in the world of marathon-training (and even half-marathons), just isn't enough. This is a serious issue which Motorola may be able to address with software updates but, for now, it's a deal-breaker. "
Sam Winebaum at 1:51 PM
Share