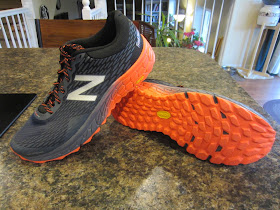 
The Ultimate Direction AK (Anton Krupicka) Mountain Vest 3.0 is a versatile, top quality, mid-high capacity running/hydration vest that is equally at home on an hour run, as it is on all day mountain adventures.  The AK 3.0 has significantly increased in capacity and function over the first two versions, aligning with Anton's shift to more gear intensive, unsupported full day outings.  With a capacity of 11.5 liters, spread throughout a whopping 14 pockets, this pack gobbles up gear in a very well thought out and organized fashion.  I appreciate that 10 of those pockets are within easy reach, either on the front straps or waist belt, which allows easy access to a multitude of necessities while on the move. 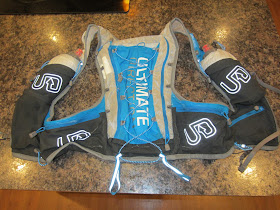 by Jeff Valliere
IceBug Anima5
9.9 oz./280 grams US men's size 9
28mm heel/20mm forefoot
19 carbide studs
$184.95
Available in both men's and women's models
Icebug is a Swedish brand, specializing in winter traction and is best known for their models with Bugrip, which features carbide studs embedded in the lugs to provide secure traction on icy surfaces.  I have been running in IceBugs for 5 or 6 years and they have become one of my most reliable, go to winter shoes.  When offered to review the newer IceBug Anima5 Bugrip, I was more than eager to put them to the test.The Anima5 weighs in at 11 5/8 ounces for my US men's size 10, which is quite a reasonable weight for a water resistant, well protected, studded winter shoe.  It feels even lighter than that both in the hand and on the foot.

Article by Peter Stuart and Patrick Caron with Sam Winebaum


Altra Running Escalante
Editor's Note: We are thrilled to offer this joint, in depth review of the Altra Running Escalante road running shoe.
Patrick Caron is a 19 year old Boston area Altra Ambassador who set the New England ultra scene on fire in 2016 with 14:51 100 mile and 6:14 50 mile victories among several others. No slouch on the road he was the top 20 and under finisher at the 2016 Boston Marathon, 2:46. He averages over 100 miles per week of road and trail running, mostly in the Altra One. Patrick works in a running speciality store so he sees and fits lots of shoes.
Peter Stuart is a frequent contributor to Road Trail Run focusing on performance trainers and racing shoes. He is a masters runner on the "late side" of the 40-49 age group. One of the strongest masters in the Los Angeles area he has a recent sub 3 hour marathon and a 1:21 half marathon.

Altra Running joins three emerging running shoe trends big time with the Escalante:
The Escalante has a catalog weight of 8.2 oz/232 g men's size 9, 6.5 oz/182 g women's 8. Sam's size 9 beats the catalog weighing in at 8 oz.
The stack height is 25mm heel/25mm forefoot so the same stack height as the Instinct/Intuition. All Altras are Zero Drop from heel to toe.
The Foot Shaped toe box is of course on board with the last following that of the Torin 2.5 and Superior trail shoe. It is intended to fit in the Altra line between the Instinct and Torin.

The EnRoute represents a new direction for Swedish brand Salming. Retaining the trademark Exo Skeleton upper, mid foot Torsion unit and great ballet line flex geometry the EnRoute takes the brand in a new direction with:
The result is a comfortable lighter daily trainer with a wonderful soft and agile forefoot held back somewhat by heel softness. 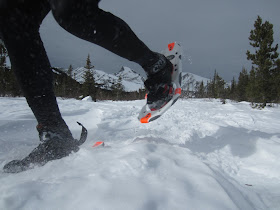 Dion Snowshoes, founded by Bob Dion and his wife Denise (both multiple time national championship medal winners), is a family owned and operated business out of North Bennington, Vermont, specializing in designing, building and selling some of the best running snowshoes on the market.  All parts/materials are made in the USA and Bob personally has his hands on each and every snowshoe that goes out the door, ensuring top notch quality control.

Dion snowshoes set themselves apart in that they are a modular design, meaning you can choose 4 different frames, ranging from the smallest race snowshoe, the 121 (the number represents surface area in square inches), all the way up to the 220 backcountry snowshoe for maximum flotation.  The 121 features a hand crafted, aircraft grade aluminum frame with sleeve joined tubing for added strength, neoprene springs on hinge for constant tension and improved articulation and lightweight, abrasion resistant decking.
Jeff Valliere at 7:45 AM 4 comments:
Share

The Escalante has a catalog weight of 8.2 oz/232 g men's size 9, 6.5 oz/182 g women's 8. My size 9 beats the catalog weighing in at 8 oz.
The stack height is 25mm heel/25mm forefoot so the same stack height as the Instinct/Intuition All Altras are Zero Drop from heel to toe. The Foot Shaped toe box is of course on board with the last following that of the Torin 2.5. It is intended to fit in the Altra line between the Instinct and Torin.


The La Sportiva Crossover 2.0 GTX is a rock solid winter running shoe, ready for the worst conditions you'll face on the roughest mountain trails, all the way down to messy road running conditions.  With a built in Gore Tex gaiter, incredible traction, warmth, amazing stability, quality and security, it may well be the finest winter shoe on the market.

Jeff and I have had the opportunity to extensively test 2 highly technical yet simple elegant run jackets in all kinds of conditions over the last few months:  the adidas Terrex Agravic Alpha Shield Hoodie ($159) and the Columbia Montrail Outdry EX Light Shell ($200). Both represent the state of the art in weather protection but with different approaches and focus.

Backstory:
In the late 90's through 2002, I just took what the trails had to offer, mostly seeking South facing dry slopes or just going slow and taking my chances on trails covered in ice and snow, occasionally knocking the wind out of myself or spraining a wrist.  In 2003, I discovered the wonders of screw shoes, drilling 3/8" sheet metal screws into an old worn out pair of trail runners.  This worked remarkably well and was inexpensive, but the screws were high maintenance, either falling out occasionally or becoming dull rather quickly, requiring frequent attention and replacement.  Even so, this opened up a whole new way to trail run in the winter. 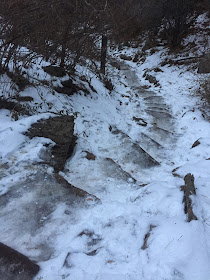 In 2008, I purchased my first pair of Kahtoola Microspikes and this was another game changer, allowing the flexibility of putting them on any shoe for just about any kind of slippery condition.  I used them for running on the local peaks when there was snow/ice and for hiking/mountaineering in the high mountains.  I did discover though that over time, when running on lots of rock and dry trail, they dull and lose their effectiveness on ice.

Then Icebugs came along and I found these to be ideal when snow coverage is spotty, as is often the case here in the foothills above Boulder.  Our mountain trails, at least the ones that I frequent the most, are often north facing and shaded, but we get warm enough temperatures during the day, the snow melts some, then combined with plenty of foot traffic for compaction and freezing temperatures at night, we get some impressive stretches of bulletproof ice.  Unfortunately, by the time this bulletproof ice sets up, 1/3 to 1/2 of the trail is intermittent bare rocky ground.  This is where Icebugs excel, as they are extremely durable, stay sharp over a long period of time no matter the abuse and the sharp studs get good grip on the ice (when the ice is particularly hard, they may slide, but it is more controlled).

With an ever expanding array of traction now on the market, there is no real reason to run on a treadmill, bail on a run, run somewhere you would rather not, or most importantly, take unnecessary risks.  Below are 4 of our favorites here at RoadTrailRun, options for any condition no matter your preferred terrain.

adidas Terrex Trailmaker
10.4 oz/295 g. US Men's size 9
24mm heel/16mm forefoot
$115.  Available now in men's and women's styles. See end of review for latest pricing,
The adidas Terrex Trailmaker is a new model in the middle of the ever expanding and improving adidas Outdoor trail lineup.  At 10.4 oz/295 g (11.4 oz for my size 10), it is no lightweight speedster,  yet it feels significantly lighter than the numbers indicate.  Given the high level of protection, cushion, support and traction this shoe offers, the slight bit of added weight is well worth it.  The Trailmaker is a true all mountain, all terrain shoe for long runs and adventures and plenty of versatility.

The Nike Vomero 12, Brooks Ghost 9, and adidas Supernova are well cushioned neutral daily trainers and share near identical weights around 10.7 oz/303 g and heel to toe drops of 10-12 mm. Obviously they are competitors! We'll attempt to sort out the subtle differences between them.


Basic Stats-courtesy Running Warehouse where you will find all the models in this article here.

First why would you select one over the others, the biggest differences