New Balance is always super professional and eager to show us their latest and greatest. "Always in Beta" is their motto and they proved true to their marketing, showing us, in particular, thoughtful refinements to the Vazee line.

Vazee 2090
Update: Read our full review of the Vazee 2090 here
First up was the Vazee 2090 a new premium Vazee ($150). 9.7 oz. Available July. The 2090 is inspired by Trayvon Bromell, a 20 year old! who won bronze in the 100 meters at last year's IAAF World Championships. He recently turned pro and signed with New Balance. He now has his own named shoe and while few of us will be running fast 100 meters, the 2090 could be a fast road runner as well. It was described as "the statement shoe" of the Vazee line aimed at the younger, dynamic athlete. Note the "NB" on the heel and not at the saddle.
Designed to be firmer and more responsive than the Vazee Pace (our review here) the 2090 has a nitrogen infused (N2) yellow TPU layer between the outsole and midsole along with a heavily cored out outsole. Shoe geeks may recall that the N2 TPU first appeared as the rock plate in the Leadville 1210. Our sense it the TPU plate gives the 2090 some firm snap as well as support.  The rest of the midsole is New Balance's excellent Revlite.

The 2090 has an unusual full saddle whose patterning New Balance termed as dynamic and based on origami geometries.
Vazee Pace v2
Changes to the popular Vazee Pace were described as "mostly cosmetic" with a new no sew woven front of the shoe.  However in addition, the outsole is now more heavily cored, "podular" so while not a huge update some changes. We imagine it will be more flexible, maybe a touch softer feeling, due to the new outsole design. Approximately. 9oz 255 grams. Vazee Pace v1 was approximately  8oz. 227 grams. NB tells us the added ounce comes mostly from the fuller coverage outsole and a bit from the woven upper.  $110. Available July 2016.

To highlight the efforts of New Balance's sponsored athletes in this Olympic year the Vazee Pace, Rush, 1400, and 1500 will be offered in cool Team Elite colors.

There is also an "urban" gray green version with gum rubber outsole. We liked the color and look! 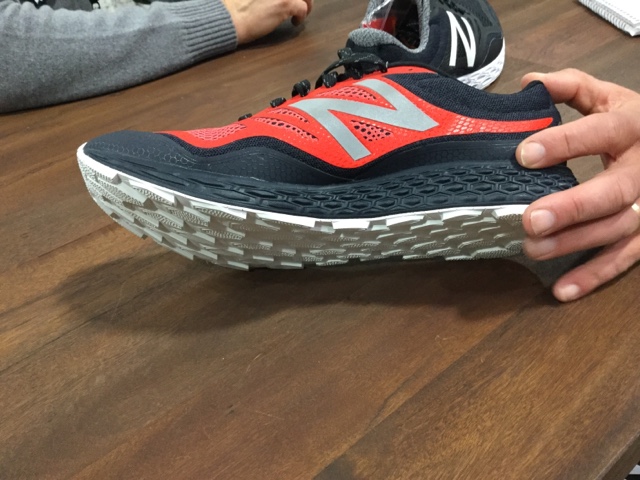