A pretty cold, wet day on the run from Hopkinton to Boston. The rain held off until about 30 minutes into my Wave 3 start.  The wind,while forecast to be about 25-30 mph, was not particularly noticeable as it was mostly a cross wind.
As always Boston was an incredible experience. The intensity of the crowds, the organization, the committed volunteers, the history, the memory of 2013 when I saw the bombs go off down Bolyston, and the dreams and efforts of all the runners all come together and were powerful every inch of the 26 miles, as well as for days before and after the actual racing. 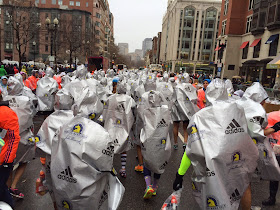 Then, the finish, the cold, the slow endless shuffle of wrapped runners towards family, friends, and  some warmth from borrowed coats, sweaters and fleece.  I was fortunate and so psyched to have my wife and daughter cheering me on, and I spotted them  at exactly the half at Wellesley and at Kenmore Square with a mile to go. My daughter pushed me all the way to the parking garage as I was pretty locked up.

My race was OK with a 3:56 with a slowdown the last 5, as usual. Really have to cross train as my hip flexors just don't do much driving forward after 18 miles. Most unusually, my GPS app and watch did not start. Maybe because I synched them to far in advance? I didn't want to pull my phone out and re sycnh on the run so decided to run without my "timing" but on feel. I went out slower than last year but a bit faster than planned but felt super enjoying the sights the whole way,  occasionally and increasingly unsuccessfully trying to do mile split math based on the digital clocks which started with the elites. Great to run without the watch but not sure I will repeat that or maybe I will.

So read on for my gear and more pictures.

The La Sportiva Mutant is a highly supportive, deeply lugged trail shoe for rough mountain terrain: loose rock, snow, mud, etc.. Yet it is also perfectly fine on smoother terrain and has been more than decent for shorter road stretches due to its soft yet stabilized cushioning. It manages to pack a ski boot bootie type mid foot wrap tongue, debris proof sturdy upper, deep 6mm lugs, and road comfortable and not overly firm cushioning into a package weighing less than 11oz -10.9 oz 309 grams size Men's 9 EU 42, Women's 9.6 oz. To accomplish all of this must not have been easy! The shoe is aptly named as it really is a "mutant" combining features of ski boots and lightweight running shoe design in neat new ways.


The Upper is the Star
The upper is one the most evolved and carefully considered for purpose, rough terrain, I have seen in a trail runner or for that matter any running shoe. The Mutant features two innovative upper technologies which to date work as intended.


First Impressions:
Putting the shoes on indoors, my first impression was how elasticated and snug the shoe feels.  Due to the sock-like fully-gusseted shoe liner/tongue construction, the laces felt almost superfluous. I could run in the shoe with the laces untied.

The Nike LunarTempo is versatile trainer and long race shoe which provides a tremendous amount of decently stable cushioning and upper at an impossibly light weight:  6.8 oz 192 grams Men 9, 5.9 oz Women 8. Retail Price $110.  It has a 8mm drop with a 26mm heel, 18mm forefoot stack. These are similar overall stacks to the Brooks Ghost and Launch, Mizuno Wave Rider, adidas Energy Boost but... at a weight 2-3.5 oz lighter!  Of course cushion to weight  ratio is not the only factor to consider, yet Nike has carefully crafted a lightweight blend that hits many checkmarks for me:


I have run 40 miles to date in the LunarTempo. These runs included a 20 mile run with middle 9 miles at marathon pace (8:30/mile) on a flat route. I did not experience my usual hip weakness and lack of drive and the run left me with no soreness anywhere, unusual and this after several weeks of back and hip issues.
Update: Lunar Tempo was my Boston Marathon shoe this year, replacing my trusty 10oz Energy Boost. I went with the true to size optic yellow pair below.  Absolutely perfect on a wet rainy day. No blisters. Plenty of cushion. Flexible upfront. Super light weight. 2 days after the Marathon I am having the quickest recovery from a marathon in many years. I did not run as fast as I planned but still put in a long hard cold effort.
Read on for details...