Sneaker Report has an incredible "museum "of their picks of the top 100 running sneakers of all time. Runblogger one of my favorite sites made his picks: Nike Free 3.0 V1, Brooks Launch, and Saucony Kinvara, all fine, very recent shoes.

I am now in my 40th year of competitive running and depending on decades have worn many of Sneaker Reports picks especially those from the 1970's and early 1980's and those from the last ten years. Quite frankly, I did not run as much from the mid 80's through about 2000 and even when I did looking at the shoes from that period they are not exactly memorable: heavy, over built with lots of "control.

The 1970's : Light, Low Drop and Fast. Sound Familiar?
Before the early 1970's running boom running shoes were leather, heavy and clunky. I was lucky that my hometown had not the only East Coast sales guy for the iconic Onituska Tiger Marathon and trainers but the same fellow, Jeff Johnson along with Phil Knight both went from being Tiger distributors to starting Nike. Jeff Johnson located original Nike R&D facility in my hometown of Exeter NH.
#1 Most Important Running Shoe of the 1970's: Tiger and Nike Marathon.  The earlier minimal Tiger Marathon and the almost identical 1972 Nike Marathon #70 were the shoes I and just about everybody else raced  track and cross country in and even trained in. The key innovations were nylon uppers instead of leather and a very minimal one piece midsole outsole combination.  The #6 Nike Waffle Trainer and #15 Cortez were also key early light weight dedicated distance shoes and deserve their rankings.
My #1 All Time Best Racer: With Nike innovating in town I tested versions of the  Nike Boston, # 31 on Sneaker Report's all time list. Mine were blue and as I recall had somewhat more midsole than the yellow model above from 1973.

This shoe while still light was a big improvement over the Marathon as it had some cushioning. I suggested to Nike they waffle my Bostons, and they did, and this is to this day it is my favorite all time racing shoe, great from short muddy cross country races to marathons. Not really much different than today's minimal Brooks Pure Project, Saucony A4, Inov-8's, etc...Note the low drop and roomy seam free toe box.

Most Timeless Running Shoe: Brutting Lydiard Marathon and Road Runner How about a running shoe that remains totally unchanged since about 1970 and is still on sale? Arthur Lydriard, the famous New Zealand coach designed a shoe in collaboration with a small German shoe maker Brutting sometime in the late 1960's. Very lightweight, made of natural materials with a supple suede (kangaroo then ouch!) leather and gum rubber outsole they are still handmade on a crescent shaped anatomical last.  I had several pairs of these in the 1970's and they were fantastic trainers and racers, stylish then and now to boot. They can be purchased from Manufactum in the UK

The 1980's: New Materials and Technologies
1979-1981 were big years for running shoe innovation. Nike's Exeter labs came up with 2 shoes that should be on anybody's top 10 list of greatest running shoes. Both shoes addressed the issue of compacting of the midsole and cushioning, yet in different ways. Early midsole materials compacted very quickly. Hard to imagine this today with the various EVA's, gels, plastic plates etc... allowing shoes to appear almost new after hundreds of miles.

The Nike Tailwind (not on Sneaker Report list) , with a retro reintroduction in 2012,  was the first shoe to incorporate Nike Air. I had several pairs and they made big miles day after day far less painful.
The 1981 Nike Terra T/C # 36 on the Sneaker Report List was also a revolution as it introduced Phylon a midsole material which did not compact as readily as previous foam and the midsole was I believe made of a single material instead of being of glued wedges. I had several pairs of these versatile trainer racers. While I don't have the weight (light) and they were not "low drop" these kicks were really no different than the #2 all time pick, the Saucony Kinvara which came out...30 years later. One might call this one of the first "modern" running shoes.

The Late 1980's, 1990's, early 2000's
I ran less in these years and looking at Sneaker Reports many top shoes from this period I quite frankly don't remember any of these increasingly heavy and clunky shoes as memorable. Mostly cartoonish design statements. And while Sneaker Report has done an admirable job in creating this running shoe  top 100 list it feels their choices are heavily influenced by the retro collectible fashion market and not performance innovations as many many top shoes are from this "dark" period of overbuilt shoes. Witness their #1 overall pick the 1995 Nike Air Max 95

In my next post I am going to roll forward to the last 5 years or so. After a good 20 years or so of stagnation the wonderful increasing popularity of running, coupled with recent innovations and changes in running shoe design and running philosophies have us in a new golden age of running shoe choice, much like I saw in the earlier 1970's running boom.

Update: Here is my post about the top trends and shoes of what I am calling a new Golden Age of Running and... shoes.

Hoka One One Stinson Tarmac: Review

I now have more than 100 miles on the Stinson Tarmacs Hoka One One sent me. An earlier review is here

This 11.8 oz, 5.5 mm heel to toe drop road specific ( smoother mud free trails fine too) is a wonderfully comfortable ride. It fits true to size for me. 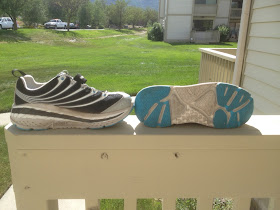 I have run in Hoka Mafate (trail) , Bondi (road), and an earlier trail/road Stinson EVO. Hoka continues to evolve staying true to their oversized yet light philosophy. The Tarmac is a big step forward in the evolution of Hoka philosophy:


So why in an age where "minimal" running is all the rage ( or passing rage in my view) wear Hokas, the most extreme of oversized, cushioned shoes? I like to say they feel very natural, like running on grass...on the road or the rocky trail. On the trail, no rock punch through and total confidence on the downhills due to the wide stance.  Despite their super cushion they are not mushy and unresponsive. The rolling gait required by the stiffer outsole, once easily mastered, is very natural and smooth. This could  be a wonderful shoe for runners and walkers with chronic hip or knee pain due to the shock attenuation and stability. A great shoe to do big or recovery miles in as no matter the distance the next day my legs are considerably fresher than in other shoes.  For me the shoe for slower and longer miles.

Next up speedy Hokas.  Ian Corless blog reports a 2013 model the Rapa Nui Comp trail runner which will come in at around 9.7 oz as well as the Kailua Comp road runner, likely a bit lighter. While maintaining Hokas oversized approach, tuning it down a bit as in my 2012 favorite trail runner the Tecnica X-Lite,  these new models will likely be shoes that bridge the gap between oversized comfort and protection, and speed.  Can't wait.

If you want a pro's thoughts on Hokas check out Karl Meltzer's video here. Karl is an old pro winner of dozens of 100 mile ultras including 4 this year alone.

Back in August my Nike+ Sports Watch GPS stopped synching. I wrote about the issues here. It turned out that a combination of my update to Mac OS X Lion and the Nike Connect software prevented synching. Online posts told me this affected early watches. I bought mine the very first day it was available.

I contacted Nike and even though my watch was long out of warranty and without acknowledging the issue they sent me a new watch. Works like a charm. Only differences in hardware I can see is that the buttons are firmer and less likely to be mistakingly tripped by errant fingers.
Sam Winebaum at 1:35 PM 1 comment:
Share
‹
›
Home
View web version