The Tour du Mont Blanc is a 6-10 day trek of approximately 100 miles around the base of the Mont Blanc, Western Europe's highest mountain at almost 16,000 feet. The trail goes through France, Italy, and Switzerland and features varied and spectacular scenery. (See some pictures below)
While the climbs are arduous the footing is generally much smoother than in the White Mountains of NH and there are no technical climbing areas. And, at the end of each day huts with showers, beer, wine, great food, and friendly fellow hikers can be found to recharge the battery and rest the feet. Huts are reasonably priced at about $50 per night with dinner, breakfast, and bunk room accomodations. About $10 more per person for rooms for 2-4. Reservations are a good idea. The Cicerone guidebook described below includes all the phone numbers. We used a mobile to call ahead when we determined where we might end up for the night.

We completed the trek in 6 days at the end of June 2005. Doing the Tour in 6 days is tough involving 10 hours per day of steady hiking. Of course, more leisurely versions are possible with most completing the trek in 10 days or so. Ideal timing is last week of June as snow is mostly off the passes and the crowds reasonable.

The trail features multiple "variations", all listed in the guidebooks and on the maps. Do them all if weather permits as often they cover somewhat higher routes and are truly spectacular. The variations include the Col du Tricot, Col des Fours, Col Sapin, and the capstone the Fenetre d' Aprette. 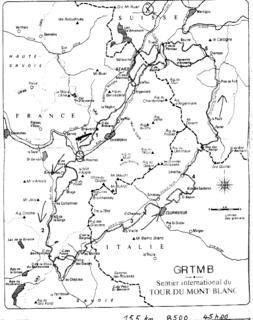 Click to view map-# indicate location of end of each day of our trek in 2005. See pics below
Guidebook: Cicerone Guide Tour du Mont Blanc is the best English language guidebook. Series also includes other superb English language guides to treks in the Alps and elsewhere. Of course there are any number of guided trips, some as we saw complete with donkeys to carry gear. REI, Wilderness Travel, etc.. all organize such treks. This said it is easy to go "unsupervised".

Gear: Travel light. We somewhat overpacked. Good non Gore-Tex (due to heat) light hiking boots are vital, trail running shoes possible but not recommended due to time on the trail daily. Otherwise 2 or 3 rapid drying t-shirts, shorts, wool socks, a fleece, and water proof shell are all you need. Do bring a pack towel and soap for those great end of day showers. A light weight sleeping bag liner is essential for the huts. Plan on a hydration bladder or a Nalgene and bike bottle. We clipped the bike bottle to the pack sternum harness for on the go sips. Wrap a decent amount of duct tape around a water or sun tan lotion bottle. Duck tape is fantastic for blisters and fixing just about anything. Quite literally there is no need to carry much more than would fit in a decent sized daypack. Note of course that doing the Tour earlier in June or in the fall might mean somewhat warmer clothes.

To give readers a day by day feel for the adventure: 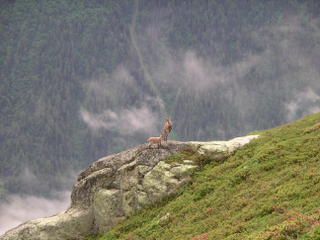 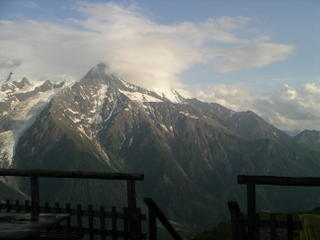 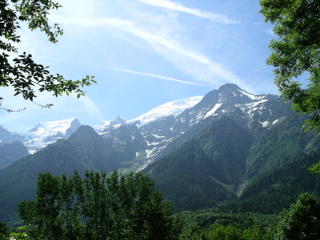 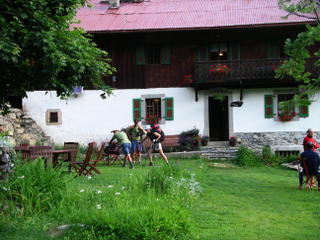 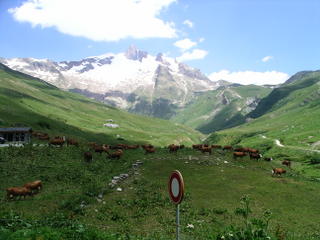 On the way to the Col de Seigne and Italy 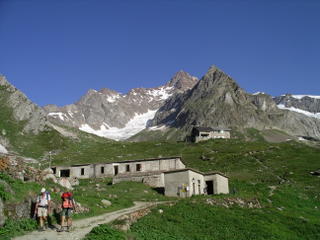 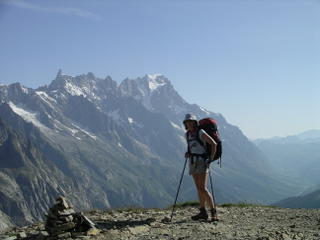 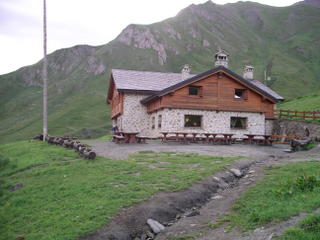 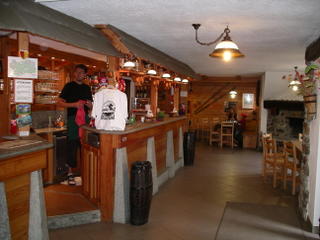 Who says hiking has to be miserable
The bar at the Refugio Elena. We stopped for an expresso on the way up the Col Ferret 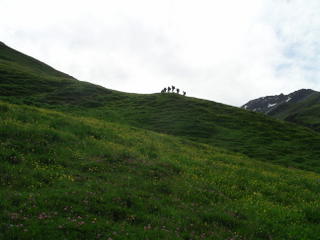 Hikers headed up Col Ferret towards Switzerland from Refugio Elena 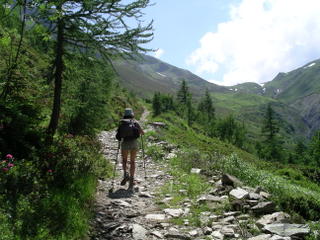 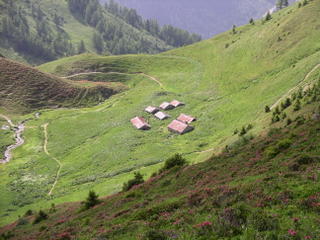